It stood to every political and strategic reason that President Vladimir Putin would announce a major decision opening the Victory Day military parade at the Red Square. Over the years, he has altered the meaning of this holiday from celebrating the allied triumph in the struggle against Nazi Germany to celebrating the might of Russian militarism. 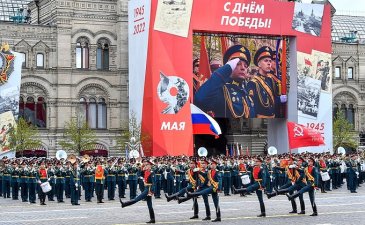 In 2005, some 150 dignitaries, including US President George W. Bush and UN Secretary General Kofi Annan, attended the event; in 2021, Tajikistan’s President Emomali Rahmon was the only guest of honor, and this year, Putin was alone.

He had obviously planned for a very different moment envisaging the spectacular success of the “special operation” against Ukraine, launched on February 24, as his only ally, Aleksandr Lukashenko, brutal dictator of Belarus, confirmed poignantly (Izvestiya, May 6).

The apparent failure to conquer even the whole territory of the Donetsk region made it impossible to pretend that the invasion was progressing according to plan. Yet, it was exactly what Putin opted to do.

Propaganda […] cannot […] pretend that the long-planned breakthrough […] has indeed happened

Tanks rolling under the Kremlin walls reminded vividly about the charred armor littering the roads to the north and east of Kyiv, remnants of the defeat which is never shown on the Russian TV.

Propaganda can cover some embarrassing setbacks and maintain that cruiser Moskva sunk because of a fire onboard and that the Ukrainian counter-offensive around Kharkiv isn’t happening (Charter97.org, May 7). It cannot, however, pretend that the long-planned breakthrough from Izyum to Slovyansk, which the chief of Russian General Staff Valery Gerasimov tried to direct personally, but was interrupted by an Ukrainian artillery strike, has indeed happened (Krym.Real, May 4).

Officials from Moscow can make extra-short visits to the Kherson region and announce that Russia “has come here forever” (RBC.ru, May 6). This bragging cannot camouflage the failure of the offensive push toward Odesa, which leaves the exhausted grouping of Russian troops on the western side of River Dnieper vulnerable to Ukrainian counter-attacks (RBC.ua, April 26).

Russian command needs reinforcements in order to prevent a spontaneous rout of the beaten and demoralized battalions that are barely able to hold under Ukrainian fire, not to mention attack the fortified position, but Putin didn’t even order the troops partaking in the parade to proceed to the battle, as Stalin did in November 1941 (Graniru.org, May 8).

Putin didn’t even order the troops partaking in the parade to proceed to the battle, as Stalin did in November 1941

That could have been a symbolic gesture, but the only way to bring the overstretched and under-supplied grouping to the combat strength is to call the war by its real name (dropping the pretense of “special operation”) execute a partial or total mobilization (Meduza.io, May 6; EDM, May 5).

Such a step was expected by many experts, including in Ukraine, but from the strategic point of view, it would have been rather too late, as newly mobilized reservists would need many weeks of retraining, and newly-strengthened Ukrainian artillery wouldn’t wait that long (RBC.ua, May 7).

From the economic perspective, such order would be very difficult to implement, not least because nobody in the government knows how to run a war-time economy, while there is plentiful expertise on managing financial flows and manipulating budget distribution (Novayagazeta.eu, May 6). Putin’s oligarchs may be worried about sanctions and upset about their frozen assets in the former “safe havens”, but they most certainly have no intention to mobilize their business empires to serve the war needs (Svoboda.org, May 4).

The Kremlin has no way of predicting how the society would respond to a sudden shift from the “business as usual” mode to the “enemy at the gate” alarm and so habitually engages in preventative denials of any intention to announce mobilization (TASS, May 6). In the climate of escalating repressions, there is no way of getting reliable data on public attitudes, and opinion polls tend to supply the picture that the authorities want to see (Kommersant, May 5).

Support for the “special operation” is dubious and mixed with the prevalent desire not to know about the unfolding disaster and to pretend that the crisis would somehow resolve itself (Riddle, May 4).

The May 9 festivities loaded extra-heavy with patriotic propaganda are supposed to deliver a boost to the national unity, but the unavoidable reflections on the old victory in the situation where the new one is so obviously denied can have the opposite effect (Meduza.io, May 7).

For Putin, as well as for most of his courtiers, it is much easier to communicate with older generations responsive to the references to the glorious Soviet past, than to impress upon the younger cohorts that they need to march into the inferno of war (The Insider, May 5).

He relies heavily on polished and falsified historical narratives, but cannot recycle old myths so smartly that they would capture imagination of youngsters, who live in a cultural environment entirely foreign to him, and the denunciation of popular bloggers and rappers as “foreign agents” doesn’t help (Republic.ru, May 8).

Putin also cannot fail to see the direct hit on his abuse of history delivered by President Joe Biden, who signed exactly on May 9 the legislation on lend-lease to Ukraine, reminding about the massive help granted by USA to the Soviet Union in the darkest years of WWII (RBC.ru, May 6). The expansion of Western aid to Ukraine is not just an irritant for Putin, but an impact that can change the course of the war, and he cannot comprehend why his persistent nuclear threats fail to dissuade the risk-averse and dialogue-inclined Europeans (Russian International Affairs Council, May 5).

The Red Square parade […] set a record in aggressive posturing and falsity.

The Red Square parade was less numerous and exhibitionist than usual, but it set a record in aggressive posturing and falsity. Putin used to excel at pretense and manipulation, but this time he has started a real war, and apparently has no clue about how to lead it.

This failure of leadership is particularly striking in comparison with the outstanding statesmanship and moral integrity demonstrated by Ukrainian President Volodymyr Zelensky.

The solemn Victory Day has acquired new meaning this year, and Putin opted to spin his war-mongering message around the jingoist slogan “We can repeat”. Zelensky found stronger and more noble words: “Never again”.

Ultimately Putin has led his people into a disaster. Russia, during WWII ended as an ally of the US and most current NATO countries. He and his advisors/Oligarch pals refused to listen to retired Russian Generals/senior officers (who could really fight) and deluded themselves into thinking their 70% cut of the defense budget and billions spent on yachts wouldn’t affect military performance. They have all crushed Russia’s future and the lives of their own military officers and enlisted men. Absolutely the most corrupt government on earth.

The USA, NATO, and Ukraine would crush Russia in a conventional declared war. And Putin is not the kind of leader to risk his own life at the front. He and his minions deserve to be lined up and shot. Sadly, the peasant mindset of most Russian people will not let them comprehend a different future for Russia. The 20-30% who do and have resisted Putin should probably reconcile that they cannot change what a majority of people want. Time to get out, state your reasons, and migrate somewhere else. Sad all around For all to be led by such a corrupt mob. No sympathy for the Oligarchs and corrupt senior officials who have destroyed Russia by their timidity and lack of influence. Time to recall some retired Generals and people who care about the Russian people.