Modern wars are decided, according to Russian military strategy, in the high-intensity initial period, and the multi-pronged offensive into Ukraine was indeed launched with the aim of achieving a decisive success in the first couple of weeks.

As the war crossed the symbolic 100-day watershed last weekend, nothing resembling a victory was discernible on Russia’s strategic horizon, even if the aims have been reduced to conquering the desolate territory of the Donetsk and Luhansk regions. 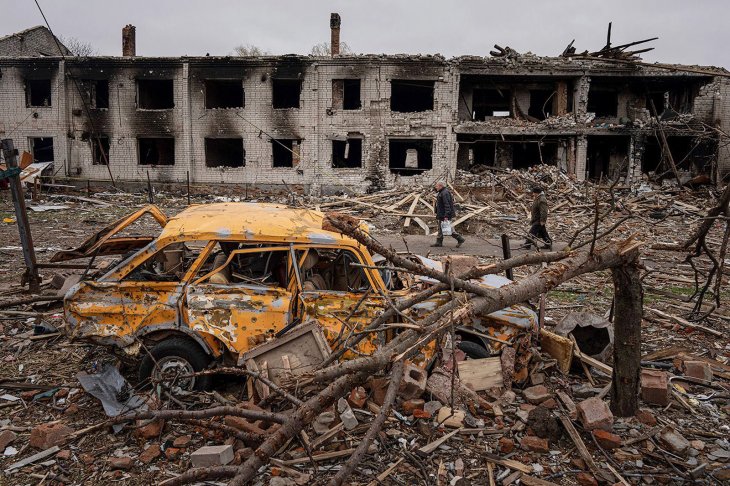 Russian troops keep pushing into the ruins of Sievierodonetsk behind heavy artillery barrages, but cannot deliver anything like the elegant enveloping operations so highly valued by Russia’s military theorists (Svoboda.org, June 3). The sequence of minor tactical successes over the last couple of weeks may in fact bring closer a strategic defeat, as tired battalion tactical groups take more casualties and can only be merged together rather than reinforced due to the lack of reserves (Riddle, June 3).

Russian command has given up on concepts describing the modern battlefield as an interplay of high-tech weapon systems and falls back on the Soviet field manuals prescribing massive application of firepower. This archaizing of operational planning is accompanied by de-modernization of force structure as legacy weapon systems are reintroduced and such vintage armaments as the T-62 tanks are recovered from old depots (Ferra.ru, May 30).

The Russian air force can neither establish control over airspace nor provide effective ground support, so it is artillery that dominates the open but densely built-up grounds of the battle for Donbass (Meduza.io, June 3). Numerical advantage in the big guns is still on the Russian side, but the accelerated delivery of various Western artillery systems, including US M777 howitzers, will soon give the Ukrainian army a significant edge (Izvestiya, May 19).

What makes Russian command even more nervous is the US decision to supply Ukraine with M142 HIMARS guided missiles with a range of 70 km, which could punish the Russian tactics of amassing artillery on fixed positions (Svoboda.org, June 1).

The Kremlin has issued a stream of warnings about the risks of escalation being heightened by the delivery of US missiles (RBC.ru, May 1). US President Joe Biden pointedly excluded the possibility of supplying Ukraine with medium-range missiles that could strike deep into Russia’s territory, and President Volodymyr Zelensky has denied any intentions of executing such attacks (Nezavisimaya gazeta, June 1).

The real aim of Russian warnings is to exacerbate concerns among the presumably risk-averse Europeans and to convert the natural fatigue with the protracted war into reluctance to sustain and increase support for a hard-pressed Ukraine.

Moscow pundits have eagerly interpreted Henry Kissinger’s opinion on the need for Ukraine to buy peace with territorial concessions as evidence of Western pressure on Zelensky for accepting Russia-dictated compromises (Valdai club, May 30). Such wishful thinking makes a big leap from the reality of the unwavering European embrace of the defiant Ukrainian stance, and even French President Emmanuel Macron, frustrated with the futility of his telephone diplomacy, has told President Vladimir Putin that his decision to launch the invasion constitutes a “historic mistake” (RBC.ru, June 3).

Disagreements among the Europeans are […] less tumultuous than usual

Disagreements among the Europeans are serious, but in fact less tumultuous than usual. Last week, the EU managed to approve the sixth package of sanctions, disappointing many expert opinions in Moscow (Kommersant, May 30).

The main content of this package (besides a long list of personal penalties) consists of various restrictions on the export of Russian oil and gas, and the documented commitment of most EU member-states to reduce or eliminate the dependency upon these supplies in the shortest possible time goes further than most observers had expected in a situation of market volatility and rising inflation (The Bell, May 31).

This resolve is underpinned by the assumption that the Russian energy sector will be hit so badly by the departure of Western partners and service companies that oil and gas production will sharply contract as a result, meaning that Russia will no longer be a reliable supplier (Rosbalt.ru, May 31).

The inevitable decline of petro-revenues will be painful for the Russian budget, but it is not necessarily the most impactful economic setback.

Russia’s transport system is becoming progressively disorganized by the breakdown of supply chains and the closure of many plants built by Western companies, which have opted to discontinue business in Russia, and millions of car owners are beginning to experience the consequences of this first-hand (The Insider, May 30). Putin held a government meeting (virtually, of course) last week with the traditionally underfunded agenda of road construction, but the allocation of proverbial truckloads of roubles cannot advance it much in the absence of the necessary equipment and technology (Kommersant, June 2).

Rising anger among the top brass

Putin appears to have no better grasp of the depth of Russia’s economic problems than of the costs of the head-on military offensive, but he has fewer concerns about the exasperation of his ministers than about the rising anger among the top brass.

He cannot blame the generals for the failure to conquer Donbass and unleash Stalin-style purges because the pool of experienced commanders has been depleted with casualties, and replacing them with loyal Siloviki from special services is not an option (Meduza.io, June 1). Defense Minister Sergei Shoigu continues to command respect in the officer corps, and he is aware not only of the frustration among the fighting generals with the lack of reserves and resources, but also of the discontent in the vast state bureaucracy caused by the ineffectual leadership persisting with denials of the unfolding disaster (Svoboda.org, June 2).

Putin’s war has undeniably become unwinnable, whatever spin the agitated propaganda puts on every square kilometer of “liberated” Donbass.

Ukraine shows not only courage and tenacity in defensive battles, but also strategic patience in letting the tired Russian army exhaust its last reserves in senseless attacks, while training fresh battalions armed with Western weapons. The threat of a penetrating Ukrainian counter-offensive is apparent for the Russian command, but they cannot prepare defensive positions because the orders demand a continued push forward.

Neither the gradually degrading economy nor the badly damaged military machine can sustain a protracted war of attrition, and this is the course Putin is committed to. His only hope is that Ukraine will break under the pain of bombing, but he is never able to understand the unbreakable will of the Ukrainian people to uphold their state.

I think the most likely military trend in coming months is stalemate. At that point a cease fire should be negotiated, possibly leading to a DMZ following the Korean precedent.
Then attention can shift to rebuilding Ukraine.

I think the most likely military trend in coming months is the continued bleeding of Russian attackers, followed by counterattacks by the newly increased manpower and equipment of the Ukrainian Army, supported by their Air Force which has been mostly withheld from confronting the Russian Air Force in direct combat. After the Ukrainians have decisively defeated the Russians, a peace deal will be negotiated before a cease fire, and it will be enforced by EU/US directly.