The problem of humiliating Russia too deeply, by ensuring its defeat in the war against Ukraine, is more serious than just an unfortunate turn of phrase by French President Emmanuel Macron. 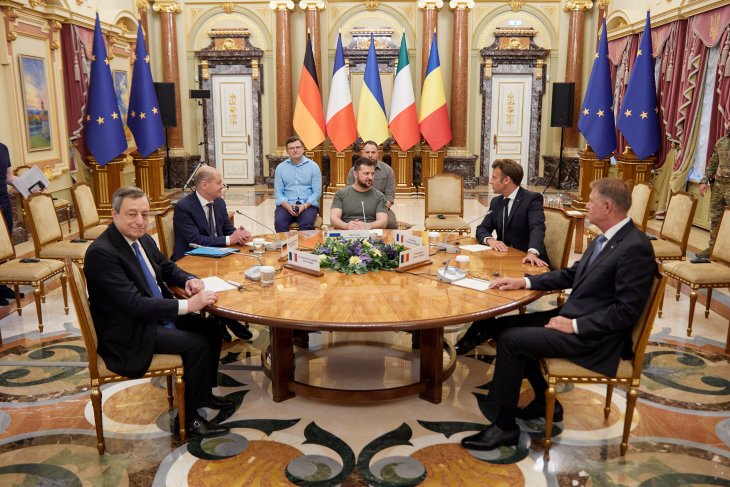 The matter of what kind of defeat Russia is capable of accepting without resorting to desperate (a convenient euphemism for nuclear) measures and, accordingly, what kind of victory is feasible for Ukraine, continues, nevertheless, to loom large.

A sequence of humiliations

So far, the war has brought Russia nothing but a sequence of humiliations of different kinds. Those on the battlefields, while being the most painful, are – rather counter-intuitively – the least impactful in the big political picture.

The botched offensive on Kyiv and the chaotic retreat were covered up by propaganda. Putin still claims that all goals of the “special operation” will be achieved (MK.ru, June 17). The loss of the flagship of the Black Sea fleet, cruiser Moskva, was explained away as an accident (the parents of the lost sailors are still kept in the dark), and new Ukrainian missile hits on supply ships near the Snake Island are simply ignored (The Insider, May 31; Meduza.io, June 17). No information on casualties has been given, even though journalists have collected data on 3,798 fatalities from social networks, and no explanation for the replacement of the command of the Airborne Forces, which suffered badly in the initial phase of the war, has been provided (MediaZona, June 17; Chita.ru, June 17).

The same pattern of denial of disagreeable realities is applied to the international dimension of the war, but here the Kremlin is often forced to exercise awkward backpedaling from earlier ambitious positions.

Preventing further NATO expansion was elevated as a major goal of Russia’s policy, but now, as Finland and Sweden are proceeding with their decisions to join the Alliance, Putin finds it opportune to downplay the issue, while mainstream pundits argue that the accession is by no means a done deal and that Turkey is perfectly positioned to block it (Russian International Affairs Council, June 15).

Similarly, Ukraine’s aspiration to join the European Union was condemned as unacceptable, but presently, as France and Germany have taken a common stance and the status of a candidate state will be officially granted to Ukraine, Putin shrugs it off and only declares that the EU has completely lost its “political sovereignty” (Izvestiya, June 17). Nuclear threats are often invoked, but there is no correspondence between this brinkmanship and Western collective actions The new increase in supply of heavy weapons to Ukraine agreed last week at the meeting in the Ramstein format called by US Defense Secretary Lloyd Austin was followed by rather timid statement by Putin, saying that nuclear weapons would only be used to protect Russia’s sovereignty (RIA-Novosti, June 17).

Humiliations in the economic sphere

It is in the economic sphere that Russia is subjected to the most punishing humiliations. Putin devoted most of his speech at the St. Petersburg Economic Forum last week to lambasting Western sanctions and asserting their utter counter-productivity (Kommersant, June 17). His declarations on the resilience of the Russian economy were a mix of misinformation and misrepresentation.

The positive trade balance – one of his bragging points – is a result of drastic contraction of imports, which is detrimental for many industries (The Bell, June 17). It may be possible to re-open the iconic McDonald’s restaurant in downtown Moscow under a different brand, but the airspace industry is severely affected by the breakdown of supply chains, and “cannibalization” of some Boeing and Airbus planes for spare parts can only help that much in keeping the air traffic going (RBC.ru, June 17). The worst humiliation at the rather deflated forum was delivered – unexpectedly – by Kazakhstan’s President Kassym-Jomart Tokayev, who firmly ruled out any possibility of recognizing such “quasi-state territories” as Donetsk and Luhansk (Kommersant, June 17).

Putin swallowed that pill stoically, as many before, but he is keener than ever to present every failure of his policy as a humiliation of the Russian people, blaming the West of fanning and sponsoring “Russophobia” (RIA-Novosti, June 17).

His attempt to re-forge a national unity around the cause of confronting the West is far from successful, and the attitude in the propaganda-assaulted society to the costs and symbols of the “special operation” remains ambivalent. Nothing resembling a “patriotic” enthusiasm is induced by Putin’s increased public appearances (Svoboda.org, June 11).

Russians are, nevertheless, sensitive to such sanctions as the ban from the Eurovision Song Contest and the exclusion of Russian athletes from the Wimbledon tennis tournament (Championat.ru, May 24). A more balanced position has been taken by the International Chess Federation (FIDE), which has disqualified Sergei Karyakin, outspoken in his support for Putin’s war, from the candidates contest in Madrid, while Ian Nepomnyashchy has been granted an opportunity to compete(Nezavisimaya gazeta, June 16). Such nuances matter for debunking the lies spread by the noisy, but far from numerous, “war party” in Russia, and for deepening the discontent in the “party of silence” (Meduza.io, June 17).

Concerns in the West regarding “humiliation” of Russia are typically underpinned by the reflections on the rise of an aggressive nationalism in Germany, punished by the Versailles Treaty that ended WWI in 1919. Such worries are largely misplaced because Putin has already exploited the bitter disappointment in Russia of the fruits of reforms that followed the collapse of the Soviet Union to the maximum, and tries to channel the feelings of ressentiment into support for his “special operation”.

The pool of such perceptions is in fact rather shallow, and the sequence of setbacks on all fronts of the war has increased doubts in the Russian society about its real aims and rationale, rather than adding to the urge to gain a victory.

The anti-war sentiment grows from a far richer background of Russian culture than Putin’s propaganda can draw upon, and it is essential to nurture these sources of strength in order to turn the forthcoming defeat into a victory for a rehabilitated Russia.

Thank you for your succinct assessment of the situation. I recall what you said at the CSIS May 18 2018 conference and all your “dark” assesments have come true.
I do hope the NATO and CSIS and all the stakeholders will pay close attention to your insights into Putin and Russian aggression. They are the instigators of what’s happening in growing conflict.
Best regards