Even though men make up the majority of gun violence perpetrators, most men will never fire a gun in an act of violence. What explains this range of behaviors among men, and does masculinity play a role in determining motivation for men to commit acts of violence? 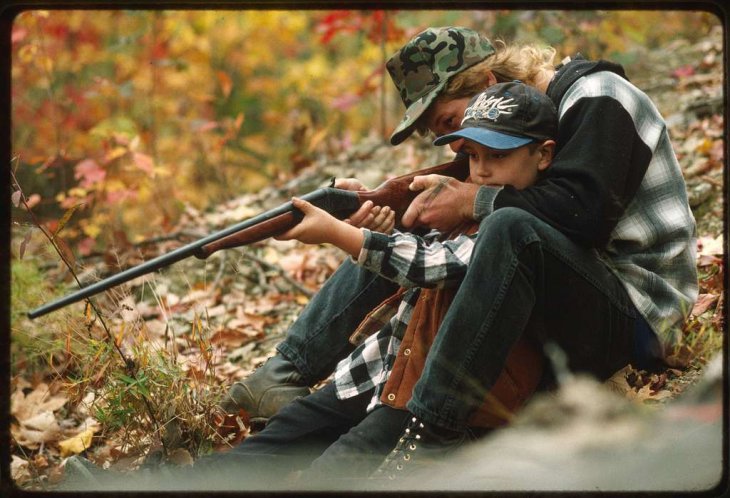 Most men will never fire a gun in an act of violence. Photo: Lyntha Scott Eiler / Library of Congress via Picryl

Understanding this dynamic necessitates looking at the interplay between gender, guns and violence. In doing so, we highlight three important arenas:

On May 14th, a white 18-year-old man drove 2.5 hours from his hometown to a small grocery store in Buffalo, NY, where he then proceeded to kill 10 people, the majority of them being black. While this attack is being investigated by the FBI as a racially motivated hate crime, many have highlighted how masculinity played a role in this mass shooting.

There have been a number of mass shootings globally by white men who have referenced this theory, including in Norway and New Zealand. Moreover, researchers have highlighted how these men held certain misogynistic ideas of what it means to be a man, arguing that this played a role in why they committed their act of violence. It is important to recognize the specific ideological connection these three attacks (and many others) share rather than viewing them as isolated events. Masculinity played an important role in all three events.

Globally, men, and especially young men, constitute the overwhelming majority of perpetrators of lethal violence. However, identifying the small number of men who become killers among the masses is difficult. For example, while a relationship can be observed between economic inequality and violence, many men living in inequal societies will never commit violence.

… the type of manliness that a man identifies with, and aspires to, separates the more violent men from the rest.

Research on masculinities provides part of the answer to the interrelated questions of why maleness seemingly drives violence, and why this driver of violence applies more to some men than to others. A recurring finding is that the type of manliness that a man identifies with, and aspires to, separates the more violent men from the rest.

Researchers have found that ideals of manhood that combine misogyny and masculine honor – the notion that real men must be fierce and use violence to deter disrespect – are associated with violent attitudes and behaviors.

For example, endorsement of masculine honor ideology predicts participation in political violence; misogyny is strongly associated with support for violent extremism; men with gender-inequitable ideals of masculinity are more likely to be rapists; individuals with hostile attitudes towards women, and towards gender equality in general, are more prone to intolerance towards other nationalities and religious groups; young men who hold masculine beliefs that violence is an appropriate and legitimate response to disrespect and insults to honor are involved in more violent crime.

In particular, the relationship between masculinity and guns may help to explain why men and boys carry out mass shootings.  For many, guns are simply tools for protection, or a piece of sports equipment. For some, though, firearms are a means to express masculine identities.  Twice as many men are gun owners in the U.S., and surveys of gun owners show that among them men are more likely than women to watch TV programs or visit web sites about guns.

Interviews help to further unpack the relationship between gun ownership and masculinity. When economic circumstances prevent an individual from playing a traditional role of the family breadwinner, men say that they have turned to guns as a way to assume the role of the armed protector, or as a source of individual empowerment or social meaning.

For some, a history of being bullied led to the use of gun ownership as a means to maintain and protect what they perceive to be a desirable form of masculinity based upon personal honor.  Others found guns to be an attractive means of dealing with both threats to their own sense of masculinity and to perceived disadvantages to men as a group. Specific research on school shootings finds that the boys who were the perpetrators had been victims of bullying and had been “socialised to see violence as a way to prove their manhood”. All these clues suggest that the men or boys who commit mass shootings may be fascinated by guns and perceive that they can use firearms as a means to assert their status and importance in what for many is the final act of their own lives.

Understanding why the majority of mass shootings are perpetrated by men, but also that most men will never assault or kill anyone requires a gender perspective.

Gender research today helps bring nuanced understanding of the varied roles of men and masculinities in violence, and what types of men are drawn to violence. These findings can help create a better understanding of how harmful notions of masculinity develop, and how this issue can be addressed in the hope of avoiding the horrific deeds that keep being perpetrated.