In his essay Pacifism and the war, George Orwell wrote that “pacifism is objectively pro-Fascist.”, because “[if] you hamper the war effort of one side, you automatically help that of the other. Nor is there any real way of remaining outside such a war as the present one.” The war that Orwell was talking about in 1942 was, of course, World War II.

This quote has been buzzing in my head over the last week. After more than 100 days of war in Ukraine, while the battle for Donbas is raging at full force with significant Russian gains, we are seeing renewed debate about how far western countries should go in supporting Ukraine. 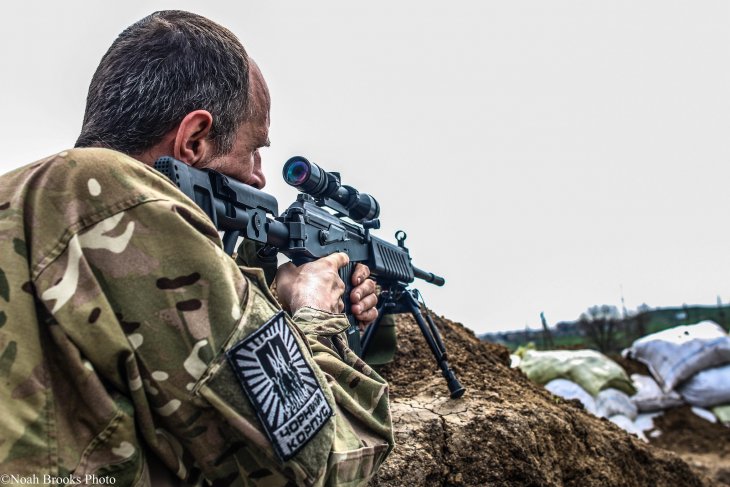 Following near unanimous agreement among western countries at the start of the war on providing strong support to Ukraine, we are now seeing a growing ambivalence in public opinion in Europe. France and Russia are signalling that Ukraine must make territorial concessions, a view that finds support among intellectuals on both the right and left of the political spectrum, to take Henry Kissinger and Noam Chomsky as examples.

In Norway, several politicians and commentators have argued that military support will help only to prolong the war and increase the likelihood of a confrontation between Russia and NATO. Rødt (the Red Party) is one of the political actors supporting this view, but the Norwegian government too has signalled great caution in supporting Ukraine. In general, it has been the slowest off the starting blocks, as exemplified by Norway’s reluctance to take in wounded Ukrainian soldiers. Several researchers, including Julie Wilhelmsen, have warned against increased military support as posing a risk of escalation.

This moderate approach contrasts with the more maximalist position, which advocates supporting Ukraine with arms “to the bitter end”, until Russia can be driven out of the country and Putin can be straightforwardly defeated.

The road to a stable peace

The moderate approach is essentially an example of consequentialism. It is based on the assumption that increasing military support will lead to greater bloodshed and misery, and also increase the chances of war on a larger scale. Given the stakes, we must take these concerns extremely seriously. As a conflict researcher myself, I have a strong instinctive aversion to the idea of fueling an ongoing conflict by adding more weapons and military material. In addition, I have a fundamental belief that negotiations must be the primary means to achieve peace.

… as a researcher, I also have a powerful obligation to follow where
theory and the
empirical evidence lead.

But as a researcher, I also have a powerful obligation to follow where theory and the empirical evidence lead. And so I have concluded that western countries should do what the Ukrainians want, namely, provide Ukraine with military support until the Ukrainians themselves can drive the Russians out. This conclusion is not only morally right (Ukraine deserves our support), but it is also smart: it is based on a realistic analysis of the Putin regime, and in the longer term will lead to less bloodshed and the greatest likelihood of peace.

Sound arguments for and against providing increased support to Ukraine must be based on a theory about the Putin regime and a theory about what can end a war.

The most credible model of the regime is that it wants regime change in Ukraine and a de facto annexation of the country. In addition, we can conclude that Putin is badly informed, cynical and reckless, but that he is also opportunistic and potentially can be deterred with clear military signals. His regime seeks survival at any price, and will use propaganda to “spin” any defeat in Ukraine.

Increased military support will not prolong the war

It is easy to fear that increased military support to Ukraine will prolong the war. But this is not very likely, because the Ukrainians, regardless of military support, will continue to fight against the Russians with all the means at their disposal so long as the Russian invasion continues. This is the lesson of the superpower invasions of countries such as Afghanistan and Iraq. A Ukrainian defence that continually increases the costs for Russia and that can drive Putin out will shorten the war.

A credible theory as to what puts an end to war is that the violence will often continue if at least one of the parties sees agreement as more costly than continuing to fight. An important implication is that a peace is only stable if the parties can give each other credible guarantees against future aggression.

… it is not primarily supplies of weapons in themselves that cause wars to escalate, but uncertainty and miscalculations on both sides …

Behind this whole debate about supplying weapons, lurks the issue of nuclear weapons. Could unlimited Western support for Ukraine escalate the war to a nuclear superpower conflict?

No, because it is not primarily supplies of weapons in themselves that cause wars to escalate, but uncertainty and miscalculations on both sides of a conflict. For example: if Russia miscalculates NATO’s reaction to a deliberate attack on Poland, this could trigger a spiral of violence between the parties that could quickly get out of control. In contrast, supplying more weapons to Ukraine will contribute to reducing uncertainty about NATO’s willingness to fight back. What could really lead to an escalation of the conflict is if uncertainty about the parties’ willingness to fight and credibility increases through the conflict.

Strong military support also sends clear and valuable signals to other superpower dictatorships that are considering invading a democratic country. Currently, the Chinese leadership is watching closely to see whether Western support for Ukraine remains strong or crumbles over the coming months. Giving strong support to Ukraine now will serve as a credible deterrent to similar attempted invasions, and will encourage China to think twice before any invasion of Taiwan.

… the Ukrainians […] are saying what Churchill said during World War II: “Give us the tools and we will finish the job”.

And we must also not forget that maximalist support is what the Ukrainians themselves are asking for. They are saying what Churchill said during World War II: “Give us the tools and we will finish the job”. They don’t want to relinquish territory or subject themselves to the dictates of the superpowers. They have seen what happens to the inhabitants of areas occupied by Russia.

In the coming months, we will see increased wobbliness in western countries about providing military support to Ukraine. This will be the result of rising prices and high living costs that can be attributed partly to the war, and because many people will also grow weary of coverage of the war and turn their attention elsewhere. This is Putin’s dream scenario. He is banking on Russia being able to sustain losses for longer than western populations will be willing to help Ukraine.

Accordingly, we must realize that reducing military support, or increasing pressure on Ukraine to relinquish territory, will not bring about lasting peace. Negotiations can only succeed if Ukraine is strong enough to deter continued Russian aggression. The road to peace involves providing resolute and steadfast military support to Ukraine.

The objective should be a military stalemate in the western Donbas, with demilitarised zone managed by UN. After Putin departs, the issue can be renegotiated. It is unrealistic to try for Ukraine recapturing all of Donbas and Crimea.

” The road to peace involves providing resolute and steadfast military support to Ukraine.” is a contradiction, a Realist approach to international relations that has yet to find an improved alternative. Using hard power can never guarantee future harmony between states.