Somalia has not held multiparty elections since late 1969 when the military seized power from a democratically elected government in a bloodless coup.[1] The military remained in control until 1991, followed by thirty years of civil war and political instability. 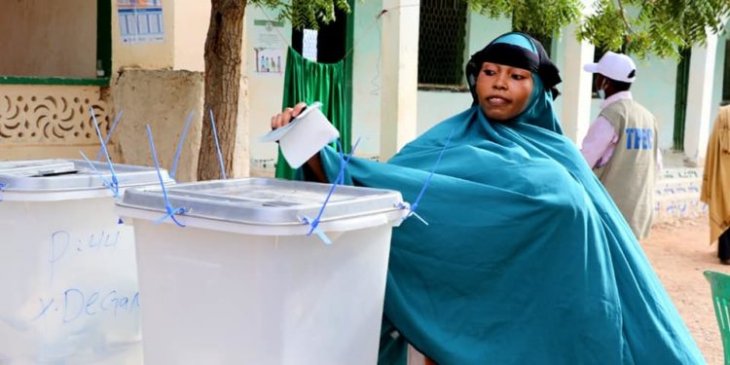 After the collapse of the central government, major clans, notably those in the northwest and northeast of the former Somali Republic, retreated to their stronghold territories and formed administrations that restored law and order and provided basic public services. Somaliland (1991) and Puntland (1998) were the first of these administrations to be established.  These two administrations have begun to elect political representatives through indirect elections in accordance with informal clan power-sharing models. In Somaliland, the clan elders and delegates selected leaders, including members of parliament (MPs) and the president. In the case of Puntland, MPs handpicked by traditional elders elected a President.

It took about ten years for Somaliland to transition from an indirect to a direct multiparty electoral system. However, Puntland is still struggling to realise the aspiration of its founders that a direct election (based on the principle of ‘one person one vote’) should be held within three years.

In this perspective blog, we analyse why Puntland has failed to conduct a ‘one person one vote’ election for over 24 years.

Puntland, located in northeast Somalia, was founded in 1998 at a clan conference in Garowe city. The clan delegates signed a national charter (axdi-qarameed) – a social contract – which stated, inter alia, that Puntland would become the first federal state of Somalia. It also decreed that the office term of the first president will be three years, during which the president should draft a new constitution and transition Puntland to “qof iyo cod” [‘one person one vote’] elections. In 2001, the Puntland Parliament approved a draft constitution replacing the national charter and in 2012, it succeeded in having its provisional constitution approved by 480 delegates. The new constitution reaffirmed that Puntland is a democratic state where people would elect their leaders through direct elections. Articles 39-47 of the constitution details the election procedures. While holding direct elections at the end of the third anniversary of Puntland’s establishment seemed an ambitious dream, it underlined that the founders of Puntland envisioned a democratic Puntland where leaders are elected based on the ‘one person one vote’ principle.

Between 1998 and 2021, despite the efforts by leaders to lay the foundations for the new Puntland State of Somalia, including establishing state institutions and structures, Puntland has been facing obstacles to realising transitioning from a clan-based indirect electoral system to a multiparty direct electoral system. The state has a history of falling into an electoral and constitutional crisis every time it attempts to transition. The first and second attempts, including attempts made by President Abdirahman Faroole in 2012, were met with armed resistance.

Despite challenges, Puntland’s third attempt in 2021 by president Sa’ed Deni is considered a triumph as he managed to hold peaceful and democratic ‘early’ elections in three districts. There are potentially two main factors that enabled the success of Sa’ed Deni’s attempts.

Puntland needs to proceed with great caution in its transition

Puntland has made commendable progress
toward democratisation.

Considering Puntland’s futile attempt to transition to direct elections for more than two decades and given the successful elections in Eyl, Ufeyn and Qardho districts, Puntland has made commendable progress toward democratisation. Over the next year, Puntland aims to complete its inchoate democracy and conduct elections in over thirty districts. However, there is also a risk that this gain may be undone due to increasing opposition to the process by influential former leaders and other political stakeholders.

It is important that Puntland, the Federal government and the international community provide the necessary resources to ensure the success of the district-level elections that are currently underway. The political space in Puntland may be quite volatile in the transition process, and it is therefore important to ensure that the democratisation process proceeds with caution and good electoral conduct. This is vital not only for Puntland’s democratisation but also for Somalia as Puntland is the key member state spearheading the country’s local council elections. The Federal government and the international community need to actively support Puntland’s transition process financially, technically, and through mediation and facilitation of dialogue between different political factions.