Global mining uses more than 57.000 km2 of land. This area is likely to expand in the coming years due to a rising mineral demand for low-carbon technologies. 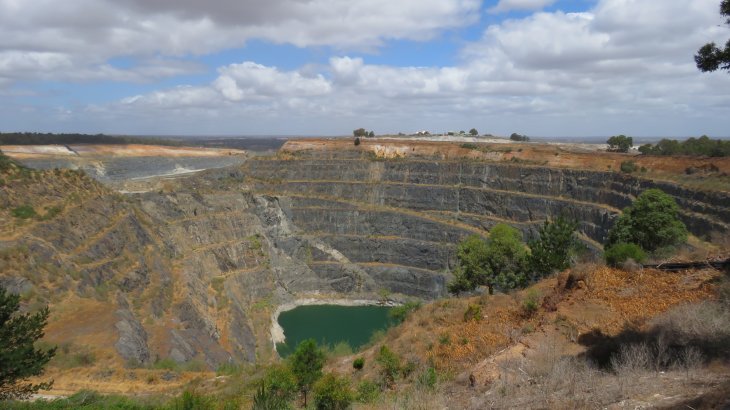 The open pit of the Greenbushes mine, Western Australia, seen from the public mine lookout. Photo: Calistemon / Wikipedia / Calistemon / CC BY-SA 4.0

The more strategic minerals become, the more critical the land becomes below which they are found. This poses a number of challenges.

How strategic geographies of minerals and metals are for renewable energy technologies became apparent at the recent COP27 in Sharm-el-Sheikh. The European Union (EU) used the event to launch partnerships with Namibia and Kazakhstan to strengthen raw material supply chains.

During the same week in mid-November 2022, increased demand for land to mine was addressed at an important inter-governmental conference on mining in Geneva. At the Intergovernmental Forum on Mining, Minerals, and Sustainable Development (IGF), a smaller number of government officials, mining industry representatives and civil society discussed critical minerals in the energy transition. A clear message was conveyed that critical minerals are indispensable: we must mine them, and there is no alternative. But this time around, mining must be different: mineral wealth must benefit all citizens, not harm the environment, and help to bring about an energy transition – there must be a “Triple Win”.

… there is a growing rush for minerals, and consequently a real risk of negative impacts on biodiversity.

At the IGF meeting, Ro Dhawan, CEO of the International Council on Mining and Metals (ICMM), promised that the mining industry is committed to take the three “wins” seriously. Dhawan raised several critical issues that must be addressed.

Above of all, mining should under no circumstances lead to biodiversity loss. As he stated: “Minerals are critical, but we must mine them as if they were not. Because if we do, we make sure we don’t overrun communities. It is our responsibility to do it as if they were not.”

But there is a growing rush for minerals, and consequently a real risk of negative impacts on biodiversity. Over 300 new mines are needed by 2035 to meet demand for graphite, lithium, nickel and cobalt to manufacture electric car batteries. How can more mining mean less or even no impact?

A mine is not simply a mine

One issue is the heightened potential for conflict over land, as mines require vast tracts of areas to operate. A mine is not simply a mine.

A mine requires space for tailing dumps and water ponds to store waste, as well as infrastructure like housing, health and working facilities, and sometimes even golf courses. A mine needs refining plants, and roads to transport the minerals to a port.

Furthermore, a mine needs a lot of energy. The mining industry accounts for 4% to 7% (scope 1-2), and almost 30% of the global greenhouse gas emissions (scope 3) respectively.

More mining heightens the pressure on available land and ecology. At the same time, climate change itself multiplies risks and exacerbates social issues, insecurities, conflicts, and injustices, for example through droughts and land degradation. Land is a dilemma often not considered in a mineral intensive energy transition – regardless of how critically they are mined.