In the early 2000s, numerous migrants arrived in Spain, attracted by the prospects of finding a job in the country’s booming economy. They quickly grew to represent 11% of the total population in 2008, from 2% in 2000.

But when the financial crisis hit and Spain topped Europe’s unemployment rates, immigrants became disproportionately affected – 35% were jobless, compared to 22% among people with Spanish or double nationality. 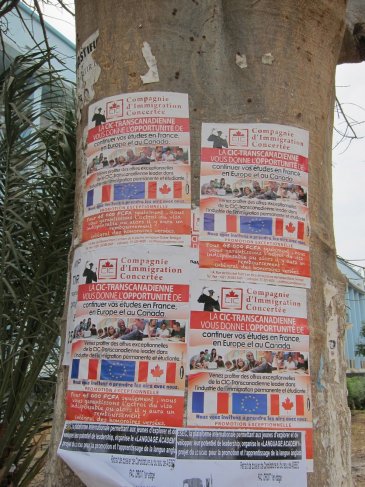 Posters advertising the services of the Concerted Immigration Company, from Canada. They offer the opportunity to continue one’s studies in “France, Europe and Canada”. They claim to be the “leader in the industry of permanent and student migration.” It was taken on the campus of the University Cheikh Anta Diop in Dakar. Photo: María Hernández Carretero

Years earlier their labour had been needed and welcome, but as discontent set in some Spaniards started calling for unemployed (especially if also paperless) migrants to “go back” to their countries of origin, now that no jobs were to be found. Some did leave Spain, whether to return to their country of origin or seek better luck elsewhere. Yet many others stayed.

Faced with an economically bleak and politically hostile landscape in Spain, why did so many immigrants choose to stay all the same?

This question was part of the starting point for my chapter in Hope and Uncertainty in Contemporary African Migration where, focusing on the case of Senegalese migration to Spain, I look into why for some, deciding to emigrate can be easier than returning home.

Is return a better alternative to staying?

“Even though you didn’t find what you were looking for here, you can’t go back just like that! If you do, what are you going to do with your life, then? […] Going back now without certainty… And you’re at an age when you’re no longer allowed to make mistakes. You shouldn’t make mistakes. Do you understand? Since you made a mistake by coming here, don’t make a mistake in your return!”

Babacar*, like many other migrants, arrived in Spain in the 2000s hoping he would find the opportunities to build himself a better future. By 2012, he had neither a job nor reliable prospects of finding one, but he did not consider returning to Senegal empty-handed to be a viable option. He would go back if he had the necessary savings to start his own business, he explained, but returning with no money and no certainty that he could sustain himself would for him be senseless: it would only compound his failure at making it in Europe and, as his words above express, amount to a double mistake.

Return, as leaving, is indeed largely a matter of resources and opportunities. Access to financial, monetary or social resources makes it easier to go back, whether temporarily to assess the conditions for a more durable return, or to stay permanently. Possible income sources or housing security in Senegal, or an open door to re-entering Europe, all decrease the uncertainty associated with cutting the migration project short. Migrants who, for example, had saved money, started a business or built (and paid-off) a house in Senegal, had a family business there they could lean on, or had permanent residence in Spain or Spanish nationality faced an easier choice between staying or returning.

Lat, another Senegalese migrant, explained that whether going back to Senegal was a preferable alternative to staying in Spain at the time of the crisis really depended on what one was returning to. Going back to the same situation that one left back home could be “worse” than staying in Spain, he assured me. Landing back in Senegal without savings to start one’s own business and without prospects of finding employment in a setting with few employment opportunities is not simply a regression to the point of departure – a point of livelihood uncertainty and bleak future prospects. Returning in such circumstances can, as Lat explained, in many ways be even worse. It is a regression compounded by the failure of having had the highly-coveted chance of improving one’s situation through migration but failed at doing so, and having to admit that defeat and lack of progress in front of one’s family and wider social circle. In this sense, returning empty-handed would not only be a failure but a risky undertaking too.

Return as the time to show results, not take new risks

When Babacar talks about not wanting to make a mistake in his return and relates this to his age and the original act of emigration, he is pointing to a way of thinking common to many Senegalese emigrants: return is the point when the success of the migration project is evaluated – especially by migrants’ social circle back home. Since at the time of speaking he feels that leaving in the first place might not have been the right decision, it is all the more important for him to not return as a failed migrant, with no savings from his time abroad and no prospects of making a living in Senegal. From Senegal, Europe and more generally “the North” represents a place of wealth and opportunities. Lavish foreign lifestyles fill TV-screens. Successful migrants and businesspeople bring back money, gifts, flashy clothing, electronics and home appliances, cars, business investments and even materials to build houses. The idea of the West is associated with money and opportunities on which those coming back are expected to have cashed and then at least partly redistribute among others back home.

Babacar also refers to the fact that, while it is acceptable for youths to explore and take chances to build their future, adults are expected to display responsibility through solvency and the ability to provide for their families. Return is therefore not the time to take new risks. Neither is it, for most, something to be done impulsively or rushed, lest one disappoints one’s social circle and loses face in front of all for having been unable to display proof of a successful time abroad. In this light, an unprepared, unsuccessful return might, in fact, be a worse prospect than staying in Europe. Abroad, one can continue struggling alone, away from the judging gaze of one’s social circle back home. Remaining in Europe also allows keeping alive the hope that better times might still lie ahead.

Giving up Europe, giving up hope

“What I was looking for, right now . . . there is none of it: work. There is no work. But . . . Africa is always difficult. Here, it’s difficult, I know. But Africa is always difficult. Because over there, your family is there, you’re seen, you’re surrounded by ten people . . . and they see you, and you have nothing to give them. [He pauses, then chuckles] But when you’re here, they don’t see you. But you can talk to them and relieve them. Give them hope. For . . . yes, give them hope to wait . . . that one day things will be good. And they can feed on that hope.”

The words of Pape, another migrant, reflect how returning to Senegal without having met one’s migration goals would mean putting an end to the hope that not only migrants but also their families have placed on the migration project. They also illustrate how important this hope is for families in coping with everyday hardship in Senegal.

Given the huge, and increasing, difficulty of entering Europe for would-be migrants, many of those who have already succeeded in entering are reluctant to relinquish the possibility to stay in or re-enter Europe. Irregular migrants, especially, could not return to Europe after leaving. The images along Europe’s borders suggest what a profound loss of effort, hope, time and resources this would represent. The difficulty, or impossibility, of crossing the border is likely to make it less attractive to leave Europe in times of hardship to assess prospects for returning back home. This has been shown to be the case along the US-Mexico border where, as border security increased, Mexican migrants with residence permits in the US continued to circulate back and forth between the two countries, while fewer irregular migrants did.

Confronted with the choice of enduring a precarious life abroad and facing the shame of returning empty handed, some might therefore choose the former – or at least delay the latter as much as possible. As some described it, patiently enduring hardship abroad while keeping open the possibility of a different future signals perseverance and masculinity through a commitment to finding the means to forge oneself a good life and help one’s family. By contrast, many fear that going back without achieving this would appear as merely giving up this quest and the hope it bears.

*All migrant names are pseudonyms.

This text was first published on the Migrating out of Poverty blog 21 June 2017.