Just a week after his 90th birthday, Gene Sharp passed away 28 January. 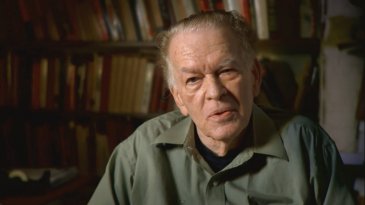 Gene Sharp has been called the “Machiavelli of Nonviolence” and “the Clausewitz of Nonviolent Action.”

The magazine New Statesman once described Gene Sharp as the “Machiavelli of Nonviolence” and Thomas Weber labelled him “the Clausewitz of Nonviolent Action.” Who was this man, and what did he contribute to our understanding of the use of nonviolent tactics in large-scale societal conflicts?

Gene Sharp completed his baccalaureate in 1949, just a few scant years after the close of World War II, and quickly turned his attention to the study of nonviolence. After serving nine months in prison for being a conscientious objector to the Korean War, Sharp secretaried for A.J. Muste. He next joined the editorial team of Peace News in London before accepting an invitation from Arne Næss to join him in Oslo with Johan Galtung and others to study the philosophy and practice of Mohandas Gandhi. Throughout this time, Sharp exchanged letters with Albert Einstein, deepening his understanding of and commitment to nonviolence.

While in Oslo, Sharp devoted much time to interviewing teachers who had resisted the Quisling government during the Nazi occupation of Norway. Through these interviews, Sharp began to formulate the ideas that would come to constitute his major contribution to nonviolence theory. Moving away from a strictly philosophical, moral, or spiritual nonviolence in the vein of Gandhi, Sharp turned instead to a pragmatic nonviolence. The rest of his life would be spent delineating and analyzing the practical tools of effective nonviolent action.

“the bible for nonviolent activists”

After his years in Oslo, Sharp pursued his PhD at Oxford University. In 1968 he defended his thesis, The Politics of Nonviolent Action: A study in the control of political power. He continued to develop his thesis work, and five years later Porter Sargent published his monumental work The Politics of Nonviolent Action, from which “198 Methods of Nonviolent Action” is taken. This book from 1973 has been called “the bible for nonviolent activists” and is still in print nearly 50 years later. Through this and myriad other writings, Sharp contended against a normative approach to nonviolence, where the practice of nonviolence is formulated as a spiritual directive. Nonviolent action need have no moral impetus to be effective; nonviolent actions may be pursued on a purely practical basis on the grounds that they are simply the most effective tools available to social and political movements. Indeed, much research by Sharp and others has shown that, in the long term, nonviolent revolutionary achievements are far more permanent than those fought with kalashnikovs and guerrilla warfare.

Indeed, much research by Sharp and others has shown that, in the long term, nonviolent revolutionary achievements are far more permanent than those fought with kalashnikovs and guerrilla warfare

nonviolence could … effectively replace all militaries

Taking this a step further, Sharp maintained that nonviolence could not only resist and overthrow dictatorships or occupations, but could effectively replace all militaries. By thoroughly training the civilian populace in nonviolent strategies and tactics, a nation could make itself ungovernable at will. If such a nation were to be invaded, it could never be subjugated. Those in powerful positions can punish but not force individuals to follow their orders without a certain level of cooperation. As history has shown, people practicing total noncooperation will only serve to drag down their oppressor. The burden of an inoperative state outweighs the benefits of its occupation.

This part of the heritage from Sharp is less known and accepted than his works on nonviolent actions by actors outside the state. Sharp worked hard to convince politicians around the world of his position. Despite some positive feedback from Sweden, Norway and the Baltic states, however, the discussions never moved from the fringe to the central political agenda in any country. The main argument against a national, civilian-based defense might be that such an “army” could also be used against its own state. Does the government trust its own people enough to enable their use of nonviolent actions on a massive scale? Many doubt that they could! We may hope, however, that these ideas came at the wrong time in history and that future discussions will give them the credit they deserve. The revitalization of research on nonviolent actions after the so-called “Arab Spring” might make such discussions possible.

Though he may not have convinced governments to adopt nonviolent training, it is clear that grassroots political and social movements have taken up Sharp’s writings with a passion. The last fifty years have seen the steady spread of Sharp’s fingerprint in movements around the world. When Gandhi and his movement liberated India from the British colonizers in 1947, their use of nonviolent actions was an exception among revolutionary groups. An important shift in strategy took place in the late seventies and early eighties, however. When the Shah was forced to leave Iran in 1979 and Solidarity organized the workers in Poland in 1980, we saw some exciting examples of movements that based their struggle on nonviolent strategies and tactics. To what degree these movements were familiar with the works of Gene Sharp, we do not know. What is clear, however, is that revolutionary movements in the next four decades adopted a broad and ever-broadening range of nonviolent actions and strategies — those same strategies Sharp had been elucidating.

Later, when several of Sharp’s key works were translated into dozens of languages, his ideas indisputibly inspired thousands of suppressed people searching for ways to fight for their freedom, rights, and for democracy. The removal of president Marcos in the Philippines in 1986, the liberation of Eastern Europe and dismantling of the Soviet Union after 1989, the first Intifada in Palestine in 1990–91, the Colored Revolutions following the fall of Milosevic in Serbia in 2000, and the uprising in the MENA region from 2011 onwards all evidenced deep understanding of practical nonviolent revolution. Journalists, activists, academics, and politicians then found a new interest in these fascinating regime changes and their theoretical sources. For each and all of them the works of Gene Sharp now became obligatory — and enlightening — reading.

When Sharp began his study, peace research was a small, odd branch on the academic oak. A hardly visible twig on that branch focused on nonviolence. Seventy years later, the field has expanded to be a significant part of several academic disciplines. It has also moved beyond the university campus, reaching suppressed people around the world and turning theoretical ideas into practical tools for social movements. Sharp’s lifelong research and voluminous writings have played a crucial role in this development.

When, at the age of 84, Sharp received the 2012 Right Livelihood Award, he humbly played down his role as a source of inspiration for the twentieth century’s swell — and the twenty-first century’s tsunami — of unarmed revolutions and social movements. He did note, however, that for the first time in his entire life he found himself interviewed by journalists who at least understood what it was that he was talking about.

His contribution to the field of nonviolent actions will forever be seen as a milestone equivalent to the first humans landing on the moon. A majority of present researchers in the field of nonviolence have benefited enormously by building on the works and theories published by Gene Sharp. Many of us have now lost a friend and many more lost an important source of inspiration.