This weekend, decision-makers from all over the world will come together to discuss current and future security challenges at the Munich Security Conference (MSC), which has become the major global forum for discussion of security policy. At the conference, Save the Children will launch its new report The War on Children: Time to End Grave Violations against Children in Conflict. The report is based on a new mapping of children in armed conflict conducted at the Peace Research Institute Oslo (PRIO).

Our findings are quite alarming: we find that more than half the world’s children are living in conflict-ridden countries, and furthermore, one in six children live in close proximity to where the actual violence occurs.

Children are Hard Hit by Conflict

Children are often and severely affected by armed conflicts. We are constantly reminded of this through pictures and news reports from the ongoing conflicts in Syria, Nigeria, Yemen, and Somalia. The UN has defined six ‘grave violations’ of children in armed conflict. These include killing and maiming, recruitment of child soldiers, sexual violence, abduction, attacks on schools and hospitals, and denial of humanitarian access. In addition to being directly exposed to killing, physical harm, and illegal recruitment, children also suffer more indirectly from the consequences of war. Children living in conflict-affected areas often miss out on education, lack access to clean water, and suffer from mortality risks due to illnesses and malnutrition, or lack of vaccines and medical care such as basic maternity services. 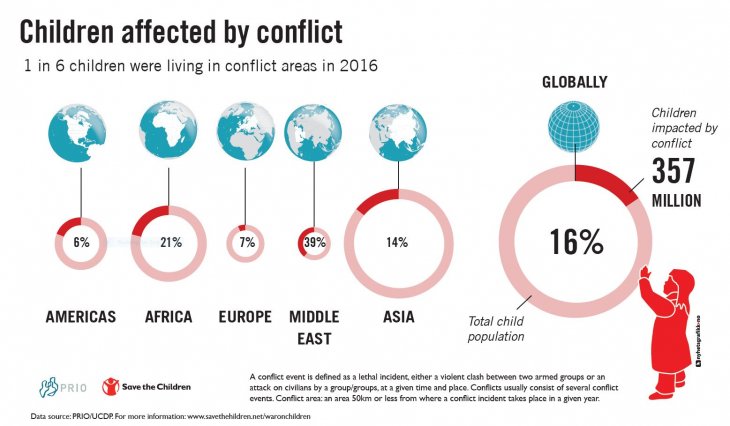 Children affected by conflict (Save the Children). Data source: PRIO/UCDP.

Since the mid-1990s, the issue of war’s impact on children has been high on the international agenda. Despite this, we do not have systematic and detailed information on the numbers of children that are killed in armed conflict worldwide. However, we do have quite detailed information about where, within countries, that conflicts take place. Hence, we can say something more certain about the number of children that live in conflict-affected areas, or ‘conflict zones’.

Combining detailed information on the location of violent conflict events from the Uppsala Conflict Data Program (UCDP) and population data from CIESIN (2005) and the UN (2017), we have been able to estimate the number of children that live in close proximity (defined as 50 km or less) to where conflict events are taking place.

The main findings from our mapping exercise include the following: 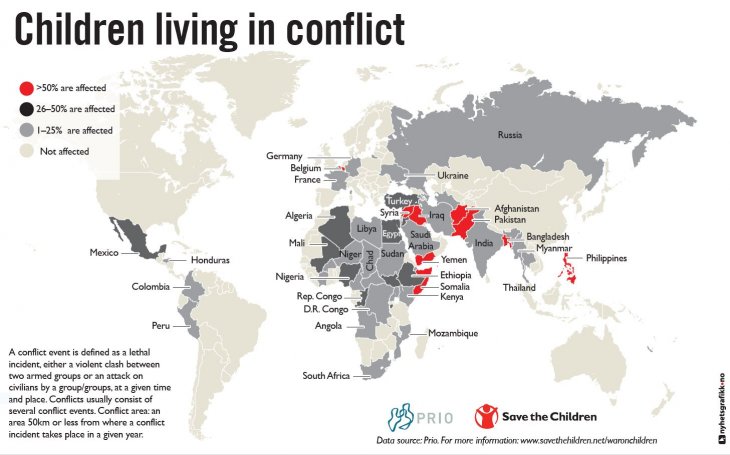 Our initial mapping of children in conflict-affected areas has several implications for policy and further research.

First, the actors who are actively working to address and reduce the impact of war on children need to support the generation of more systematic knowledge on the various ways in which children are affected by armed conflict, both directly – through killing and maiming, child soldier recruitment, and sexual exploitation, and indirectly – through adverse health effects. In short, more resources should be invested in generating and managing data related to children and armed conflict across time and space.

Second, there is of course an urgent need to protect the more than 350 million children that live in conflict zones today. Concrete recommendations in this regard include the following:

You can read the full PRIO background report here. For a shorter overview, read our PRIO Policy Brief.

For more information, read Save the Children’s full report on The War on Children.

100% of children in the US are living in a “conflict zone” with a threat to get executed by white male.

100% of children in the world live in a war zone under active psychological, financial and physical warfare