How might decolonising the academy intersect with academic everyday practice, for instance in the context of migration studies? As efforts to decolonise the academy are gaining force, not least in universities in the United Kingdom, such as at the School of Oriental and African Studies, questions about how this timely intellectual scrutiny can or ought to affect academic everyday practice should be pondered. Especially in relation to how the ‘decolonise academia’ initiatives help foster greater knowledge and understanding, thus stimulating and furthering academic inquiry.’ 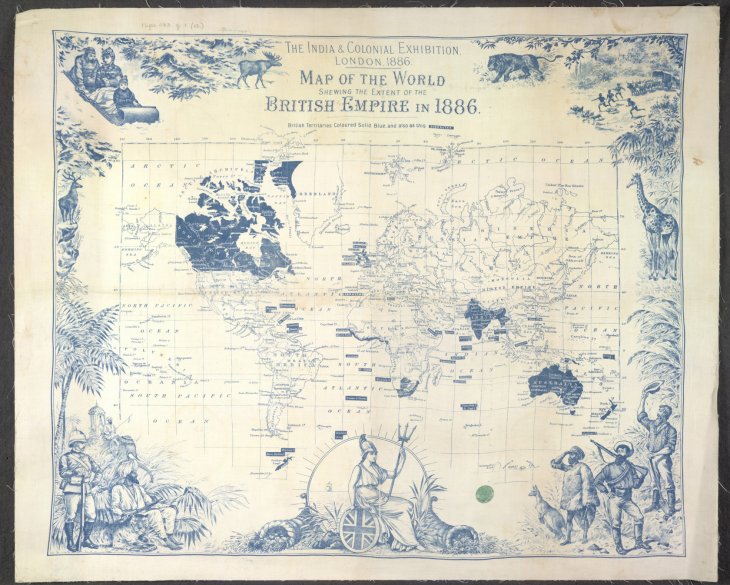 Map of the British Empire from the India & Colonial Exhibition in London, 1886. PHOTO: The British Library

When we discuss decolonising the academy, we are talking about power, and more specifically power hierarchies. So, we are discussing unevenly distributed power when it comes to defining knowledge, which inevitably leads to skewed knowledge, to incomplete knowledge.

Empires in the plural

We know of the British empire, and the colonial enterprises of the French, Spanish or Portuguese, and later on the Americans. In the context of Norway, we also recognise the more complex imperial histories involving both the Norwegian state’s approach to the indigenous Sami populations, and Norway’s union first with Denmark, then Sweden, leaving Norway an independent state only from 1905. Yet, there is still reason to expand on this plurality of empires – historically and geographically.

References to Joseph Conrad’s ‘The Heart of Darkness’ are frequent, especially in the literary quarters of ‘post-colonial’ theory, including Edward Said. Conrad’s novel was published in 1899, and was at the time a quite radical critique of imperial practice, drawing on Conrad’s own experience as a sailor in the British empire. The book later received criticism for dehumanizing descriptions of Africans in what was then the Belgian colonised Congo, by Nigerian author Chinua Achebe, and not without reason.

However, my point with drawing attention to Conrad’s ‘Heart of Darkness’ is to underscore the need for scrutiny of the roles of empires in the plural – where Conrad serves as a useful example. He was born in Poland, at a time when the country did not exist on the European map, but rather had been divided into three and absorbed among other by Russia. He was born into a family where both his mother and father were active in the Polish underground as anti-tsarists activists. His parents died early and he left Poland at 16.

How is this relevant for a discussion on decolonising the academy taking place in Norway? First, in recognizing the many different empires and colonisations which exist historically and geographically. Notably in relation to Norway’s neighbour, Russia and its region. Second, to critically assess the role of language in knowledge production and communication, also in relation to colonisation. For, how much do we know, today in Norway, of knowledge production and academic exchange, in Russia, or in the larger region which was under heavy influence of the Soviet Union until less than 30 years ago? And if we are not well-versed here – why not? And by extension; which imperialisms come to matter in efforts to decolonise the academy, and which perhaps do not?

Which international migration flows are studied, and why these?

In migration studies more broadly, questions of power of definition and of colonial legacies, frequently come to the fore. Not least in relation to race. But also in the ways in which colonial legacies matter for migration management policies around the world. Despite the fact that global interconnections and interdependencies are obvious in migration studies, there are unresolved issues and dilemmas insufficiently reflected upon. For instance, in relation to who is an ‘insider’ or an ‘outsider’ and how researcher positionality impacts findings. It continues to be a challenge that rigid boundaries between “the majority” and “minorities” are taken at face value, obscuring the multiple ways in which power-hierarchies matter in processes of knowledge production and knowledge communication. These are fundamental questions, where matters of power are at the core.

For justice, for knowledge

Finally, from the perspective of research being conducted at an institute such as the Peace Research Institute Oslo (PRIO), what might the practical implications of reflecting on decolonising the academy be? As a start, recognising that there can be no peace without justice, and that this, arguably, ought to also involve equitable processes of knowledge production. Here, the obvious backdrop is the extreme imbalance in wealth, whereby academics based in Norway, for all the challenges which exist here, with temporary contracts, among other, are super-privileged in the global context. How then to adopt academic everyday practices which can in anyway contribute to processes of knowledge production that are more equal?

One place to look, is to the ways in which we engage in research collaboration with international partners. Who do we work with and how? Whatever the structural constraints which are there – in the short term – are there things which can be done in order to make such research collaboration practices more equal? And within this – how do we productively engage with conceptions of the world which are – or appear to be – fundamentally different to our own? A first basic step is to recognise that we need to ask ourselves these questions, and to invest time and energy in doing so.