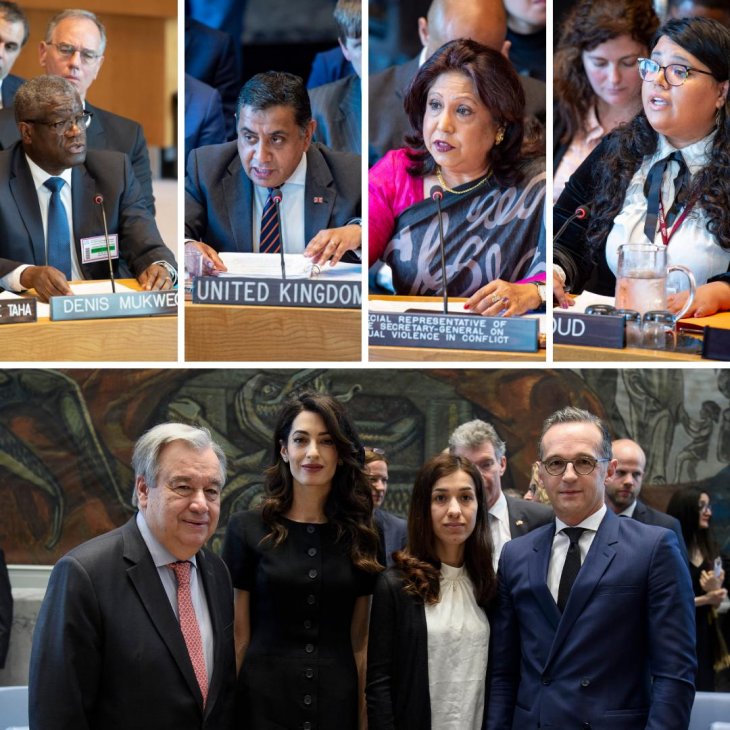 Since 2012, April has been the traditional month of the United Nations Security Council (UNSC) open debate to discuss the annual Secretary-General’s report on Conflict-Related Sexual Violence. And while for the Women, Peace and Security (WPS) community it is always a major event on the calendar, with the prospect of a US veto of a new resolution, the debate this year suddenly became a must-watch event in New York and around the world.

The resolution sought to advocate a “survivor-centered approach” to prevent and respond to sexual violence in conflict.

We were fortunate to be across the road at a workshop discussing the priorities for the 20th anniversary of the WPS agenda on the UN Security Council (UNSC) in 2020. The lead up to the ninth resolution on WPS – in blue at the time of the meeting – was much debated at the ‘Chatham House’ discussion among contributors to The Oxford Handbook on Women Peace and Security, UN permanent member representatives, civil society organizations and UN officials. Crucially, this was the year that the Security Council open debate marked the 10th anniversary of the creation of the UN Secretary-General’s Office of the Special Representative on Conflict-Related Sexual Violence. 2019 is a momentous year to reflect on what has been achieved in the last ten years since the creation of this UNSC mandated Office on CRSV, and to consider what is still required to protect individuals from CRSV, to prosecute individuals who commit CRSV, and restore peace and justice to communities affected by the consequences of CRSV.

The achievement of a resolution on conflict-related sexual violence (CRSV) was thus symbolically and operationally important to donors and the UN itself. There is a series of events organized in 2019 to promote international attention on CRSV, including one this week in Oslo to discuss humanitarian responses to, and prevention of, sexual and gender-based violence. The resolution provides important normative momentum for agendas like CRSV.

In humanitarian situations, it important to remember that the delivery of sexual and reproductive health and rights belongs with the actors on the ground providing services to survivors as much as with the Security Council and its resolutions.

The resolution sought to advocate a “survivor-centered approach” to prevent and respond to sexual violence in conflict. The original resolution also sought to establish a formal mechanism, i.e. a Working Group (of UNSC members) on sexual violence in conflict, adopt language on referral of cases to the International Criminal Court (ICC), and recognise LGBTI communities as a vulnerable group when it comes to CRSV.  However, the German Presidency removed all these inclusions, as well as specific language on sexual health and reproductive services for victims, in order to secure the adoption of the Resolution 2467. In light of the angst that followed this decision, and the process that led to the UNSCR 2467, it is timely to consider the promise and the pitfalls of the UN approach to preventing conflict-related sexual violence. Despite the obvious limitations of the new resolution, we argue that not all is lost specific to CRSV nor the broader WPS agenda. We suggest three considerations to move us forward.

Now that there is a new resolution, despite all its significant flaws and compromises, we should focus on what it delivers.

First, Resolution 2467 is a compromise but failure may have been worse. In a situation where Russia and China are using divisions between the US, UK and France to their advantage across a range of issues it must be asked, once the resolution was in blue, what political damage might have resulted from demonstrable failure to adopt a resolution on CRSV in 2019? Many were arguing in March that the political environment was not right for a new resolution. The pushback toward language on sexual and reproductive rights was foreseen due to the position of the Trump administration. We cannot speculate on why Germany still pursued this resolution once the risk of pushback was presented. However, once the resolution on survivor-centered responses to sexual violence in conflict was on the table, how would the adoption of no resolution have been interpreted? Now that there is a new resolution, despite all its significant flaws and compromises, we should focus on what it delivers – the promotion of a survivor-centered approach, the imposition of sanctions, the promise of justice and accountability, provision of reparations for victims of sexual violence in conflict, and recognition of children born of rape.

Second, the Security Council does not have the final say on implementation of the WPS agenda or women’s rights. While UNSC resolutions can enable action and force, they still experience contestation even after adoption. As True and Wiener argue in International Affairs, some powerful states contest the scope of WPS and its very relevance to international peace and security, and therefore to the UNSC agenda. This goes for the resolutions we support and the ones we think could have been better.

In humanitarian situations, it important to remember that the delivery of sexual and reproductive health and rights belongs with the actors on the ground providing services to survivors as much as with the Security Council and its resolutions. What is available to survivors and the organizations that respond to CRSV is provided, funded and coordinated by OHCHA, UNFPA, and local and international health provider civil society organizations. UNFPA and OCHA are empowered by the UN General Assembly and guided by the decisions of the Human Rights Council, the medical position on the World Health Organization SRHR, and the findings of the UN CEDAW Committee. Those who are funded by the US government are certainly under threat but in the place of this reneged funding, countries like the Netherlands, Canada, Belgium, UK, Japan, and Australia have stepped up, as well as private actors like the Bill and Melinda Gates and Buffet Foundations. Let’s turn our attention to the institutions and actors delivering survivor-focused care and protection, hearing and responding to survivors’ needs.

The compromise language is far from ideal. But there remain key commitments in this resolution that support SRHR and the practices of the UN organizations that respond to CRSV survivors.

Third, with respect to the excluded specific language on Sexual and Reproductive Health Rights (SRHR) in the 9th WPS Resolution – advocates must not concede any ground to the Security Council that UNSCR 2467 is a walk back on the SRHR agenda. Exclusion from one resolution does not walk back its inclusion in three previous resolutions –Resolutions 1889, 2106, and 2122- all of which were referred to in the Preamble of UNSCR 2467.

The compromise language is far from ideal. But there remain key commitments in this resolution that support SRHR and the practices of the UN organizations that respond to CRSV survivors. The preamble to UNSCR 2467 goes on to recognise:

“the need for survivors of sexual violence to receive non-discriminatory access to services such as medical and psychosocial care to the fullest extent practicable and need to be free from torture and cruel, inhumane or degrading treatment, and that violations of the obligations on the treatment of victims can amount to serious violations of international law.”

Operative Paragraph 16 (a) ensures that survivors “receive the care required by their specific needs and without any discrimination” and Paragraph 18 recognizes that “women and girls who become pregnant as a result of sexual violence in armed conflict, including those who choose to become mothers, may have different and specific needs.” These are direct references to European Court of Justice case law on abortion where case decisions have said that failure to provide access in particular circumstances is a violation of those terms. Taken together, these passages in UNSCR 2467 affirm a continuing obligation for states to provide SRHR to survivors to avoid cruel, inhuman, and degrading treatment.

As feminist activists at the Tunis Gender Equality forum in April stated: “We are jolted once again, and reminded that we have to stand firm in our fight for women’s equal rights.”

The ‘constructive ambiguity’ in the language may have been part of the negotiating dynamics behind UNSCR 2467. We can only surmise. The Resolution also references commitments in the UN Beijing Platform for Action (which the US failed to successfully contest at the CSW in March), and the CEDAW General Recommendation 30 on women in prevention, conflict and post-conflict situations, which specifically refers to women’s right to abortion, abortive services and post-abortive care by states parties and health care providers (paragraphs 52c, 64, 65a).

As feminist activists at the Tunis Gender Equality forum in April stated: “We are jolted once again, and reminded that we have to stand firm in our fight for women’s equal rights.” The withdrawal of US funding, as much as the exclusion of the language from the resolution, represents a threat to all agencies and institutions that is very real. However, support and advocacy for WPS and SRHR extends well beyond one country and the institution of the UN Security Council. Change happens at all levels and across many institutions. There are multiple dialogues and local sites of practice to engage to ensure women’s relief and recovery, participation and protection in international peace and security. Resolutions matter a great deal; so does the implementation of survivor-centered responses to gendered violence and insecurity on the ground. Resolution 2467 affirmed this – let’s focus on that.