Around the globe, mass nonviolent protests are demanding that national leaders step down. Evo Morales, Bolivia’s three-term leftist president, is the latest casualty of mass demonstrations, after being abandoned by the military. Beyond Bolivia, people are rising up against their governments in places as varied as Chile, Lebanon, Ecuador, Argentina, Hong Kong, Iraq and Britain. This follows remarkable protests in Sudan and Algeria in the spring, in which protest movements effectively toppled entrenched dictators, and in Puerto Rico, where a mass movement deposed an unpopular governor. Beyond Puerto Rico, the United States has also hosted a steady stream of protest since January 2017 against the Trump administration and its policies.

We may be in the midst of the largest wave of nonviolent mass movements in world history. Social media has made mass protests easier to organize — but, perhaps paradoxically, harder to resolve. As these movements escalate more rapidly around the world, some common challenges may make it harder for them to succeed beyond winning short-term concessions. That’s especially true when they are leaderless or unorganized. Let’s look at why. 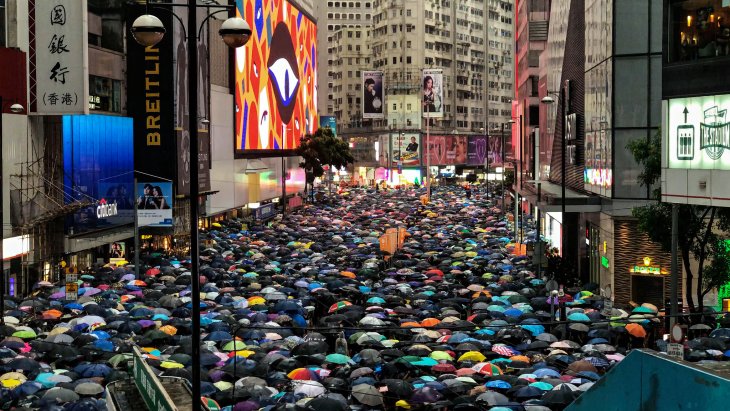 While most of these are peaceful, nonviolent protests, some have “violent flanks.” Some research suggests that intermittent street fighting and violent distractions — like molotov cocktails or rock-throwing — can make such movements harder for people and the government to ignore, keeping pressure on elites to resolve the crisis, so long as the movement as a whole is well-organized.

But other research suggests that violent flanks make movements less likely to succeed both in the short and longer term because they tend to repel would-be participants and supporters or make opponents less likely to accede to protester demands. Many movements win major gains and influence attitudes and policy for years without violence; they do so by organizing carefully and planning for a long-term struggle. Other movements have succeeded despite violent flanks by keeping large numbers involved, diverting attention from those using violence.

The larger a movement becomes and the longer it struggles against the government, the more likely it is that violent flanks will emerge. And when state security forces show up in riot gear, or when plainclothes provocateurs disrupt peaceful demonstrations, it’s hard for even well-disciplined campaigns to suppress violence.

2. Technology and social media can strengthen either side.

Social media lets many people learn from one another — spreading information and inspiration more easily than in the past. Social media networks do often get people involved in protests quickly. And recent research suggests that the Internet and social media make protests more likely to grow once launched.

But social media can also hamper longer-term movements for change. That’s because it can gather people quickly — but without the foundation for sustained engagement, which requires opportunities to plan, train, organize, prepare and hammer out strategy.

What’s more, governments use Internet tools to undermine movements. As Seva Gunitsky has detailed here at TMC, social media can help spread misinformation. And digital tools and platforms are highly vulnerable to surveillance, infiltration and other movement risks.

3. Dictators are mobilizing their own counterdemonstrations.

According to one study, for every seventh anti-regime protest, authoritarian governments organize a counterprotest. By bringing their own supporters into the streets, dictators signal popularity and political strength. Counterprotests can also allow dictators to frame anti-regime protests not as a battle between the people and the regime, but as a source of domestic disorder.

Counterprotests often provoke violence or push opposition protesters out of the streets. In Hong Kong, pro-democracy protesters have clashed with pro-Beijing demonstrators. In Lebanon, pro-government protesters are filling streets, clashing with the anti-regime movement. Movements that persistently outnumber counterprotests — and maintain discipline in the face of them — can reinforce peaceful pathways forward. But movements without a plan to contain counterprotests risk losing the public fight for legitimacy.

4. Leaderless movements struggle to negotiate from the streets.

Today’s movements tend to embrace leaderless resistance. While that has tactical advantages and ideological appeal, there’s a price. Movements usually benefit from some form of collective leadership, whether called councils, cooperatives or something else. Leadership structures can help movements articulate their demands, negotiate and balance power within a coalition. Most charismatic leaders, including Martin Luther King Jr. and Gandhi, had a “deep bench” of potential successors and were held to account by other movement leaders, keeping most of their actions consistent with what the movement base wanted.

Leaderless movements — which don’t organize the relationships among a movement’s different groups — risk allowing centralized groups with tighter discipline to outmaneuver the more inclusive majority. In Egypt, the Muslim Brotherhood was the best-organized political coalition after the Jan. 25, 2011, revolution unseated Hosni Mubarak; it won the election that followed. But a counterrevolutionary coup by the better-organized military and nationalists unseated the new leader, Mohamed Morsi.

Successful nonviolent movements involve much more than just street protest. They require a diverse, ever-growing constituency, a plan, and the ability to redistribute power when the fight is won. That’s hard to do without leadership and organization — and without the nonviolent discipline and creative tactics that well-coordinated movements can offer.

Zoe Marks (@z_marks) is lecturer of public policy and core faculty at the Belfer Center and the Carr Center for Human Rights Policy, Harvard Kennedy School.

Christopher Wiley Shay (@ChrisWileyShay) is a predoctoral fellow at the Carr Center for Human Rights Policy at Harvard Kennedy School.

Tore Wig (@torewig) is an associate professor of political science at the University of Oslo and a visiting scholar at the Center for European Studies at Harvard University.

This piece originally appeared on the Washington Post Monkey Cage. Read it by clicking here.