How difficult should it be to obtain citizenship in Scandinavia? And are there differences in the attitudes of majority populations, immigrants, and their descendants, when it comes to this question? The first Scandinavian survey to look at these questions shows astonishingly small differences across countries and groups, despite polarization of both politics and debate in the region. 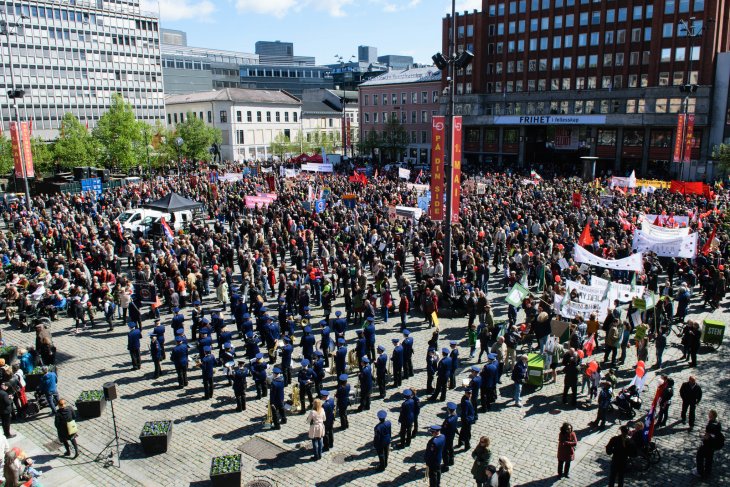 In 2018, together with our colleagues in the other Scandinavian countries, we undertook a representative survey in Denmark, Sweden, and Norway. Young people from ages 20 to 36 were interviewed – just over 7500 in total. Individuals from the majority populations, descendants of immigrants from Iraq, Pakistan, Poland, Somalia, Turkey, and Vietnam, were included. Immigrants from Iraq and Somalia also participated in the survey in all three countries, while immigrants from Pakistan, Poland and Turkey were included, in addition, in the Norwegian sample. All respondents were asked what they considered reasonable requirements for citizenship, what they thought of the existing rules in their respective countries, and to what extent they felt they were recognized as members of the national community.

Citizenship is the last stop on the way to formal membership in a new homeland. Before this, immigrants with legal status already enjoy many rights. New members of Scandinavian societies have access to some civil and social rights, from day one in the country. Still, citizenship is regarded as important and attractive, especially among those who come from countries with greater legal, economic, and political uncertainty. Citizenship in Scandinavia protects them from deportation, in principle at least. It bestows help overseas, grants the right to vote in parliamentary elections – and not least, gives access to a Scandinavian passport, with all the rights to travel freely and work in the entire EU region.

Citizenship is the last stop on the way to formal membership in a new homeland.

In the last few years there has been a trend to implement stricter requirements for citizenship in many European countries, such as knowledge tests (language, history, and society), proof of self-sufficiency, and longer waiting times.

Among researchers, these stricter requirements are often interpreted from either a control or an integration perspective: Recent increases in immigration have made authorities keen on finding legal ways to control access to citizenship. On the other hand, concerns over integration have raised the bar for competence in language and knowledge about society, and those who are permanent residents and seek citizenship are required to meet this higher bar in order to become full members.
Regardless of how one interprets the politics, these laws create indisputably higher barriers. There has been an (implicit) assumption among researchers that the stricter requirements are not in immigrants’ interest, but no empirical research has been done. This new survey is the first to investigate these issues empirically.

The three Scandinavian countries are interesting to compare because they cover the entire scale when it comes to citizenship requirements. Denmark is one of the strictest countries in Europe when it comes to citizenship. Sweden is on the liberal outer edge, while Norway – as is often the case with immigration and integration policies – finds itself somewhere in the middle.

We began our study with the assumption that these marked political differences would be mirrored in the immigrant groups and descendants’ attitudes in the three countries – that immigrants and descendants in Denmark would be more critical of the country’s rules, than corresponding groups would be to Swedish policies in Sweden, for example. We also thought the majority populations would want stricter requirements than the minorities would, especially in Denmark. The results did not meet our expectations though, and in many ways were very surprising.

This survey was part of a bigger comparative project on citizenship, integration and belonging, financed by the Research Council of Norway’s Welfare, labour and migration (VAM)-program, and the Integration section, the Norwegian Ministry of Education.

Overall the survey does not show big differences between the three countries, and when it comes to attitudes toward how the rules are and should be, there are barely differences between the three groups (majority, immigrants, and descendants). The prevailing attitude is that it is legitimate to set requirements for new members of society who become citizens – the majority across groups believe these requirements should include five years of residence, a simple language and society test, an oath, and being part of the work force. At the same time, they think it should be legal to keep one’s original citizenship when naturalizing. In other words, there should be clear requirements to become a full member of a Scandinavian society, but these should be reasonable and possible to meet. The results paint a picture of consensus on what “reasonable” means – a framework that lies somewhere between the extremes represented by Denmark and Sweden.

Other institutions, like the education system, labor market, and health care system are probably more important as a basis for attitudes toward membership in society than citizenship.

How should we interpret these findings? The alignment in attitudes across our survey respondents is a pointer to the fact that life in Scandinavia is not so different across the three countries, despite the respective states’ different policies on immigration. In fact, other institutions, like the education system, labor market, and health care system are probably more important as a basis for attitudes toward membership in society than citizenship.

The survey does not tell us anything about emphasis placed on different institutions’ importance for feelings of membership, acceptance, and belonging. But we do see indications of experiences of both discrimination and of lower levels of trust among minority groups.

The consensus on requirements, nevertheless, suggests that the citizenship institution continues to matter as a framework for togetherness. The survey also indicates that minority members of society are reflected actors, alongside majority society members, when it comes to guarding the last ticket into society – and what should be demanded, in order to ensure the functioning of an increasingly diverse society.

If you would like to read the full report it is available on the PRIO website. Find it by clicking here.

Translated from Norwegian by Indigo Trigg-Hauger. This blog post is based on an op-ed published in Aftenposten and Dagens Nyheter, and with additions in Berlingske Tidende, on 4 December 2019.