Nationalism and the political salience of national identities are on the rise in contemporary Europe and beyond. This rise is often associated with populist movements. These include populist political parties, several in position across Europe today, whose politics are characterized by isolationism and anti-immigration stances, and right-wing populist groups, characterized by xenophobia, sometimes overt racism and anti-Semitism. 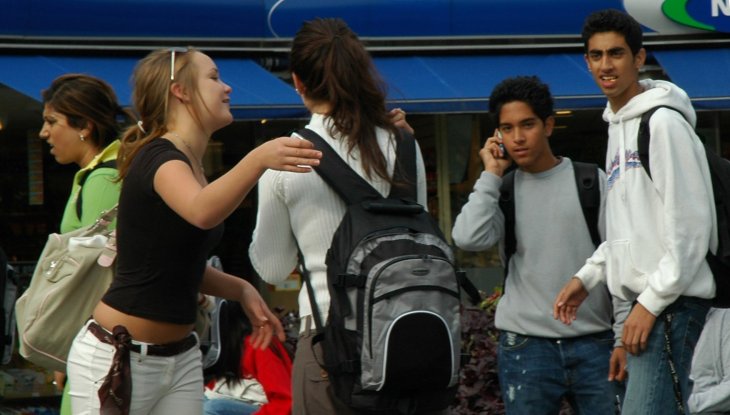 A group of youths in Oslo, Norway. PHOTO: Wikimedia Commons

Meanwhile, mobilizations of the nation need not only be analysed as causally connected with populism. In fact, there is a critical need to engage with the national from contrasting vantage points, in order to unravel the roles which the nation as a shared fate community continues to play in today’s globalised world. In this blog post we explore how nationhood in contemporary Europe is being shaped, affirmed and changed, foregrounding the roles of what is often assumed to be troublesome migration-related diversity.

Whom is one willing to think of as a member of the nation?

Feeling reasonably at home in your neighbourhood, on the football pitch, in your local shop, at work or at school reflects a sense of belonging. Feeling at home, is something which is experienced – or not – in everyday life. Membership of a ’nation’ is about one’s own sense of belonging, but also about whom one is willing to think of as being a member of that same national community. Relatedly, it is also about the experience of not being seen as a legitimate and equal member of a national community. This then boils down to inclusion and exclusion in the nation. Conversely, where inclusion and exclusion are practised and experienced, the boundaries of the nation are shaped, affirmed and changed. Through these processes of shaping, affirming and changing the boundaries of the nation, our understanding of the nation itself, and its key traits, also changes.

A person’s skin colour, name and clothing all contribute to forming a first impression of another human being: how you see other people, how other people see you, and how you think that other people see you. In our research, conducted among students at upper-secondary schools in Norway, we found that skin colour was often experienced as a boundary, determining whether or not a person was perceived to be Norwegian. This experience was shared in particular among students who were not white. But, this boundary is not experienced as fixed and absolute.

Regardless of family backgrounds, students understanding of Norwegianness was based on continuous interaction between their experiences of what Norwegianness is and what they think Norwegianness ought to be. The students reflected on their own first impressions, where skin colour might certainly be a factor, but they did not see this as acceptable. The vast majority of students did not think that skin colour is a legitimate boundary for delimiting Norwegianness today. They did recognize, however, that skin colour often is a factor in drawing such boundaries, in particular in the public sphere, where the media and politicians play important roles. Many also reflected on the fact that, whatever their own skin colour, their immediate reactions – their first impressions – of another person, often assumed a connection between skin colour and Norwegianness. Yet, this was a connection which was questioned, based on the experienced reality that today many Norwegians are in fact not white.

Who is a national?

It is important to emphasize that among the students in our study – as is the case in Norwegian schools – on the basis of family background it is not straightforward to define clearly who is ‘a national’ and who is not. There are students who have two parents who were born in the same place where the students themselves have grown up; students with parents from different parts of Norway; students who have a mother born in a Norwegian village and a father from Nairobi; students with grandparents born in three different countries, who came to Norway recently or 50 years ago; and students adopted as infants, who are not white, but have two Norwegian-born parents. Whether we examine students’ family histories and skin colour, or what they say about Norwegianness, we find what we call ‘plural Norwegianness’;  nationhood which encompasses difference, including difference pertaining to race and individual’s birthplaces.

In our research we investigated which effects increased ethnic and religious diversity has on how a national community is experienced and understood. We did this through talking to students at upper-secondary schools, starting from the premise that these students are a natural part of the Norwegian society, and as such are in a position to legitimately provide insights into the question of what’s in a nation.

All too often, the basis for nationhood, for inclusion or exclusion in the nation, and the ways in which boundaries of the nation are interpreted and operationalized in studies, are not explicit. For instance, in survey research on the implications of migration-related diversity for the nation, who is entitled to have an opinion? When questions of the future of national culture are discussed, who has the legitimate right to express an opinion? Those who are citizens? Those who were born in the country in question? Those who have parents who were born there? Or, those – in the context of Norway and much of Europe – who are white, or otherwise racially or religiously defined? Any approach, with its ensuing choices and their implications, should be justified in relation to its scientific merits.

Whom you choose to ask about the nation will affect the answers you receive. We chose to listen to the voices of students at upper-secondary schools. We see that the national encompasses different narratives, where everyday experiences, ideals and stereotypes all have their places. The principles on which tomorrow’s adults’ base their evaluation of what should be the boundaries of membership of the nation are founded on equality, democracy and liberty. The school can serve as a place where the potential of a plural nation can be practised and experienced. The boundaries of membership in the nation can be affirmed, shaped and changed, and shared understandings of nationhood can be produced and reproduced in the classroom.

The nation, we argue, exists in the everyday lives, as well as the minds, hearts and imaginations of people. As such, the nation is an empirical phenomenon which merits further analytical attention. Whilst nationalism studies used to be pre-occupied with the historical origins of nations, attention is now turning to how nations are being negotiated in the context of globalization and of migration-related diversity.

Conversely, that migration-related diversity is somehow troublesome for the nation is a claim founded on a conviction that nations are somehow static and unchangeable. Yet, nations are not. Looking back, a couple of decades, a century perhaps, it is clear that nations are dynamic; they are affirmed, shaped and changed through ongoing negotiations. The fault lines of such negotiations might centre on the roles of religion, of gender equality, of economic inequality, or of race, ethnicity and language. Whatever the case, how difference is constructed is central.

Simultaneously, the existence of difference should not be underplayed, nor the fear which difference may produce. However, difference is not new, nor is the instrumental politicization of differences, perceived or real. In arguing for a plural conception of the nation, we do not downplay differences. Rather, we consider the many different differences which a nation encompasses. Furthermore, we question whether the difference that makes a difference in relation to how a nation is experienced necessarily is that of migration-related diversity. What then of class, of regional differences, of religion, of past immigration and emigration, and in the Norwegian context indeed of the Sami indigenous population and long-standing minorities, such as the Roma or Jews? Whether or not the population inhabiting Norway, Norwegian citizens, see themselves – and are seen by others – as ‘Norwegians’, is a dynamic question, which is negotiated individually and collectively over time. This is what we refer to as ‘negotiating the nation’.

Unravelling the nation as an academic response

Recognizing the salience of the shared fate in a future somehow territorially intertwined, more often than not a shared language, and dependence on the same political institutions for safety, is arguably an important future-oriented corrective. It encompasses the dynamic nature of nations, as these appear on the ground. This matters politically because it impacts on what visions of future society are being offered. Such visions draw on assumptions about difference, and about what can or cannot constitute national communities, in the plural, or not.

‘There is more nation beyond neo-nationalism. It is the duty of scholars to make it appear.’ writes political geographer Marco Antonsich. Throughout our research we find nation as something which is happening, which is co-produced, as an active site. The national is not, as such, more important than other identity markers: sometimes it is, other times not. Yet, the nation matters, politically and in everyday life. For this reason it is important for us as researchers to make the nation visible, as it appears in all its complexity, inconsistency and difference. But also in the sense of shared belonging, of co-responsibility for the society in which many of the grandchildren of today’s adults, are likely to be growing up together.

An academic response to the politicization of difference, to the rise in populist movements that instrumentally mobilize on xenophobia, should be to meticulously and scientifically, unravel the nation, as it appears beyond, beneath, and with varying emotional reactions to the national iterations of neo-nationalists. This is an academic endeavour in its own right, but it is also a societal commitment. Without it knowledge-based policymaking in increasingly diverse European societies will lack fundamental insights and tools that might enable constructive approaches to building shared national futures.