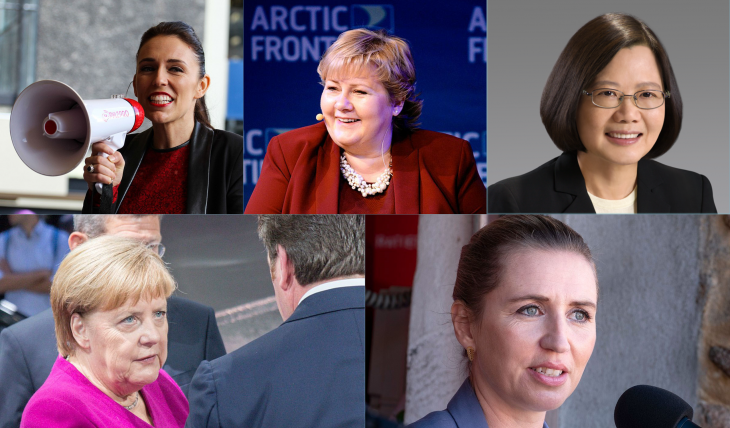 As countries consider how to recover from COVID-19 without a vaccine, technologies for testing and contact tracing are seen as crucial to enable us to return to work and school. But the one ingredient often missing in the strategy to contain (or eliminate) Coronavirus is effective leadership. Where leadership is evident globally, it is often coming from women leaders. It also comes from leadership that is gender-balanced, in that it exhibits both traditionally feminine qualities of empathy and care and traditionally masculine qualities of decisiveness and use of rational science.

The COVID-19 crisis is exposing the fragility of all our systems, our complex dependence upon one another, and the provision of healthcare as the most basic of human rights. As a number of commentators have observed however, the countries with some of the most successful responses to COVID-19 and with a lower morality rate (~ 1 percent versus global ~5 percent), such as Germany, New Zealand and Norway, appear to have one thing common: women leaders.

These leaders have adopted a human security approach to the crisis that goes beyond the either/or political debate focused on the health of the population versus the health of the economy. They highlight the role of individuals and families as well as attending to the needs of potentially vulnerable groups including the elderly, children, and healthcare workers. The prime minister of Norway, Erna Solberg, spoke to children directly, addressing their questions and concerns early on about COVID-19; while New Zealand prime minister, Jacinda Ardern hosted Q&A sessions on Facebook from home and led isolation parenting tips sessions with a child psychologist directed at parents’ concerns. Rather than engage in us-versus-them politics looking for a culprit to blame the crisis on, these women leaders have promoted solidarity and compassion among their citizens. German chancellor Angela Merkel asks citizens to think about how their behaviors affect their own parents or grandparents, emphasizing “these are not just abstract numbers in statistics, this is about people.” Ardern is even more familial with her citizens, encouraging everyone to ‘be kind to each other’ and to look out for your bubble – those small groups of people in your family and workplace that you can safely interact with.

while women constitute more than two-thirds of the healthcare workers around the world responding directly to the pandemic, they are in the minority of those charged with COVID-19 decision-making.

By contrast, other, often male, world leaders have used a harsher, more aggressive tone. Johnson, Macron, and Trump, for instance, have all likened the pandemic to a war that must be won and the virus to an enemy that must be defeated. Roopa Dhatt and and Ilona Kickbusch found that  “Trump used war analogies in thirteen of the nineteen statements he gave in March.” While President Duterte in the Philippines, in an extreme example, has ordered the police to shoot lockdown violators dead.

The COVID-19 plans in women-led countries are working because their leaders are behaving like true leaders, unlike others. They communicate clearly providing factual information, deferring to health and scientific expertise, and transparently manage public expectations. The four-level alert system created by the Ardern government in New Zealand at the outset of the crisis, for example, psychologically prepared people for the vigilance that would be needed as the country moved to one of the strictest lockdowns in the world. A model that, in the words of Uri Freedman writing in The Atlantic “couldn’t be more different from US president Trump’s ‘What will I do today?’ approach.”

For some time now, researchers have been noticing that women’s leadership and gender-inclusive governance are good for stability. Women’s participation contributes to the prevention and resolution of conflicts, while the lack of women’s participation undermines it. Gender-balanced representation in legislatures and corporate boards is associated with less corruption, better policy outcomes and higher investment returns in companies after the 2008 Global Financial Crisis. It is not surprising that now in a global health pandemic, when human lives are at stake, feminine leadership attributes might prove essential.

But hyper-masculinity, often associated with an aggressive and authoritative leadership, tends to be dominant in state and global leadership, which is also male-dominated. And while women, who may be more likely to embody feminine leadership attributes, constitute more than two-thirds of the healthcare workers around the world responding directly to the pandemic, they are in the minority of those charged with COVID-19 decision-making. At the first COVID-19 Australian parliamentary session, for example, according to research by Sonia Palmieri, women representatives spoke for just 40 minutes of four hours. Similar patterns are reflected around the world as men dominate the new decision-making groups established to manage the COVID-19 crisis. But, “women should not just be the babysitters” of the economy and society, rather they should be at the centre of efforts to recover from COVID-19 as UN Secretary-General António Gueterres argued on April 9th; and that effort starts with women as leaders, with equal representation and decision-making power.

We need to start addressing the leadership gaps both in the gendered styles of leadership and in the skewed gender imbalance in leadership globally. Twenty-five years ago, the 1995 UN Beijing Platform for Action recognised that caring and care work are a crucial part of our economies and societies, requiring governments “to measure and better understand the type, extent and distribution of unremunerated work, particularly work in caring for dependents.” Experience from the Ebola and HIV crises in developing countries shows that, when health systems fail, it is women who step in as unpaid home-based caregivers, often with devastating impacts on their own health. Today, amidst a global pandemic, it is vital that we recognise the importance of a care ethic in effective political and crisis leadership.

Guterres has called for a global ceasefire to contain the current spread of the disease, and for a ceasefire on the horrifying scourge of domestic violence during COVID-19. There’s a chance now to stop unnecessary war, violence and division as we focus on the common threat to all our security. COVID-19 is not a war we need to fight – it’s a global health crisis that will require local and global efforts to re-balance our leadership and gender divisions of power as well as our social, economic and environmental systems for the stability and survival of humanity. The pandemic is showing us that change is possible and that problems can be solved with good leadership. It is also revealing that the lack of gender-balanced and women’s leadership is a critical factor that is holding us back in addressing global challenges; not only COVID-19 but also climate change, increasing armed conflict and violence, massive displacement, and rising inequality.

Jacqui True is a PRIO Global Fellow, and the Director of the Monash Gender, Peace and Security Centre, Australia.

There are lots of women front-liners that are very brave and passionate about their roles. Salute to these women. Covid-19 really affects us all, especially in our economy. Thanks for sharing this positive news.