On 23rd March 2020 the United Nations Secretary General Antonio Guterres called for a global ceasefire to combat the coronavirus pandemic. Given the ambition of Colombia’s peace agreement and the strong support of the international community for its implementation, it is worth asking: how is the pandemic affecting the peace process? 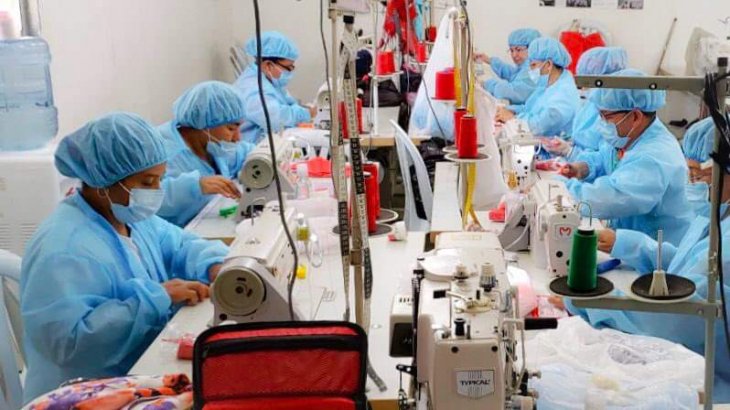 A cooperative of FARC-EP excombatants at the ETCR of Pondores, Guajira, make masks during the pandemic. Read more here. Photo used with permission.

Most noticeable progress has been around disarmament, demobilization and beginning the reintegration process (DRR); and setting up transitional justice institutions, mainly: Special Jurisdiction for Peace; Commission on Truth, Coexistence and Non Repetition; and the Special Unit for the Search for Person Deemed as Missing. Other transformational initiatives, such as post-conflict local development plans are underway. Amongst the most urgent matters is the systematic killing of former FARC combatants (195 killed, out of 13,000 demobilized). As well as social leaders (hundreds were killed since 2017), out of 4.500 whom are receiving some form of state´s protection from pertinent entities. These killings have remained steady ever since the beginning of the implementation, in spite of national efforts.

Whereas official hostilities with FARC ended, and the lay down of arms was successfully done in  2017, other illegal armed groups are still heavily engaged on rent seeking strategies (such as the Ejército de Liberación Nacional (ELN), dissidents of FARC-EP and EPL, and  former paramilitary groups).

Due to the pandemic the government announced a complete lock down up to April 26. Official cases remain (as of May 1) at 6,500, and 293 deaths have been registered. Rural territories do not have large concentrations of population. About 6.6 million live in post-conflict areas, out of which 35% are registered victims of armed conflict. However, these territories may be at particular risk from the pandemic due to their low level of access to public services, such as drinking water and health care.

In Colombia, a country with high levels of income inequality, the government has offered financial compensation to several million vulnerable people in order to cope with lock downs. Evidence of social unrest has been anecdotal so far, but there are reasons for concern.

How have conflict dynamics been affected?

It is still unclear how conflict dynamics will be affected in the medium term. This will be determined by national political developments, the socio-economic situation, unknown illicit markets’ evolution – which finance illegal armed groups – and the border situation with Venezuela, among other factors. The most noticeable development is a one-month ceasefire announced by the ELN in April.

As per non-governmental institute CERAC’s initial assessment, April’s ceasefire has been largely respected. The Catholic Church sent a request to the ELN for an extension of this ceasefire. The government’s Peace High Commissioner, and the United Nations Special Representative of the Secretary General in Colombia, amongst others, requested illegal armed groups to do similar announcements. Unfortunately, this ceasefire was not extended.

As of April 14th, the official number of homicides has decreased by 10% country wide, as compared with the same period of 2019. Anecdotal evidence shows that, following the lock down, homicide in urban areas has decreased dramatically (some cities reported between 50% and 90%). However, the killing of social leaders and former FARC combatants in rural areas have not followed the same path.

According to a recent non-governmental institute’s interview with local leaders (April 17th), several conflict related issues have emerged, including a continuation of violence, uncontrolled migration and potential economic impacts on peace´s process. The impact of the conflict on the environment is still unclear, beyond a significant reduction of urban pollution. So far, there is no evidence of an increase in an already complex and elusive post-conflict deforestation process.

How may all this affect peace process implementation?

The government has publicly reiterated its commitment to the implementation of the peace process. The UN Verification Mission in Colombia  believes that the pandemic will affect peace process implementation. A key factor will be the upcoming economic crisis, which could eventually reduce available funding, because more than $1 billion USD of the government’s resources are allocated to peace annually. This is a significant risk, because the role of international actors currently is, in financial terms, relatively modest on peace implementation (less than 10% of the total). Delays in implementation of the agreement – such as reincorporation of ex-combatants, transitional justice as well as the implementation of development plans (PDET, in Spanish) – may also pose a risk for the process.

It is worth noting that a rapid response to the special needs of ex-combatants at reincorporation places, and surrounding communities is underway (material, special brigades and COVID-19 related productive projects, such as textile production of masks and other bio medical material). This emergency response, if faster that during the beginning of the reintegration process, could increase confidence in the process.

It is still premature to anticipate all possible COVID-19 pandemic implications for peacebuilding in Colombia. At this stage, the pandemic remains both a significant risk and a source of new opportunities, such as potential ceasefires, for sustaining peace.