Protests in the United States, and around the world, have drawn attention to state-sponsored violence against black people in particular and people of color in general. As Black Lives Matter protests continue, the names of the many people, whose deaths sparked this collective outrage, ring out. Social media posts tag the names of George Floyd, Breonna Taylor, Tony McDade, and Ahmaud Arbery, among many others – individuals killed by state, and non-state, actors. 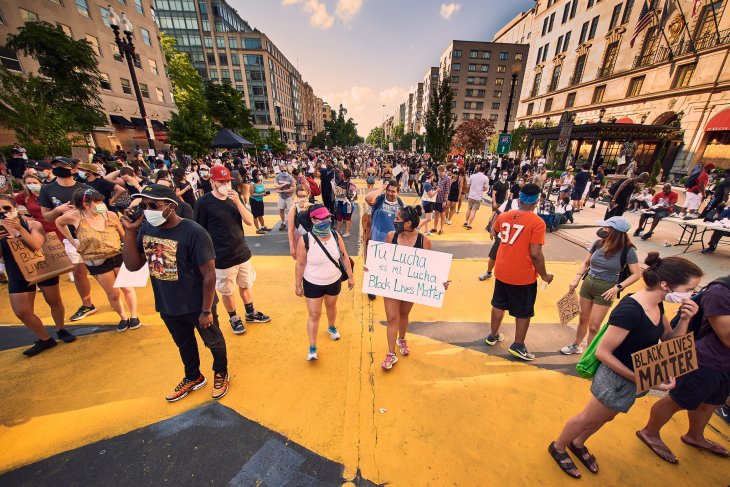 While important to identify these specific people, it is also important to note that the current protests are bigger than these individuals. The death of George Floyd at the hands of Minneapolis, Minnesota police has been seen as a catalyst for an unprecedented discussion of policing, reforming police, and defunding police in the United States. It is also, however, one of many instances of hesitation and indecision in the pursuit of justice for black people. These protests can be seen as a result of repressive state action – a vicious cycle of police use of force against citizens – but, they can also be understood as the result of what action has not been taken.

Violence against black people has been state-sanctioned in the United States for centuries, from slave patrols, to capital punishment, to the bombing of its own citizens.

The deaths of the individuals noted above, as well as countless others, echo a greater injustice in the United States: silence from the American government when black people experience violence. Today’s protests and chants of “Black Lives Matter” are only a small portion of a longer, and much larger, movement to end state-sanctioned and extra-legal violence against black people. A lengthy list of uprisings and protests, in addition to resistance through literature, music, and art, comprise this longer narrative. Violence against black people has been state-sanctioned in the United States for centuries, from slave patrols, to capital punishment, to the bombing of its own citizens.

State-sanctioned violence is not only committed by police, however. Violence is sanctioned in the silence of political leaders and elected officials. The murder of Ahmaud Arbery, a black man in Brunswick, Georgia, ignited furor when a video of white vigilantes chasing and then killing him became widespread on the internet. But, between the date of Arbery’s death, 23 February, 2020, and the arrest of his attackers on 7 May 2020, there was an effective silence on the part of his local government, as officials failed to make arrests in connection to the case, even with evidence pointing to wrong-doing.

Repeated bombings of black homes in Birmingham, Alabama in the 1940s and 1950s became a clear signal to the city’s black residents that local politicians were, in fact, white supremacists

Silence on Black Lives and Deaths

Silence is not simply that leaders say nothing, but also that they do nothing to endorse the basic rights of black people and people of color. Even among the voices of protest now shouting for justice, it is this silence that rings deafeningly. The failure of the American state to address, and to address swiftly, the murder of black Americans is repeated again and again throughout history. Violence against black people did not end with the Civil Rights Movement, and it is not exclusively executed through the state itself. Murder by police is one way in which the state sanctions violence, but its silence does so as well.

Silence is also not indifference. When local and state governments are unable to enforce social norms and boundaries, when those boundaries come into conflict with the language of the United States Constitution, violence becomes a weapon to coerce black people, and other minority groups, into line. My own research contends that the government silence which allows terror to reign is the equivalent of complicity, and it does not go unnoticed by those who are its targets.

Black families moved into white neighborhoods, violence ensued, and that violence did the work that white city leaders legally could not. It coerced black families to leave.

Extending the Reach of the State through Violence

In the mid-20th century, as black home-owners challenged residential segregation in the courts, American cities became legally unable to enact residential zoning policies – the practice of designating certain areas as only open to members of one racial group. In this context, black families moved into white neighborhoods, violence ensued, and that violence did the work that white city leaders legally could not. It coerced black families to leave. The prevalence of extra-legal violence has historically been a tool of social policing and enforcement, essentially an extension of state power.

My research on racially-targeted violence has found that the repeated bombings of black homes in Birmingham, Alabama in the 1940s and 1950s became a clear signal to the city’s black residents that local politicians were, in fact, white supremacists. The city’s failure to protect its citizens changed their strategy for resistance. Knowing that they would not be protected by the police, and that they were unable to hold elected officials accountable, black people in Birmingham adopted new strategies – a repertoire of collective action that drew on churches and civic organizations – to defend their own communities. Thus, state silence prompted political action in ways that circumvented institutional channels that were perceived as unresponsive – not unlike the protests that continue to emerge today.

Most recently, we see a hesitancy to confront violence against black people on the floor of the United States Senate. At their peak in the 1890s, lynchings were a pervasive form of extra-legal punishment wielded overwhelmingly against black people, and with substantial implications for black communities, including the loss of economic productivity. Though other steps have been taken to account for these injustices, no federal legislation was ever passed to prevent the practice.

No federal legislation was ever passed to prevent the practice [of lynchings].

Today, this continues, as an anti-lynching law is debated in the Senate. The bill, while regarded by many to be largely symbolic, is an effort to pass legislation formally outlawing the practice of lynching. The current failure of the Senate to pass the pending legislation – The Emmett Till Anti-Lynching Bill – is another example of silence on the part of the American state. What becomes clear, is that even symbolic gestures that codify the value of black people in the United States are a difficult task. Indeed, outlawing the practice of lynching is debatable, because violence such as this has historically been an extension of the American state.

The recent succession of publicly prominent, racist violence against black people underscores institutionalized white supremacy in the United States, though the country is not alone in this characteristic. The government has failed to protect black people, and indeed now, it endows white Americans with the ability to police and punish black people, as seen with the murder of Ahmaud Arbery. African-Americans have endured violence for acts that white people in the United States take for granted: living in a neighborhood of choice, marrying a partner of choice, moving in public spaces as an autonomous person.

The on-going protests across the United States are remarkable in their size and duration, but they are not only demanding justice for one man.

Glynn County, Georgia was silent for over two months over the death of Ahmaud Arbery. The City of Minneapolis hesitated several days before charging four officers with the murder of George Floyd. The City of Louisville, Kentucky remains effectively silent in response to the death of Breonna Taylor. American institutions have a clear history of faltering with regards to violence toward black citizens. These recent deaths are further indication of this. The on-going protests across the United States are remarkable in their size and duration, but they are not only demanding justice for one man. They are a call for Americans to recognize the ways that the American government – federal, state, and local – continues to sanction violence against black people and in doing so denies the humanity of black lives.

Kiela Crabtree is a PhD. candidate in the Department of Political Science at the University of Michigan and formerly a visiting researcher at PRIO. Her research considers the political consequences of racially-targeted violence in the United States. (Twitter: @kielacrabtree)