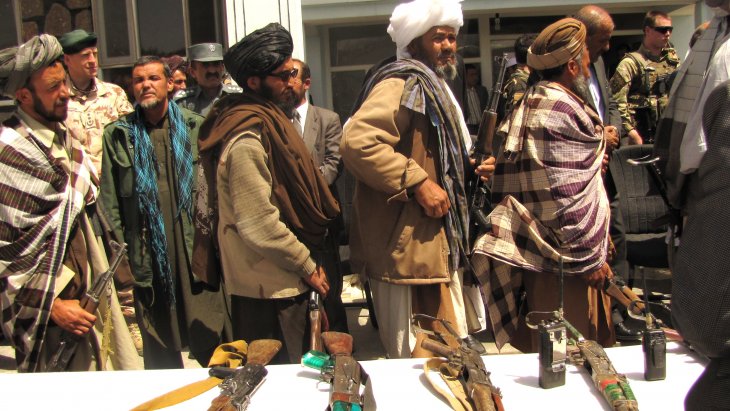 2012: Former Taliban fighters line up to handover their Rifles to the Government of the Islamic Republic of Afghanistan during a reintegration ceremony at the provincial governor’s compound. Photo: Department of Defense Lt. j. g. Joe Painter CC BY

An absolutely key reason for the Taliban’s victory is the agreement dating from February 2020, whereby the United States committed itself to the withdrawal of all international forces in return for a guarantee from the Taliban that the country would not become a base for new terror attacks. This agreement, and the diplomatic process that brought it into existence, gave the Taliban a completely new legitimacy, both in Afghanistan and internationally.

The Taliban want diplomatic engagement. A window of opportunity is open now, but it can close quickly.

The Taliban victory also came as a surprise to the organization’s leadership. The Taliban have not clarified how they will govern the country or what kinds of policies they will pursue. These matters are being determined now through internal negotiations and external dialogue. The Taliban have begged for the embassies to remain, but Western countries have nonetheless decided to evacuate. Closing these embassies restricts influence that Western countries have on what is happening right now, and it sends a clear message that one cannot take their future presence for granted. Other countries, with different interests and values, are not evacuating their embassies.

There is no reason to be naïve about the kind of Afghanistan we will get under the Taliban. The new government structure will be subordinate to religious authority. The implementation of Islamic law and order will be the central concern. The last time the Taliban were in control, they displayed limited interest in the provision of welfare services such as healthcare and education. The situation for women, for minorities, for the media, and for civil society will become much more constrained.

At the same time, the Taliban have surprised us since taking over Kabul. They have gone to considerable lengths to prevent attacks on the civilian population. They have asked the media to continue reporting. They have cooperated with foreign forces so that the evacuation of both foreigners and Afghans from Kabul Airport can proceed smoothly. And they have declared that women and minorities will be involved in running the country.

The Taliban are also concerned about international recognition. The last time they held power, from 1996 to 2001, they were shunned by the international community.

Many people are making comparisons with 1996, when the Taliban also similarly bold declarations, but over time evolved into an extremely oppressive regime. At that time, as now, there was little visible diplomatic engagement. But then, in contrast to the situation today, there was no international interest in Afghanistan. The Taliban were insecure, having originally set out to act as a transitional solution to end the all-out civil war in the country and hand power over to others. And they inherited a state structure that lay in ruins. Today, they are taking over a reasonably competent government bureaucracy.

The Taliban have made it clear that they want Western financial support. Afghanistan is a poor country, and without international aid, its government bureaucracy will collapse rapidly. The consequences for most Afghans will be severe. But the government bureaucracy is also starved of resources. Salaries have not been paid and corruption escalated as the government neared the precipice. Accordingly, the system will crumble quickly. The Taliban know this, and this is a major reason why they want international aid to continue.

This dialogue is important, and it will be challenging.

With the United States and its allies having withdrawn their forces, the Taliban’s interest in continued aid and international recognition is what remains. But their interest in these matters also provides a platform for talking about other things, not least what other countries expect of a Taliban regime in the future. This dialogue is important, and it will be challenging.

Ideologically, the Taliban are miles away from liberal democracy. The dialogue must be robust enough to allow clear demands to be made without causing the process to collapse. This requires an understanding of the ideological and religious landscape that the Taliban come from, of their values, references and language. Of course this does not mean acceptance of the Taliban’s world-view. On the contrary, such an understanding is a prerequisite for disagreement to be possible.

Norway has engaged in dialogue with the Taliban over a long period. The government-mandated Norwegian Afghanistan Commission (of which the author was a member) documented that the dialogue dated back to 2007. In summer 2019, peace negotiations between the Taliban and the United States were set to be held in Oslo, but the plans were short-circuited when President Donald Trump sought to lure the parties to meet face-to-face at Camp David. Norway has built knowledge about, and has an established relationship with, the Taliban. This gives Norway a good basis to play a constructive role in Afghanistan’s current critical transitional phase.

When the Taliban held power in the 1990s, they became isolated. Their policies in many areas were too extreme, but the isolation did nothing to make them more moderate. The gradually closer relationship between the Taliban and al-Qaeda in the second half of the 1990s must also be understood in light of this isolation.

And after over 40 years of war, there are good reasons to ask whether new rounds of armed struggle are what Afghanistan needs.

The Taliban have seized power over the past couple of months with surprising ease. In particular this was true of the final phase, in which most cities were taken following negotiations. This allowed the avoidance of prolonged fighting, which would have had huge consequences for the civilian population. Over the past three years, Afghanistan has been home to the world’s most deadly conflict. A large part of the population lives below the poverty line. The Covid-19 epidemic has only worsened the situation.

At the same time, we see those who want to continue the fighting against the Taliban. In the Panjshir valley north of Kabul, some elements of the historic anti-Taliban Northern Alliance have gathered. They promise to continue the fight against the Taliban and are asking for international support. Vice-president Amrullah Saleh has appointed himself president, citing the Afghan Constitution. One should always be cautious with making predictions about Afghanistan’s future, but right now, this resistance seems pretty unrealistic. And after over 40 years of war, there are good reasons to ask whether new rounds of armed struggle are what Afghanistan needs.

Right now, the Taliban are forming their new government. The narrative they are presenting is well polished and provides little doubt that the organization has learned much about international diplomacy. The important questions concern the types of government structures they will establish and what kinds of policies they will pursue in practice. The Taliban want diplomatic engagement. A window of opportunity is open now, but it can close quickly. Our experiences from the 1990s are terrifying. Let us hope that both Norway and other countries have learned their lesson.

[…] Let’s not add up the cost and turn our backs on Afghanistan, just because our arrogance has caused indignity, grief, and humiliation. The situation in Afghanistan is haunting. But, past suffering does not need to reoccur. We need to agree on some clear humanitarian priorities to minimize insecurity, chaos, and displacement so that no more generations of Afghans are lost. We must also bear physical witness to any reneging on agreements by the Taliban.  To do so, the international community must retain presence in Afghanistan. […]