Women are often on the periphery of formal peace and political solutions with limited decision-making power.

We argue that the current COVID-19 crisis has spotlighted three critical elements affecting women’s participation which need to be tackled in the upcoming 20th anniversary of Resolution 1325, the first UN Security Council Resolution on Women, Peace and Security; a process itself under pressure. We consider strengthened policy-research exchange, such as the #Beyond13252020 cooperation and the FBA, PRIO and UN Women Research-Policy Dialogue, central in providing an impetus to move beyond existing challenges. 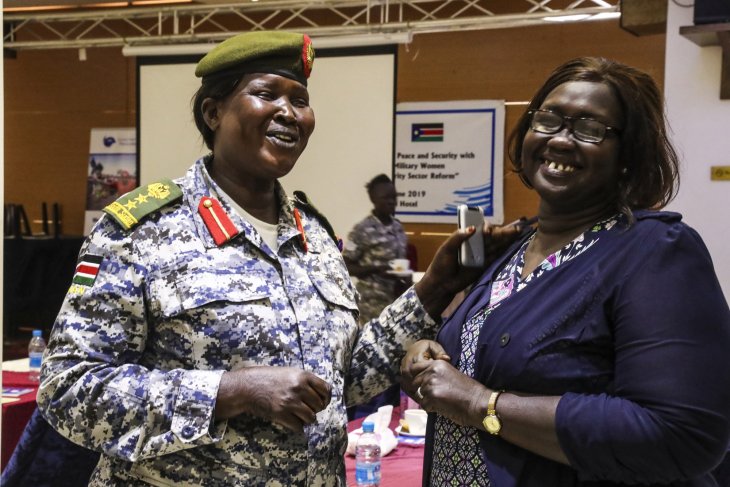 The rise of violence against women, particularly domestic violence is tragically already well documented as it emerged so quickly as quarantine measures were implemented. In his message on Gender Based Violence and COVID-19, the UN Secretary-General noted that “as economic and social pressures and fear have grown, we have seen a horrifying global surge in domestic violence” and issued a rallying call to end violence against women in their homes. From a research perspective, increases in intimate-partner violence have been found as a result of other aspects of crisis, such as exposure to violence related to war. More such studies are needed in order to learn how to best address this threat to women’s security and agency. Our current ability to design evidence-based programs remains limited as long as there is insufficient wide-scale and systematic data.

To effectively address, and prevent, violence against women, a robust public health infrastructure is necessary. In conflict settings, this is lacking. Women also often have limited access to critical health information and services that do exist, from primary care to sexual and reproductive health care. Health care is of course more than a tool to fight violence against women, it is a key enabler of their participation in public life. Those health care services that are available are severely strained by conflicts or as a result of weak governance. A recent study found that UN peacekeeping can assist in starting to address this by creating a secure environment. The result was decreased maternal mortality, increased rates of vaccination and increased rates of girls enrollment in school. Other studies have examined the role of support programs to survivors of sexual violence and how they assist with their reintegration in society. In order to improve our understanding of peacekeeping dividends and the benefits and limits of support and how they create an enabling environment for women’s participation in peace and political processes, increased collaborations between policymakers and researchers on data collection and the formulation of effective recommendations are critical.

Despite the challenges in health care access and violence against women, women are working against tremendous odds to bring about peace and continue to advocate for their meaningful and full political participation. They are adamant that we cannot have a world where we are battling wars and a pandemic at the same time.

It is therefore encouraging that the Secretary-General’s call for a global ceasefire has been endorsed by many Member States, regional organizations and civil society groups especially women’s organizations. A PRIO and ETH Zürich project, tracking the adoption of ceasefires, notes the adoption of humanitarian ceasefires in a number of conflicts as a result of the pandemic. It is important to note, however, that many failed to hold over time. The Under-Secretary-Generals of Peace Operations, Political and Peacebuilding Affairs and UN Women recently drew attention to the critical role of women, including in the ceasefire campaign, in strengthening the likelihood of success in conflict resolution efforts. Women’s inclusion in negotiating the language of ceasefire agreements is critical also as scholars have suggested that many of these agreements are weak on language related to women’s leadership, security and rights, including on the prevention of conflict-related sexual violence.

Women’s networks and organizations are key partners of UN peacekeeping. They lead innovative community approaches to resolve conflicts and wage peace and reconciliation. Unsurprisingly, women’s networks are now critical vehicles for women’s participation in COVID-19 prevention and responses and in ensuring women continue to have a voice in the ongoing political life of their countries. As research on women’s roles in communal peacebuilding and their interaction with peacekeeping missions remains very limited with a few great exceptions, we see immense opportunities for research-policy collaboration to improve our knowledge and learning.

In South Sudan, the response measures to COVID-19 have reversed gains in women’s participation as peace builders. Concerned by this turn of events, and specifically by women’s inability to participate in and monitor the peace process as efforts moved online, the UN Mission in South Sudan (UNMISS) swung into action to support women’s organizations to participate in the national Disarmament, Demobilization and Reintegration commission’s online discussions on community violence reduction. Building on such partnerships with women’s organization is important as research shows that such collaborations with UN peace operations can increase the chance of successful peacebuilding and, hence, durable peace.

On another hopeful note, the pandemic’s challenges have led women’s organizations to increase their collaboration, such as issuing joint political communiques and spearheading outreach including to marginalized women and IDPs. In Cyprus, the Gender Technical Committee established by the country’s two leaders to support the peace process re-started official meetings, in line with the Security Council’s call for the group’s revitalization and released a statement on the upsurge of violence against women and girls in the context of the pandemic, and called for the gendered impact of the pandemic to be recognized and addressed. In the Democratic Republic of the Congo, MONUSCO, supported women’s organizations’ advocacy with the National Solidarity Fund for COVID-19, calling for a gender analysis of the pandemic and for funding to be put aside specifically for women.

Finally, in Mali, MINUSMA, increased its efforts to ensure that the extensive work it had undertaken with women candidates and women’s groups preparing for May legislative elections paid off. As a result, women came out to vote in large numbers and more women ran for office. They now make up 27.8% of the elected members of parliament. This nearly reaches the 30% quota set out in Mali’s electoral law and is higher than the global average. This is critical for two reasons. Studies indicate that Malian women have been excluded from the peace process at the local level and other research shows that international support to national processes is important for ensuring a more positive trajectory for women’s rights long term.

That women’s gains in peace and security processes would be so severely threatened in 2020, which marks the 20th anniversary of the Security Council Resolution 1325 on Women, Peace and Security is a terrible irony. But as we have argued, the pandemic has put under a harsh spotlight how deeply gender inequalities are woven into the fabric of society. To overcome them, we must all step up our partnerships with women leaders and women’s organizations who are on the frontlines of efforts to ensure women’s rights, including the right to lead peace and political processes, survive this pandemic

We believe that this further underlines the importance of strengthened partnership between research and policy. Scholars still have a very limited understanding of how gender equality can be achieved and maintained in post-conflict processes and what policies are likely to be most effective. Several challenges hinder progress. As demonstrated, two fundamental gaps exist. One is a lack of quality global data on women’s participation, gender equality, and policies, and the second is the gap between the data that does exist, and its application on the ground. Here, we need to join forces to compile, disseminate and share information and results in the 2020 and post-2020 period.

The global COVID-19 pandemic is a wake-up call. If policymakers, researchers, and women’s organizations can more closely partner to interrogate and invest in gendered conflict analysis and translate their learnings into practice, we will emerge stronger and more gender equal from this conflicts and crisis.