In October, North Cyprus experienced a highly contested leadership election after a COVID-imposed delay. This stirred new debates over the realism of a possible federal solution for Cyprus. During his five years in office, Mustafa Akıncı, the left-wing candidate running for re-election, had expressed strong support for federation and had been critical of the Turkish government’s role in the island and the region.

In the election, he was beaten by the main right-wing party’s candidate, Ersin Tatar, who had the backing of the Turkish government and promised to push for other solutions to the Cyprus Problem, including recognition of their state. In this blog post, Mete Hatay at the PRIO Cyprus Centre provides background and analysis of the current developments. 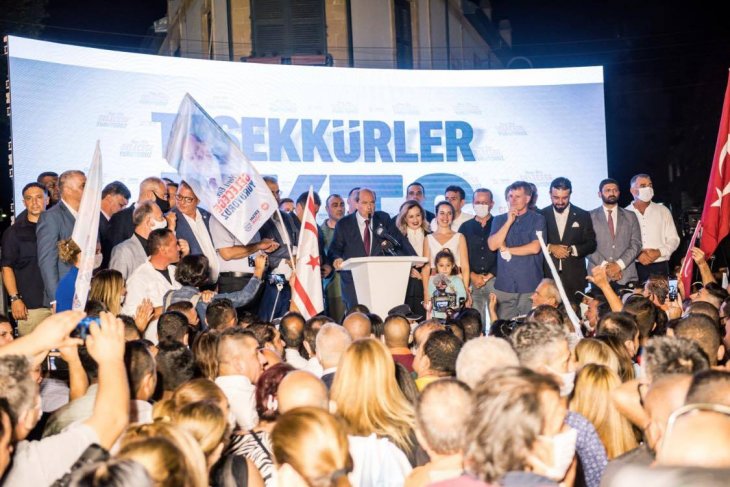 The literature on de facto states usually discusses a “parent state” and a “patron state.” The “parent state” is the one from which the de facto entity has, for whatever reason, broken away.

The “patron state,” on the other hand, is the entity that sometimes facilitates the separation and certainly aids the unrecognized entity once it is on its own, protecting, supporting, and sometimes recognizing it. For example, Russia acts as the patron state or protector for Abkhazia and South Ossetia, while Georgia is their parent state.

Because of their isolation from the rest of the world, de facto entities have highly assymetrical and dependent relationships with their patrons

Because of their isolation from the rest of the world, de facto entities have highly assymetrical and dependent relationships with their patrons. De facto states are often quite small, with miniscule populations, while patron states tend to be regional giants. Hence, even if the patron state does not use the strength that its protector status gives, dependence constantly casts a shadow over its relationship with its client.

Because of such assymetry, citizens of de facto entities often find themselves feeling gratitude and appreciation for the help they receive, but also simultaneous resentment about its form. In other words, contrary to popular belief about de facto states working closely with their patrons, indeed being their puppets, the relationship is always complex and usually contentious. Moreover, the tug-of-war between gratitude and resentment tends to come to the surface in election periods.

The de facto administration in Cyprus’s north is one such entity, having emerged in 1974 following a Greek-backed coup attempt and Turkish intervention. In 1983, the statelet declared its independence under the name “Turkish Republic of Northern Cyprus” but to this day remains recognized only by Turkey. Turkish Cypriots were the ones who declared this new state, after the collapse of the 1960 Republic of Cyprus, in which they were founding partners.

After intercommunal fighting began in 1963, Turkish Cypriots first retreated to militarized enclaves, where they founded a temporary administration on 3% of the island’s territory, then after 1974 gathered in the divided island’s north, where they established the statelet that they have since tried to sustain.

However, even looking at the founding of the so-called TRNC, we see that Turkish Cypriots always imagined it as a temporary step on the way to the bizonal, bicommunal Federal Cyprus that they hoped to establish, where they anticipated being an equal federal entity.

A federation has generally remained on the table

Of course, this vision has changed with time and the Zeitgeist of particular moments. It may be articulated with different emphases depending on the regime in Turkey. There have even been moments when it was not articulated at all. A federation has generally remained on the table, however, because it is the solution that the international community has consistently supported. In the meantime, developments in the negotiations and the perceived prospects for a federal solution have always influenced politics and voters in the island’s north.

The Turkish Cypriot leadership election that had its first round on 11 October initiated new discussions about the closeness or remoteness of a federal solution. The last concrete hopes for a solution emerged during the 2017 talks in Crans Montana, when there was a widespread perception that a negotiated solution was close. However, when Greek Cypriot President Nicos Anastasiades walked away from the table, he also allegedly whispered to Turkish Foreign Minister Mevlüt Cavusoglu that they needed to talk about other solutions besides only a federation. This whisper, in turn, led the Turkish government to adopt the idea that it was time to move beyond a federal solution and to begin preparations to put other options such as confederation on the table.

These developments would stir up politics in North Cyprus. For this reason, the widening gap between the leftist parties that view federation as the only acceptable and realistic solution and the centrist and right-wing parties that support a separate state would become a chasm as the presidential election period approached. Because of this, the fact that Turkey had changed tracks and had, at least rhetorically, abandoned the UN-backed federal solution was itself enough to make Turkey an active party in the elections.

Turkish Cypriots’ fifty-year dependence on their patron state and emotional ties to the Republic of Turkey mean that, like it or not, Turkey inevitably plays some role in most elections. And until quite recently, Turkish Cypriot politicians never hesitated to invite to the island representatives of Turkish political parties, particularly those in power. In some periods, the contests between various Turkish political parties seemed to be reflected in Cyprus in miniature. The difference this time around was that in contrast to the intervention of Turkey’s many political parties, with diverse political positions, the October election experienced instead orders coming directly from the government center in Ankara.

Intervention was made from one source and in a very open way. Of course, every intervention has its beneficiary. In this case, the invitation to intervene was given by the Prime Minister and leader of the conversative nationalist National Union Party (UBP), Ersin Tatar. Selling himself as Turkey’s man at every opportunity, this former finance official repeated from every platform that he was the candidate that Turkey wanted and preferred.

After some time, Turkey also got into the game by initiating a campaign against sitting president Mustafa Akıncı, who was running for re-election and had been insisting on a federal solution and critical of Turkey’s new strategy.

The Turkish government’s intervention consisted primarily of sending MPs and bureaucrats to disadvantaged areas of the island and providing direct financial assistance or the promise of assistance to people in economic straits. Only about ten days before the first round of the election, the Turkish government invited Tatar to Ankara, where they announced the opening of the ghost city of Varosha, an event that took place only three days before the election.

Not only did the Turkish government honor Tatar with such invitations and signal its desire for his election, but they clearly financed moves intended to help him, such as when the Turkish Cypriot government led by Tatar sent financial aid directly to the bank accounts of 10,000 persons.

Moreover, leading up to the election, both UBP and Turkish MPs and advisors canvassed village sports clubs and associations, providing financial aid, while AKP trolls used social media to engage in an anti-Akıncı campaign. Polling was used to show Tatar being ahead, while social media advertising and videos were used to depict Akıncı as a traitor ready to sell out Cyprus and an enemy of Turkey. Businesspeople reported pressure and threats, while a general fear was created that if Akıncı was re-elected, Turkey might cut off its financial aid to the island.

Along with this overt intervention, ongoing hydrocarbon issues and accompanying regional power games, combined with Turkey’s support for Azerbaijan in its war with Armenia, meant that nationalists in the island became mobilized and focused on UBP’s candidate. The election quickly turned into a referendum between those who swore allegiance to Turkey, as the only country that recognized their de facto statelet, and those who wished to have a more equal and respectful relationship with their parent state. Because of this polarization, results of the first round showed that the political center had collapsed. The four centrist parties could not garner enough votes, and the second round became a contest between Ersin Tatar, who openly declared his pride in being “Turkey’s man,” and Mustafa Akıncı, the federalist who insisted on respect.

When the votes were counted, Tatar won 52% in the second round. Akıncı won in the urban areas, where there is a strong middle class with job security, but he lost in the rural areas. The island’s North was divided between East and West, with Turkish settlers living primarily in the rural areas of the east supporting Tatar. This, in turn, reawakened conflicts between Turkish Cypriots and Turkish settlers that for some time had been forgotten in favor of left-right and federal-confederal dilemmas.

It should not be surprising that the first person besides Turkish authorities to announce that he respected the results of the election and to congratulate Tatar was none other than Republic of Cyprus President Anastasiades. In turn, the United Nations announced two days after the election results that it would facilitate a social dinner between the two leaders.

All of this began with Anastasiades allegedly whispering in Cavusoglu’s ear that they should discuss other solution options. We will see if this rumoured whisper turns into an official proposal, and if that official proposal can turn into new parameters for a solution that both sides can accept.

I am waiting for “Turkishness” to demonstrate to Cypriots the danger of remaining silenced as a divided People.

It may be Erdogan’s picnic this spring, or it may be sooner, but i believe the other half, as i like to call them, not “Cypriot Turk”, or “Cypriot Greek” if you will but, Greek and Turkish Cypriots will be marching united in solidarity, in what is their country illegally occupied, exposing who in affect are the subjugators of all of them.