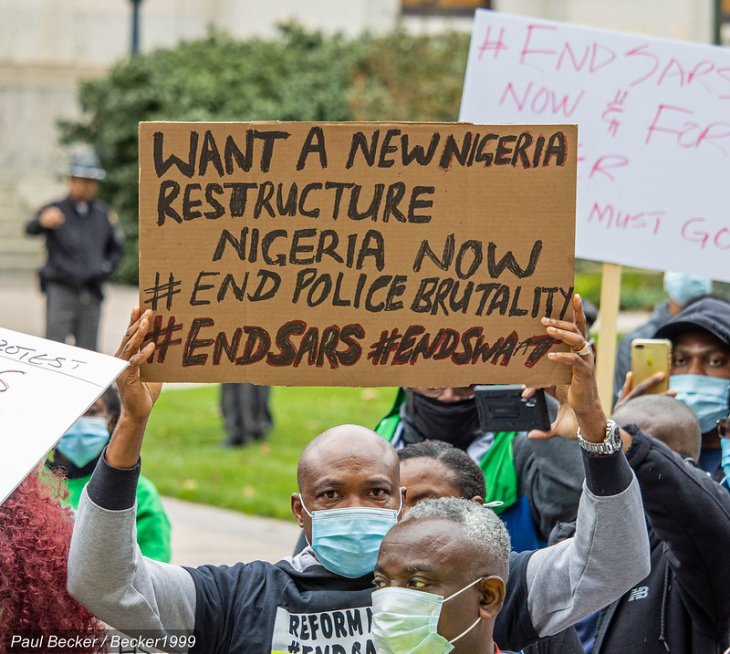 In the past weeks, the Nigerian city of Lagos had been rocked by numerous youth-led protests against police brutality by the Special Anti-Robbery Squad, also known as SARS. These protests which started peacefully turned deadly with numerous reports accusing the Nigerian police officers of shooting the demonstrators, resulting in at least 10 deaths and dozens more wounded.

Created as a special branch of the Nigerian Police force in 1992, SARS has been tasked to deal with firearms and robbery related crimes.

However, over the recent years, the group has become highly controversial due to its association with violent acts such as extrajudicial killings, torture and other illegal activities. A report published by Amnesty International in June 2020 revealed a pattern of abuse of power and human rights violations. The reports highlighted at least 28 cases of torture, extra-judicial execution and ill treatments of civilians between January 2017 and May 2020 by officers belonging to SARS. The Nigerian authorities’ failure to bring the perpetrators to justice not only enraged people, but soon, thousands of youth led people to take to the streets in cities across the country with “#EndSARS” banners; clearly voicing their grievances and dissatisfaction with the current government’s handling of the situation. Despite the Nigerian government denouncing the group in October 11, the continued protests highlight that this is not the only issue youth are dissatisfied with.

With over 60 percent of its population under the age of 25, many sub-Saharan African states continue to face tremendous challenges in meeting the demands of their populations’ largest share. Across the region, poverty and youth unemployment, for both genders in sub-Saharan Africa is among the highest in the world. With limited general opportunities combined with poorly developed educational infrastructures and vocational trainings that meet the needs of the informal labour market, many young people are left unemployed and are at risk of being recruited by regional terrorist groups. The current situation in Nigeria perfectly demonstrates this.

As Africa’s most populous nation, more than 60% of Nigeria’s roughly 200 million population constitutes youth under the ages of 25, a trend which is expected to continue in the coming years. Youth unemployment and lack of opportunity to access basic services such as good education and healthcare remains a challenge faced by most of the country’s large youth cohort. The combination of population growth, economic and political exclusion has resulted in the country, especially its Northern region, experiencing a surge in terrorist attacks undertaken by various Islamist Jihadist groups operating cross-borders (e.g. Boko Haram). These attacks have resulted in the deaths of thousands of civilians and further economic deprivation of people within this region.

Economic Stagnation, COVID-19 and the Role of Social Media

As if the existing stagnated economic situation wasn’t enough, the coronavirus pandemic has also exacerbated the poor economic conditions across the West African region, and devasted the hope of harnessing the region’s economic growth led by its youth working forces. For example, as a result of the pandemic, African Development Bank claims that West Africa’s economic growth which was expected to expand by 4% in 2020 is now projected to contract by 2% and could potentially decline by as much as 4.3%. The magnitude of the devastation caused by this pandemic has various socio-economic, political and security implications. Recently, the Nigerian government statistics revealed that around 40% or more of the population lived in extreme poverty, and this condition is expected to worsen because of the global coronavirus pandemic.

Meanwhile, the important role played by social media in this protest cannot be understated. What began as peaceful street protests has not only resulted with the ending of a notorious group seen as a tool used by the elites to crackdown on the majority poor, but it has also encouraged the Nigerian youth to demand for wider political and economic inclusion.

Thus, what does the future hold for the Nigerian youth?

It is important to note that with the government agreeing to disband SARS and adapt new police reforms, many will interpret this outcome as protests succeeding with its main objective. However, how will this translate into fruitful political dialogues between President Buhari and the country’s youth? Such a dialogue resulting in further peaceful resolutions and long-term improved economic conditions for the Nigerian youth remains to be seen.

Repression and oppression only leads to rebellion. People may fear for a while but in the long run there will be reaction. Development, inclusion and job creation to ensure that the general person including the youth are occupied is the way to go. If only the leaders could be visionaries that see beyond themselves and what they can get will be the day poverty is eradicated.