In 2016, comparing president-elect Donald Trump to all-time villain Adolf Hitler seemed overdrawn. It ultimately proved to be exaggerated in 2021, with the transition of power to Joe Biden completed. However, during his presidency, Trump has taken actions similar to the ones the Nazis used to consolidate their power. This is no partisan political statement, but the result of a simple test.

Before Trump took office, I published an analysis of the Trump-Hitler comparison on the Monkey Cage blog of the Washington Post. I pointed to four areas where Trump could copy key moves of power consolidation pioneered by the German Nazis. Then, I kept quiet on the matter for four years. History has delivered the results. Let’s take a look. 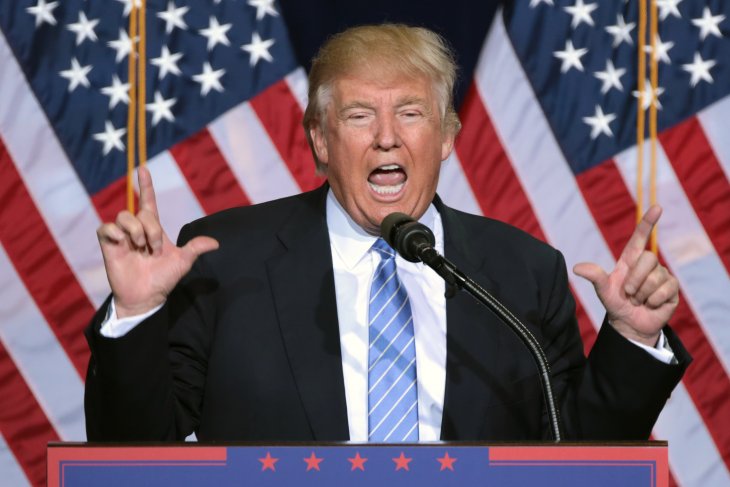 In my 2016 post, I first pointed out bottom-line changes to German society after 1933:

Nazi policies concentrated on building a cohesive national majority, to unite ‘ethnic’ Germans against Jews, foreigners, homosexuals, political critics and other minority groups. The  contemporary analogy would be Trump actively pitting white Christian America against minorities in the years ahead.

Political polarization has increased during the Trump presidency. This is especially visible since the killing of George Floyd in police custody and similar high-profile incidents involving police brutality against minorities. Riots and deadly confrontations between predominately white Trump supporters and more diverse “Black Lives Matter” activists have occurred and polarized US politics along ethnic lines.

Beyond this general outlook, I highlighted four key steps that were taken by the Nazis to consolidate their power. Using history as a guide, I translated them in scenarios for contemporary America. The first step is scapegoating. I wrote:

Scapegoating was a Nazi maneuver to blame minority groups for policy failures and the weak economy. Trump has blamed foreigners and minorities for taking away jobs and killing Americans, but we need to see if this rhetoric from the campaign trail continues once he takes office.

Moreover, Nazi ideologues drew connections between their adversaries: to them, Marxists were essentially Jews, and Jews were connected to big money, so they alleged a global conspiracy against “racial” Germans — the “Jüdisch-Bolschewistische Weltverschwörung.” The equivalent today — an invented conspiracy of Trump’s domestic critics, minorities and international adversaries — would be a clear parallel and warning sign.

Trump has continued to blame foreign and domestic enemies for his policy failures. China has been blamed for the COVID-19 pandemic. Domestically, violent Anarchists, left-wing cancel culture, and the “deep state” have been blamed. Trump has never connected these dots into a Nazi-style world conspiracy, but his most ardent followers have. In the popular QAnon conspiracy theory, a child-abusing, state-run conspiracy, composed of global elites, is responsible for a wide array of social problems. Such conspiracy theories were not originally proposed by Trump, but he has embraced them, by drawing a “Q” in the air, referring to the state department as the “deep state department”, and by proposing that his reelection was stolen by a conspiracy. In summary, Trump has relied heavily on scapegoating.

Trump has repeatedly lashed out at reporters by calling them “Fake News”. He also attempted to silence critics on Twitter and sued the New York Times.

A second component of the Nazi power consolidation was media co-optation. I wrote:

Media co-optation (“Gleichschaltung”) proceeded in two steps in Nazi Germany: extending ideological command over the media where possible and shutting down those media outlets Hitler could not control. In the United States today, this type of autocratic control would be virtually impossible, though attempts at censorship are imaginable. Trump has had openly hostile relations with major newspapers such as the New York Times and The Washington Post, and threatened legal action during the campaign. The role of social media in the election points to future possible points of contention. One factor that contributed in some part to Trump’s victory was propaganda containing false but factual-sounding statements that discredited Hillary Clinton on social media.

Facebook has announced that it will do more fact-checking on trending stories. Mass-media technology has changed dramatically since the 1930s — and Trump has no legal basis to shut down critical outlets. But legal quarrels between his administration, the media and social networks would be a red flag, and a threat to the First Amendment.

Four years later, the struggle over fact-checking has prevailed. Trump has repeatedly lashed out at reporters by calling them “Fake News”. He also attempted to silence critics on Twitter and sued the New York Times. The largest and most consequential attempt at media co-optation came with proposed changes to legislation that could eliminate fact-checking from the Internet. Under U.S.C. section 230, online publishers, such as social media companies, are protected from liability for presenting, but also restricting information provided by third parties. This legislation allows Twitter and Facebook to label published information as disputed or not trustworthy. If repealed without replacement, labeling something as factually incorrect could be result in costly lawsuits. Even after having lost the election, Trump threatened to veto military funding unless Section 230 was repealed. Calling Trump’s word into question would have been financially impossible for most providers, had this attempt been successful. In this sense, Trump has attempted media-cooptation.

A third component of the Nazi reign was paramilitary organizations. I wrote:

Paramilitary organizations were also part of the Nazi effort to boost national-majority cohesion. The “Sturmabteilung” (SA) violently attacked and intimidated adversaries, most notably on “Kristallnacht” in 1938, when they carried out large-scale attacks on Jews and political opponents. Thus far, the president-elect’s reaction to post-election racial violence and harassment has been a call to “stop it!” Trump rejected an endorsement from a KKK-linked newspaper before the election, but continued praise from former KKK leader David Duke leaves many Americans concerned about the potential for a rise in SA-type activities. Even more alarming would be any indication that the U.S. government would tolerate violence or racial intimidation from white supremacist groups.

In the wake of the attacks on the Capitol on January 6, direct comparisons to Kristallnacht and Hitler’s early violent power grab, the “Beer Hall Putsch” have been drawn by US politicians. Earlier than that, Trump has refused to condemn deadly right-wing attacks: after the Charlottesville car attack, Trump commented there were “very fine people on both sides”. Instead of rejecting paramilitary organizations threatening violence, Trump simply asked the “Proud Boys” to “stand down”. The threat of paramilitary violence coming from QAnon, local militias, and anti-BLM vigilantes was part of his presidency and culminated in a deadly attack on the US capitol, directly instigated by Trump. However, there is one important difference to Nazi Germany: Trump did not organize and directly control paramilitary organizations, labor service, and youth indoctrination. The Nazis did that with the SA, the Reichsbund organizations, and the Hitler Youth.

Finally, I identified emergency laws as a cornerstone of Nazi rule:

Emergency laws came about in Germany after the 1933 arson attack on the Reichstag (Germany’s parliament). Hitler used the threat of terrorism and foreign aggression to justify sweeping autocratic policies, including the 1933 Enabling Act (which let the government issue laws without the Reichstag). Similarly, the Reichstag Fire Decree in 1933 gave Hitler the power to suspend most Germans’ political and individual rights, effectively outlawing opposition parties. Changing the U.S. Constitution to abolish elections and remove freedom of speech is hardly imaginable. The United States has an uninterrupted democratic history, while Hitler was able to tap into nostalgia for the times under the last German emperor. But the United States has had similar measures in place since Sept. 11, 2001, which have boosted government surveillance while limiting checks and balances on domestic policing and the use of military force.

Trump has attempted to directly control politics while circumventing checks and balances on multiple occasions. However, the US has not seen an abolition of checks and balances comparable to the Enabling Act. Instead, “ruling by decree” was a constant element of his presidency, starting with banning Muslims from entering the country and mobilizing the National Guard during BLM protests. Additionally, he prompted to designate ANTIFA a terrorist organization, which in turn would have lowered legal barriers for employment of force.

With regard to international conflict, the picture is mixed. Trump has made good on his promise to not start a war, but he has come very close at times. Tensions with North Korea increased early on in his presidency, culminating in threats of “fire and fury” and dismissing Steve Bannon for his  observation that there is no military option for the Korean peninsula. The assassination of high-ranking Iranian General Qasem Soleimani brought the countries to the brink of war, and retaliatory strikes were conducted against a US base in Iraq.

So what’s the final verdict on the comparison? Clearly, some predictions from 2016 have proven accurate.

So what’s the final verdict on the comparison? Clearly, some predictions from 2016 have proven accurate. The rise of racial tensions under Trump and Hitler and analog developments in the four  highlighted policy areas add weight to the comparison. But the analogy has failed to predict the course of the United States. Germany in 1933 was still grappling with its defeat in World War I, was experiencing the Great Depression, witnessed very high levels of internal violence between Nazis and Communists, and rejected its foreign-imposed democracy. Some analog circumstances exist in the United States today: the legacy of the 9/11 wars, the COVID crisis and the Great Recession before it, and the deadly violence surrounding riots and protests all fit the overall picture.

But American democracy is home-grown and held in high regard. Major parts of the Republican party, social media providers, and even Trump’s most loyal news outlets have refused to go along with unfounded claims of election interference. The Enabling Act of 1933 turned Germany from a democracy into an autocracy. At a similar junction, the United States turned the other way in 2021.

A long, revelatory review (by Geoff Olson, for Common Ground magazine, 01/10/2018) of the book ‘The American Deep State: Wall Street, Big Oil, and the Attack on U.S. Democracy’ notes that the book’s author describes big oil CEOs and lobbyists in the U.S. as being a very large part of the American Deep State.

Therefore, it would be a large part of the national Capitol’s ‘swamp’ that Trump and his fans claim has corrupted DC and ergo is after his presidency.

So, considering the Trump administration’s kowtowing to big fossil fuel (mostly via the loosening of environmental protections), he, ironically, would seem content with wallowing in it—far from genuinely wishing to “drain the swamp”, as he and his fans claim.

A long, revelatory review (by Geoff Olson, for Common Ground magazine, 01/10/2018) of the book ‘The American Deep State: Wall Street, Big Oil, and the Attack on U.S. Democracy’ notes that the book’s author describes big oil CEOs and lobbyists in the U.S. as being a very large part of the American Deep State.
Therefore, it would be a large part of the national Capitol’s ‘swamp’ that Trump and his fans claim has corrupted DC and ergo is after his presidency.
So, considering the Trump administration’s kowtowing to big fossil fuel (mostly via the loosening of environmental protections), he seems content with wallowing in it—far from genuinely wishing to “drain the swamp”, as he and his fans claim.

I found this post very informative and evenhanded. Glad I checked it out. Still think trump is a dangerous element to our democracy. Liberals should be careful though how far left their agenda swings.