Yemen’s conflict has been described as a forgotten war. Peace, up until recently, has been even more forgotten. The new US administration has begun a new a military and diplomatic track to end the fighting. Biden has made Yemen one of his foreign policy priorities, selected veteran diplomat Timothy Lenderking as a new US Special Envoy to Yemen, and decided to end American support for offensive operations in Yemen –  most importantly arms sales to Saudi Arabia – while also reiterating support for the territorial integrity of the Saudi Kingdom. The first step of the new administration concerning Yemen was to revoke the foreign terrorist designation of the Houthis, a measure that the former Trump administration put in place in January 2021. While a new administration can revoke previous decisions from one day to another, realities on the ground take their own course. Soon after the US policy changes the Houthis launched renewed attacks on the government-controlled northern city of Marib and intensified cross-border attacks on Saudi Arabia. 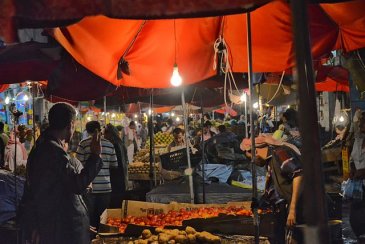 Hodeidah Market in 2013. The port of the city is one of the main points of entry for food in Yemen. Rod Waddington via Wikimedia Commons

The last tangible development in the Yemeni peace process took place three years ago when the Stockholm Agreement was concluded between the Houthis and the Government of Yemen, mediated by UN Special Envoy Martin Griffiths. The Stockholm Agreement was first and foremost aimed at avoiding the Saudi-led coalition’s assault on the port city of Hodeidah. The planned attack, dubbed Operation Golden Victory, rang the alarm bells of international organizations who warned that such an attack could result in a humanitarian catastrophe, as more that 90% of commercial supplies and humanitarian aid enters to Yemen through the port of Hodeidah.

The Hodeidah ceasefire, at the time of its conclusion, was hailed as a critical step toward the comprehensive settlement of the conflict.

The Stockholm Agreement consists of three separate agreements: first, an agreement on the city of Hodeidah and the ports of Hodeidah, Salif and Ras Issa; second, a prisoner exchange agreement; and third, the understanding on the city of Taiz. Since 2018, unfortunately, little progress has been made toward implementing these agreements. The Hodeidah ceasefire, at the time of its conclusion, was hailed as a critical step toward the comprehensive settlement of the conflict. To ensure that the ceasefire was honored, the UN Security Council Resolution 2452 mandated a 75-member civilian observer mission – the United Nations Mission to support the Hodeidah Agreement (UNMHA) – to be deployed to Hodeidah for an initial six months.

Since 2018 the mandate of UNMHA has been renewed twice (currently it lasts until July 2021) but due to the pandemic the monitoring team essentially left the city (only a 12 member team remained in the country). Most importantly, Hodeidah remains a deadly and dangerous place: the Houthis consolidated their gains on the west coast, and violence has significantly escalated on other fronts. A comprehensive settlement as well as a nationwide ceasefire seem like distant goals now. What happened to the ceasefire in Hodeidah and what did UNMHA members experience in Yemen?

In a recent article I published in the Special Issue on Ceasefires in the journal International Peacekeeping, I looked into these questions, emphasizing four factors that made the fulfilment of UNMHA’s mandate challenging:

To analyse these four factors, I reviewed all 44 UN documents related to Yemen between December 2018 and September 2020 and conducted interviews with members of UNHMA as well as with local Yemenis.

Here is what I found out:

The window of opportunity to build trust and fulfil mandates in these violent contexts has proven to be extremely brief.

All in all, UNMHA has been in a difficult position since its deployment. Both factors related to the Stockholm Agreement and to the conflict made it virtually impossible to fulfil the mandate. The Yemeni context is unfortunately not a uniquely violent environment for monitors. Ceasefires in South Sudan, Syria, or Ukraine have all been followed by the deployment of international monitors. The window of opportunity to build trust and fulfil mandates in these violent contexts has proven to be extremely brief.

Importantly, it is UN Security Council Resolution 2216 from 2015 that aims for the restoration of the internationally recognized government of Yemen and requires the Houthis to withdraw from the occupied territories and to relinquish all seized arms. This resolution is far removed from today’s political realities. For example, the STC did not even exist at the time that this resolution was adopted, yet now it is part of the government of Yemen. One crucial task of the Biden administration will be to negotiate a new Security Council Resolution. The key dilemma however is this: What will be the political future of Yemen? Can there be a power-sharing government between the Houthis, Hadi, and the STC? And most importantly, how can the Yemeni nation heal from years of trauma without adequate transitional justice measures? Currently, none of the three parties seem interested in finding answers to these questions.