More than 1/3 of those tested for Covid-19 in Myanmar now test positive. The crematorium in Yangon can hardly handle all the bodies. Many health workers remain on strike since the February 1 coup. When they try to help people on a voluntary basis, they risk arrest. Social media is full of desperate requests for oxygen. 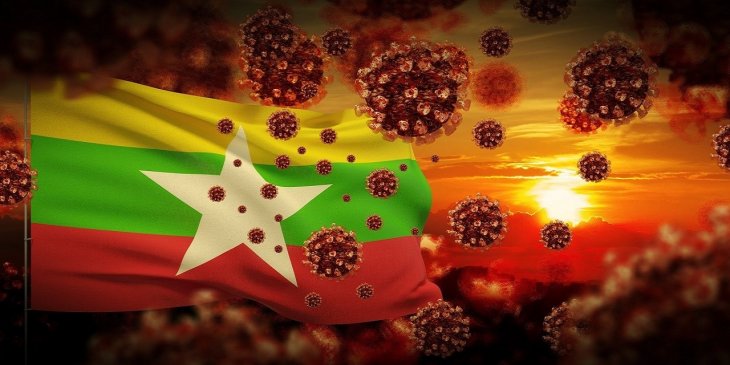 This happens in a country with no government. Neither the military’s State Administrative Committee (SAC) nor the National Unity Government (NUG), which seeks to represent the national assembly elected last November, has the means needed for fighting the pandemic. The NUG has just announced the creation of a new health task force but there is only so much a clandestine government can do. Myanmar’s military forces (the Tatmadaw) reserve the country’s best hospitals mainly for its own personnel. One military hospital in Yangon has seen a rapid spread of the Covid-19 virus among its staff.

In much of Rakhine State on the Bay of Bengal, it is the rebel Arakan Army (AA), benefitting from an informal bilateral ceasefire with the military since November last year, that takes the lead in fighting Covid-19. A big question is whether anyone takes care of the health needs of the 400,000-500,000 Rohingya who were not driven out of Bangladesh in 2016-17 but remain in Rakhine’s northern townships. Armed struggle between the military and local armed groups is ongoing in Karen, Kachin, Karenni, Shan and Chin states, and also in regions such as Sagaing. According to The Frontier, after the military authorities had last week ordered everyone to stay at home in Hpakant township of Kachin State, the military shelled two villages forcing the inhabitants to flee. Two superior officers in ethnic armed groups were reported to have died from Covid-19 this week, a key AA commander in Rakhine and the overall commander of the Democratic Karen Benevolent Army (DKBA).

In many places there is now no functioning local administration. When SAC replaces the legitimate village or ward administrators with people loyal to the army, the local population often reacts by threatening or assassinating the military appointees. Such popular anger has led multiple military appointees to resign, leaving behind them a void or a clandestine legitimate leadership with no connection to central authorities.

The pandemic threatens to decimate Myanmar’s population and further deepen the social and economic crisis that has worsened every day since the February coup. The ILO estimates that 1.2 million people in Myanmar have lost their jobs this year. This comes on top of even more job losses last year, due to the first phase of the pandemic. Amidst its misery, Myanmar could become a breeding ground for new virus mutations that might spread to its neighbouring countries. Quite a few Myanmar immigrants in Chiang Mai and Mae Sot of northern Thailand have already tested positive. China has reported infections in Yunnan province among people who have been to Myanmar and is building an electric fence along parts of its border. Japan has announced that anyone arriving from Myanmar must face six days in a quarantine centre and take two tests.

Myanmar cannot handle the situation on its own. There is an urgent need for humanitarian intervention. The UN Secretary General, his special envoy and the not yet appointed ASEAN special envoy should do their utmost to enlist Myanmar’s neighbours, China, Laos, Thailand, Bangladesh and India, in an effort to compel the military junta to let a non-political emergency committee take charge of the fight against the pandemic. It should be led by health experts appointed by the UN or World Health Organization. The committee must be authorised to consult with both the SAC and NUG as well as Myanmar’s main political organisations, notably the NLD, USDP and leading ethnic parties. It should have a strong secretariat, with full freedom to decide on preventive measures and use social media for communication with Myanmar’s population. A necessary condition for the committee’s work will be a temporary humanitarian ceasefire, to be pledged and respected by the Tatmadaw as well as all ethnic armed organisations and people’s defence forces.

It is essential for all governments concerned to urgently back up these sensible recommendations and for the UN Secretary General to engage the UN actively on the basis of a strong mandate from the UN Security Council, perhaps inspired by the recent success in obtaining unanimity for maintaining a humanitarian corridor to Syria.

This assessment by Stein Tonnesson is very helpful. The recommendations made at the end should be forwarded to relevant international offices.