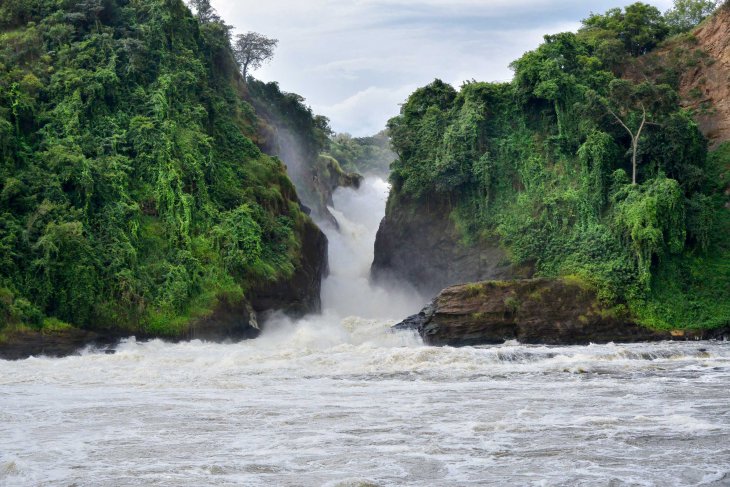 Like many countries in Sub-Saharan Africa, Uganda finds itself with a steadily growing population and emerging economy. Simultaneously, the government struggles to provide basic services to its growing population, while preserving its natural resources.

Encapsulated within this struggle is an ongoing debate between conservationists and the Ugandan government over the construction of hydroelectric dams in the Murchison Falls National Park. The struggle centers around two waterfalls that the park houses, Murchison and Uhuru Falls. Proposals to dam Murchison Falls, one of the world’s most powerful and one of Uganda’s main tourist attractions, were abandoned after strong opposition from the public, environmental conservationists, and Uganda’s tourist industry. 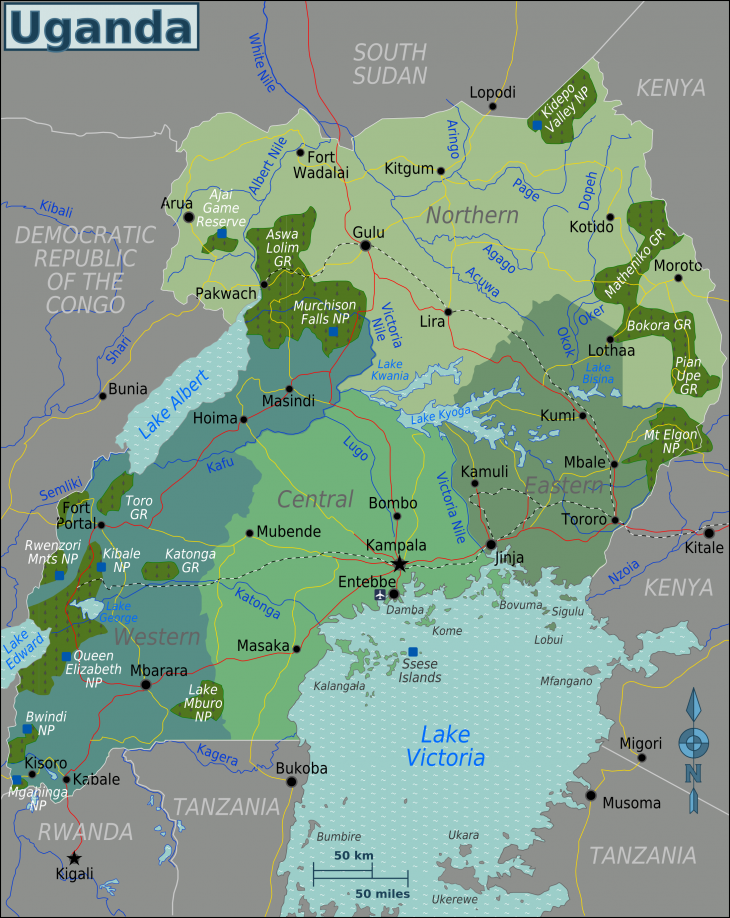 Regional map of Uganda. Murchison Falls is situated in the North West of the country. via Wikimedia Commons

Instead, the Cabinet of Uganda is now targeting Uhuru Falls, a less powerful waterfall that sits adjacent to the mighty Murchison. As of last year, the Cabinet ordered a feasibility study to be undertaken by a South African company for a 360 MW hydro plant on Uhuru Falls. This has sparked renewed protests from conservationists, who question the impartiality of the study being conducted by the dam’s future developer and expressed concern over the environmental impact.

Despite these concerns, the government argues in favor of constructing the Uhuru dam to meet the goals of its national development plan, Vision 2040. Vision 2040 aims to generate 41,738 MW of electricity by the year 2040, which has spurred multiple feasibility studies on hydropower projects along the Nile.

The controversy around the development of Murchison Falls National Park raises larger questions about the costs and benefits of the Ugandan government’s national development strategy. Before falling into the economic prosperity versus conservation paradigm, those involved should first ask what the economic “benefits” and environmental “costs” are.

Uganda is richly endowed with abundant energy resources, which are fairly evenly distributed throughout the country.

Uganda is richly endowed with abundant energy resources, which are fairly evenly distributed throughout the country. These include hydropower, biomass, solar, geothermal, peat and fossil fuels, among others. But it is hydropower that has led to the biggest increase in electricity generation in the country. Total installed electricity generation capacity has grown from 60 MW in 1954 to 1,237.49 MW in 2020[1].

This capacity is set to increase with the completion of the largest power-generating installation in Uganda, the Karuma hydroelectric power station (600 MW). The Karuma plant, combined with a number of other <50MW dams, will bring Uganda’s total capacity to 2500 MW. Additionally, there are more than five hydroelectric power stations proposed for construction, including the Ayago Power Station (880 MW) and the controversial Uhuru power project.

Yet Ugandans are largely energy poor. Though increased hydro power dam construction and investment in other sources of renewable energy in recent years has resulted in increased power generation in Uganda, many households have no access to electricity and largely rely on wood fuel for lighting and cooking. According to the Uganda bureau of statistics (UBOS), only 22.1% of all households had access to electricity (lighting) in 2018/19. In rural areas, this figure is much lower, with an estimated 8.3 percent of rural households having access to grid electricity in 2016, and most rural inhabitants using firewood for energy. Among urban households, 57.2 percent were connected to grid electricity but even then, charcoal remained a key source of energy for cooking (54%).

The low electrification rate is partly attributed to unaffordability of grid and off-grid energy sources. Electricity rates for domestic use have almost doubled between 2010 and 2020, even when generation has greatly expanded. To compensate, many households, especially poor rural households, have resorted to imported solar systems, which have a big initial cost but are supposedly cheaper than grid electricity in the long run. However, these systems are plagued by poor quality.

The Ugandan government is focusing on renewable energy sources to close the electricity gap for its citizens.

The Ugandan government is focusing on renewable energy sources to close the electricity gap for its citizens. In the last five years, it has constructed four solar plants with a capacity to ultimately generate 100 MW of energy in total. And the government continues to pursue an electrification strategy dependent on large hydroelectric dams. Considering that electricity generation has greatly increased over the past 10 years from existing dams and that electricity prices continue to rise, questions arise over the rationale of developing the Uhuru Falls dam.

The costs and risks of damming Uhuru Falls go beyond just Murchison Falls National Park. They reflect the larger risks Uganda faces with a large hydro dam electrification strategy. Though it is a controversial topic in the region, fluctuating water flows caused by upriver dams and climate change reduce the energy security of hydropower. Weak governance of the Nile as a shared resource not only raises the potential for conflict with downstream neighbors, it also puts Uganda’s dams at future risk of reduced flow.

Additionally, the dams on the Nile may be insecure to the fluctuating water levels and extreme weather events caused by climate change. Ugandans will likely remember the rolling blackouts caused by a prolonged drought in the early 2000’s or the more recent blackouts caused by flooding. Flooding that some say was the result of both unusually high rainfall and a lack of enforced regulation regarding dam waterflows.

These concerns over waterflow are especially relevant to the Uhuru Falls dam, which is a seasonal waterfall that is dry in the summer. Conservationists worry that if the dam doesn’t adequately generate power, developers may turn to Murchison Falls as an additional source. Even if developers are content with just the Uhuru Falls, the weak regulation around water flow in Uganda is a cause for concern.

The powerful waterflows of Murchison and Uhuru Falls jointly create a shallow area in the delta, important for water birds to spawn and breed. UNESCO has deemed the area a wetland of international importance. Though some proponents of the government assert that damming Uhuru falls would not affect the wetland area, the Ugandan Parliament’s Committee on Environment and Natural Resources observes that the falls are in too close proximity to each other (219 meters) for Uhuru falls to be developed independently. Therefore, there is a high risk of upsetting the wetland ecosystem by disrupting either of these waterflows.

The wetland’s biodiversity is not the only environmental risk. Large dam projects require infrastructure networks to be built around them for construction and electricity evacuation. This could potentially make the park more susceptible to illegal logging and increased urbanization, which could have an adverse effects on the 76 species of mammals the park houses.

Warnings of these adverse environmental effects have come most adamantly from Uganda’s tourist industry, which makes up about 7% of Uganda’s GDP. Conservationists argue that the dams would not only hurt the park’s ecosystem but also the Ugandan economy. The Ugandan wildlife Authority (UWA) estimates that the park generates over US$ 4.1 million a year.

The risks of developing the Uhuru Falls dam may be higher than a feasibility study can clearly show, even if done impartially.

The risks of developing the Uhuru Falls dam may be higher than a feasibility study can clearly show, even if done impartially. However, even if those risks were acceptable to the government and public, the increasing insecurities surrounding hydroelectric dams on the Nile, threatens ensured generation.

What’s more, it’s not clear whether additional generation would result in increased access and use of electricity if prices continue to rise. Meanwhile, Uganda’s tourist industry is an increasingly important contributor to Uganda’s economy, which could be negatively affected by development of the park.

The country seems to have exhausted or nearly exhausted potential spots for hydropower generation, given that it is starting to encroach on its national parks and forests which had been conserved for tourism. Therefore, rather than risk its green natural resources for a national energy development plan, the government should look to alternative renewable energy sources such as wind and solar, among others, which remain largely untapped.