Climate justice is essential if we are to succeed in preventing global warming of 1.5 to 2 degrees above pre-industrial levels. This is a point that receives far greater attention in the new Working Group II contribution to the IPCC Sixth Assessment Report than in previous reports. 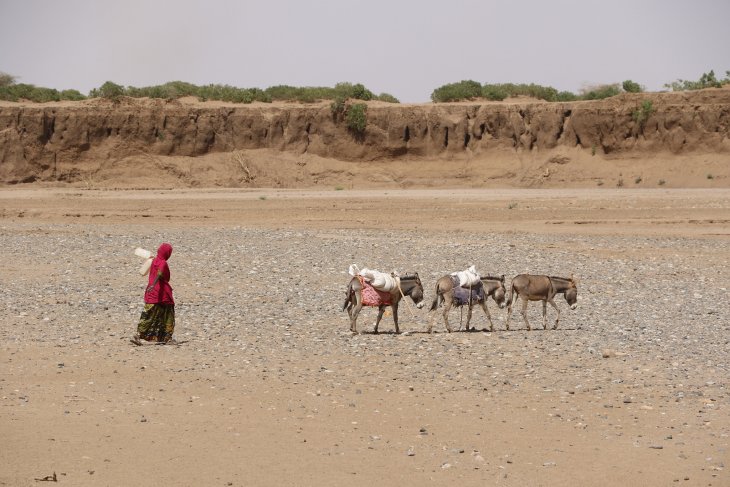 The Intergovernmental Panel on Climate Change (IPCC) published the second part of its Sixth Assessment Report on 28 February 2022. Since the previous report was published in 2014, climate change has become ever more obvious. This is reflected both in the scientific literature and in people’s experiences around the world. Increased occurences of extreme weather events such as floods, heatwaves and associated wildfires, storms and hurricanes are all examples that have dominated the news media in recent years.

The experience of climate change through more frequent extreme weather events has brought about increased interest in climate-related issues among governments, NGOs, businesses and the general public. One well known example of increased public engagement is the “School Strike for Climate”, initiated by Greta Thunberg. In line with the most recent report from the IPCC, the striking school students have also made it clear that climate policy must be based on principles of justice.

If climate policy is perceived as unjust, one risks various kinds of resistance and even rebellion.

Although the IPCC’s report expresses no opinion about the legitimacy of various protests against climate measures, the report points out that it is important that climate policy includes considerations of justice as much as possible in order to succeed.

So, what does climate justice involve? Three requirements are named in the report: just distribution (distributive justice), participation in decision-making (procedural justice), and recognition. Firstly, the distibution of the costs and benefits of climate measures must not be perceived as overly unjust. Secondly, it should be possible for affected groups to participate in the democratic decision-making process in advance of the adoption of climate measures that will affect them. Thirdly, the recognition of vulnerable or marginalized groups is necessary both to avoid unequal distribution and facilitate participation in decision-making processes.

This most recent report from the IPCC also has a greater focus on the importance of recognizing indigenous and local knowledge in order to succeed with measures to adapt to climate change. In Norway, for example, basing reindeer husbandry policies on Sámi reindeer owners’ knowledge, which has been built up over many generations, could improve the ability of reindeer herders to adapt to climate change. Climate change will lead to more variable climate conditions during winter in the north for instance with rainfall followed by frost. This leads to ice layers in the snow that may block access to pastures for the reindeer. Under such conditions, it is generally a good idea to have a good number of strong animals in the herd, such as castrates and bucks. This is also in accordance with the reindeer herders own traditional knowledge, while the Norwegian government tends to see bucks as only useful for reproduction and has been pushing the herders to decrease the percentage of such “unproductive” animals in the herd.

Recognition is thus a normative principle and a value in itself. Lack of recognition can lead to inequitable distribution and a lack of democratic participation, which in turn could undermine the success of climate policy.

The recent IPCC report also mentions tree planting on savannas and grasslands as an example of maladaptation that may harm biological diversity and undermine carbon storage, because savannas store carbon underground in the roots of the ground cover vegetation. In addition, large scale afforestation may lead to the dispossession of livestock keepers from their traditional grazing areas, which again may cause resistance to such climate projects.

In international
climate negotiations, it has been a fundamental principle that states have common, but historically differentiated responsibilities for climate change, and thus for implementing climate policies.

An equitable distribution of costs and benefits is relevant at several levels – between individuals and groups within countries, between states, and between different generations including those that are not yet born. In international climate negotiations, it has been a fundamental principle that states have common, but historically differentiated responsibilities for climate change, and thus for implementing climate policies.

This principle reflects an underlying idea that all countries have a responsibility to act, but what they can do will vary. The industrialized countries in the Global North are better positioned to decarbonize energy systems and reduce emissions, while some developing countries in the Global South will have to focus more on adapting to climate change than on reducing emissions. This also reflects that an unequal distribution of wealth and power between countries, and internally within countries, is a fundamental cause of climate injustice.

Extensive measures both to reduce emissions and to adapt to climate change will require far-reaching societal changes to achieve a green transformation. Such a transformation may happen in various ways: from a focus on the one hand on technological change and the use of markets to radical solutions such as “degrowth” on the other hand. Degrowth will involve reduced production and consumption in order to keep the climate impact within what climate and ecosystems can tolerate.

Whatever approach is adopted, the transformation must be profound and encompass energy systems, land use, urban systems, infrastructure and industrial development.

How such a transformation will be implemented in practice in different countries will also have consequences for questions concerning justice, because there is a risk that different groups will become winners and losers under the different models. Accordingly, it is important that climate policy includes justice as a fundamental principle for measures addressing both reducing emissions and adaptation to climate change.

Despite increasing awareness of the serious nature of the changes we face, reducing greenhouse gas emissions is proceeding too slowly. In addition, adaptations to climate change are lagging behind. In other words, the climate is changing more rapidly than we are adapting to the changes. The result is that local communities and authorities are having to repair damage instead of planning in advance to cope with the coming changes.

Therefore, urgent measures are required to reduce emissions globally to prevent even greater changes and to speed up the work of adapting to climate change.

In order to succeed both in reducing emissions and adapting to the climate changes that are occuring, the people who are affected by climate measures must feel that they are being heard. Thus the latest report from the IPCC states conclusively that climate policy must be socially inclusive and not experienced as unjust. In other words, climate measures must be as equitable as possible between countries, internally within countries, and between generations.

Tor A. Benjaminsen is a Professor at the Norwegian University of Life Sciences (NMBU) and an Associate Research Professor at PRIO. He is a Lead Author of the 6th Assessment Report of the IPCC.