When the first part of the IPCC’s Sixth Assessment Report (AR6) was released last summer, the UN Secretary-General António Guterres declared “Code Red for humanity”. The report documented that climate change is more extensive and occurs more rapidly than previously assumed, and showed the urgency of reducing greenhouse gas emissions.

In this blog post, seven authors of the second part of the AR6, reflect on documented consequences of climate change and what is required to minimize future loss and damage. 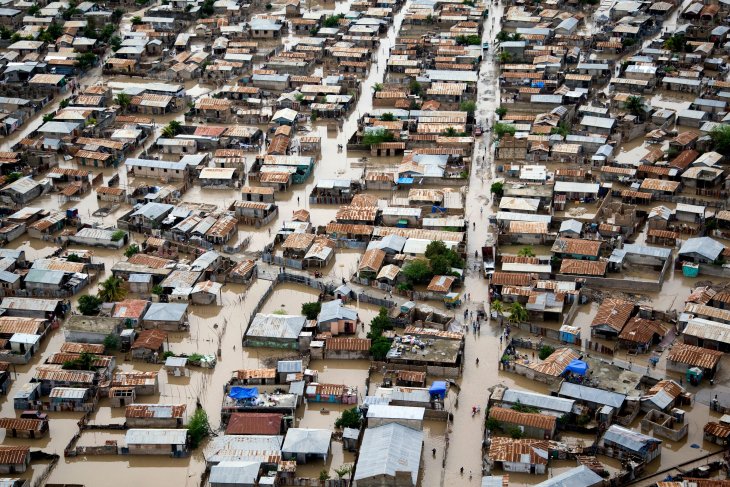 Flooding in Gonaïves, Haiti after Hurricane Tomas in 2010. Informal, densely populated urban areas like this are among those most vulnerable to future climate change. PHOTO: UN/Marco Dormino CC-BY-NC-ND

The average temperature on Earth is now 1.1°C warmer than when industrialization began in around 1850, and the warming has been particularly great in the northernmost areas of the world. The rise in temperature and the associated melting of glaciers, sea-level rise, and increased incidence of extreme weather events are caused primarily by anthropogenic greenhouse gas emissions. The concentration of carbon dioxide in the atmosphere is now higher than at any time in the past two million years.

The second part of the AR6 report was published on Monday 28 February 2022. It sums up the most recent research on how climate change is affecting ecosystems and society, the extent to which nature and society will be able to cope with changing climatic conditions, and the effects of various measures to adapt to climate change.

One of the main conclusions of the report is that climate adaptation is proceeding too slowly and measures are being implemented on too small a scale to address the major climate challenges we face. Achieving a green transition is urgent – and the transition must be global.

The average temperature on Earth is now 1.1°C warmer than when industrialization began in around 1850

The negative consequences of climate change (even if end-of-century global warming is limited to 1.5°C degrees) will be most severe in warm regions, in the Arctic, in low-lying coastal areas, and in the least developed parts of the world. Marine heatwaves have resulted in

Both on land and in the oceans, species are migrating closer to the Poles or to higher altitudes to avoid rising temperatures. The resulting changes in ecological dynamics may develop in unpredictable ways. The risk of local and even global extinctions of species and ecosystems will increase with the speed and extent of global warming.

Threat to livelihoods and food security

The IPCC estimates that 3.3 to 3.6 billion people live in areas that are highly vulnerable to climate change. Already, approximately half of the global population is affected by severe water scarcity for at least parts of the year, and the number of people affected will rise significantly in the coming years. Societies that are dependent on meltwater for agriculture will experience up to a 20 percent reduction in water availability if the global temperature rises by 2 degrees. Climate change has already reduced agricultural productivity growth in lower- and mid-latitude regions. This poses a serious threat to livelihoods and food security in societies where agriculture is dependent on precipitation that is becoming ever more variable, potentially with global ripple effects.

… the most vulnerable people often lack the opportunities, resources, and knowledge to
enable them to
relocate to start a new and better life

Extreme weather events, rising temperatures, and sea-level rise will also bring about more human displacements. At the same time, the most vulnerable people often lack the opportunities, resources, and knowledge to enable them to relocate to start a new and better life elsewhere. Climate-related migration will most likely continue to occur primarily internally within countries, amplifying existing trends in migration from rural to urban areas. Active urban planning is essential to manage this demographic change.

Low levels of economic development and poverty, food insecurity, weak political governance, and armed conflict are key factors that will exacerbate the negative human consequences of climate change. Over the last decade, mortality from extreme weather events has been around 15 times higher in poor and vulnerable countries than in the richest parts of the world. The human and material costs of climate change will accentuate this inequality in the future. The joint challenges of climate adaptation and emissions reduction are thus inherently linked to ethical issues such as equality, fairness, and distribution.

The AR6 report describes in clear words how drastic measures must be implemented if we are to reduce or reverse future damages of climate change. Global greenhouse gas emissions must be cut quickly, and the most vulnerable parts of nature and society must be protected or strengthened to cope better with the changes ahead – and the situation is far more urgent than most people seem to realize.

Radical social change – involving rapid and comprehensive cuts in emissions and adaptation to the changes that are already happening around us – must occur simultaneously in many sectors and encompass energy systems, land use, urban planning and infrastructure, as well as industrial development.

The report also emphasizes that the whole natural world must become far more resilient to climate change. According to the report, this requires the protection of 30 to 50 percent of terrestrial, freshwater and marine areas. This protection must be implemented in a fair way, particularly in poor parts of the world. In addition, we must change fisheries management practices, by shifting the focus from maximizing long-term harvest to harvesting in a way that strengthens the resilience of species and ecosystems. Achieving this will require much fundamental research.

Challenges must be solved locally

The IPCC AR6 report emphasizes that the quicker we act, the greater will be the positive effects of our climate measures. Climate change affects the whole world, but challenges must be solved locally in a well-integrated global perspective. Norway is in a unique position, as it is shielded from many of the severe physical changes, such as extreme heatwaves and tropical storms. At the same time, Norway has vast economic resources that could be used to reduce vulnerability far beyond our borders. This is all about ethics, since our decisions also have implications for other parts of the world – and for future generations.

the warning lights are flashing red…

Let us take the warning of the UN Secretary-General António Guterres seriously: the second part of the Sixth Assessment Report shows with great clarity that the warning lights are flashing red – the whole climate system and the world need our immediate attention.

The Intergovernmental Panel on Climate Change (IPCC) was established in 1988 by the World Meteorological Organization (WMO) and the United Nations Environment Programme (UNEP) in order to summarize research-based knowledge on climate change. Reports from the IPCC represent the most important technical basis for the international climate negotiations held under the UN Framework Convention on Climate Change (UNFCCC). These negotiations are the so-called COP meetings, of which the most recent took place in Glasgow in November.