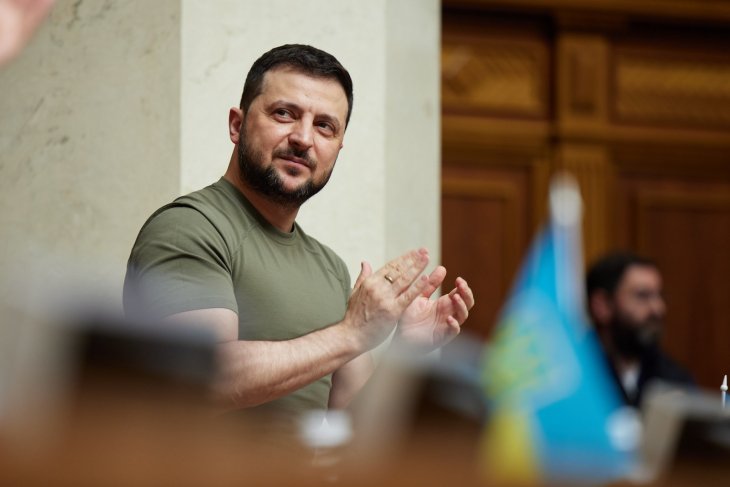 Volodymyr Zelenskyy in May 2022. Photo: President of Ukraina Office / Flickr

Volodymyr Zelenskyy, an actor and comedian turned politician and president of Ukraine, has astonished the world with his remarkable leadership since Russia invaded Ukraine on February 24, 2022. His popularity surged — based on our data, trust in Zelenskyy increased from 30 percent in December 2020 to over 80 percent in March 2022.Research on leadership shows that when citizens are confronted with war, they tend to value strong, dominant, authoritarian leadership more. But is Zelenskyy a dominant leader? And do Ukrainians prefer strong, dominant leaders in general? If so, should we worry that Ukraine will turn into an authoritarian regime centralizing power in the hands of a single, dominant individual?

We address these questions here using two waves of survey data collected in Ukraine in March and April 2022 by a local survey agency, Info Sapiens. Specifically, we investigate how preferences for ideal character traits in leaders are influenced by the current war. We also explore how such preferences are shaped by emotions.

In another study, people in the Netherlands who were asked to imagine that they elect a national leader when their country is at war voted for someone with a dominant-looking face. Similar patterns have been found in another study in Denmark.

However, these studies rely entirely on people imagining war and conflict, with most participants in the experiments having no direct experience with war. What kind of leader do people prefer when the war is real and the prospects for peace are bleak?

What Kind of Leader Do Ukrainians Want?

We fielded the first wave of our survey two weeks after Russia invaded Ukraine. Over 1,000 Ukrainians participated in the survey (many of them reported being attacked by the Russian forces; see our earlier blog post about attacks on Ukrainians and their willingness to resist). We asked half of them to pick their ideal leader in the current war and the other half to pick their ideal leader when thinking about a peaceful future. We asked, specifically, to report their preferences about leader dominance, competence, and warmth. Those asked to think about times of peace assigned less importance to dominance and wanted their leader to be competent and warm.

We also tracked changes in Ukrainian’s emotions between the two survey waves. Over this time, anxiety (feeling afraid, frightened, scared) and sadness (feeling sad, lonely, downhearted) decreased, whereas aggression (feeling angry and hostile) slightly increased, and self-confidence remained the same (feeling proud, strong, confident). Among the mix of emotions, aggression was the best predictor of the preference for a dominant leader, and this association was stronger among Ukrainian men than women.

Is Zelenskyy a Dominant Leader?

We also asked the participants to evaluate Zelenskyy’s character. They rated him as highly competent and highly warm, but only moderately dominant.

This hints at an interesting puzzle: If war increases preference for dominant leaders, and dominance is not Zelenskyy’s top trait, then why has he been so popular since the invasion? Perhaps Ukrainians see Zelenskyy as sufficiently dominant, having the right balance of leader traits for these extremely challenging times.

Over the last two decades, multiple European countries have become less democratic and more authoritarian, with prime examples being Poland and Hungary. What about future Ukraine? If the war continues, and preference for dominant leadership indeed increases during the times of war, one might ask whether Ukraine will also regress toward authoritarianism.

We see such a regress as not inevitable, for two reasons.

First, a belief exists that Eastern Europeans are predisposed to favour strong leaders—but this is largely a myth (for discussion, see this article). Research shows that preferences for authoritarian leaders increase across all cultures (not just in certain regions like Eastern Europe) in response to particular socioeconomic or political conditions or events, such as wars or economic crises.

The positive flipside is that under the right circumstances, people everywhere can turn to democracy. The huge support for Zelenskyy during this war, even though he is not seen as particularly dominant, shows that people value different traits in leaders even during a major crisis.

One more finding speaks against an authoritarian future for Ukraine. When imagining a peaceful future for their country, Ukrainians preferred a warmer, more competent leader over a dominant one. This aligns with existing work showing that warmth generally is the most valued quality in political leaders under normal conditions.

Moreover, psychological and anthropological research shows that resentment against authoritarian leadership is common in human societies, except temporarily in an acute crisis. So, when peace eventually returns, Ukrainians will most likely recalibrate their leadership preferences; then — as now — will likely value warmth and competence over dominance.

The current blog post is based on data that were collected as part of a larger project that interviewed Ukrainians over two survey waves (i.e., panel surveys). The first survey wave was conducted between March 9-12, 2022, and the second between April 3-11, 2022. Both waves were administered online in Ukrainian and Russian by a local survey agency Info Sapiens. The survey agency aimed to generate a representative sample of the Ukrainian population between 18 and 55 years old, in settlements with a minimum of 50,000 residents. However, some of the Ukrainians who were beyond Ukraine’s borders, or in areas of intense military combat, were not reached by the survey agency. A total of 1,081 people were interviewed in the first survey wave, and 811 were re-interviewed in the second wave. The first survey wave was supported by the Alexander-von-Humboldt prize to Mark van Vugt, and the second wave was supported by the Peace Research Institute Oslo (PRIO).