The relationship between memory and conflict is one of several themes highlighted by the NECORE project, and it has recently come into focus again in an emotional way, related to the tragic events of 22/7.

The bone of contention is the projected Utøya memorial. 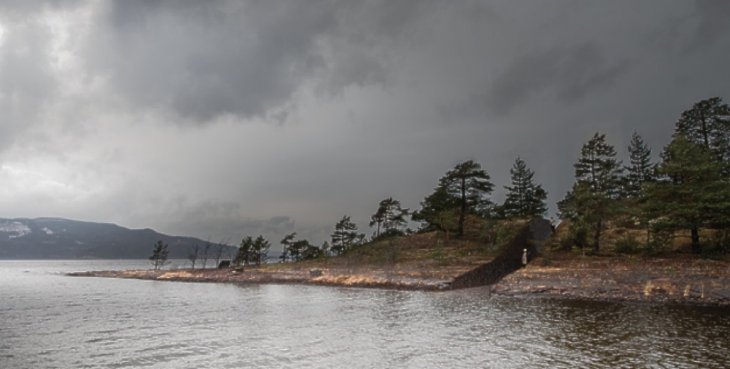 Where should such a memorial for the victims and events at Utøya be placed?
And how imposing should it be?

The residents of the local residential area reacted sharply against the original proposal.

Firstly, they said it would be a far-too-present, up-close reminder of an event they wanted gradually to put behind them.

And secondly, they felt that their voices and concerns had not been properly heard, since the initial part of the process had taken place without their active participation. This feeling of being left out remains a key point of tension between the local residents on the one hand and the Norwegian government, the official project owner, on the other. Because of this conflict, the residents have decided to go to court over the monument.

The drama is far from over, although many believe that the case is moving closer to being resolved. Some are hoping that this will happen without a court case, although that remains uncertain.

The Labor Party Youth Organization (AUF) has offered the quay where the ferries leave for Utøya – a fateful part of the 22/7 narrative and events, situated on AUF’s own property – as a site for the memorial, rather than the Sørbråten area, the more public and open spot from which several rescuers launched their mission to help fleeing youth. The monument will be less imposing at the quay. It is likely, if such a solution is chosen, that a different and less conspicuous monument than the one planned for Sørbråten will be chosen. This means that the memorial will not end up as close to where local residents spend much of their time, and where they regularly pass by, and that it will be less “ever-present”.

The dispute reminds us of the importance as well as the complexity of memory. Three points come to mind:

The debate about the Utøya memorial represents in many ways a question of whose memories should primarily be preserved.

Firstly, memories always have an agent – someone who remembers. The problem is that we remember things differently, depending on where we were and who we are, and we also take away different things and learn different lessons from historical memories. The debate about the Utøya memorial represents in many ways a question of whose memories should primarily be preserved.

It is my opinion that the direct victims of the attack as well as the next-of-kin are the main memory agents on behalf of whom – and for whom – such a monument is erected. That does not mean that others, including the bystanders and the many helpers, are at all irrelevant. But their concerns, while both relevant and important, have to take second place behind those to, for, and about whom this memorial primarily speaks.

Secondly, most memories – such as those about the 22/7 event – are geographically located. It is, therefore, important that physical memorials be tied to a relevant place, preferably a “historically correct spot”, meaning one of the places where the event or events actually took place.

Why is this important? For one thing, one wants to preserve the historicity of the event: that it is re-told rightly, and in a way that does not easily become victim to revisionist history or accusations of lying. Also, such a memorial fills the role of a gathering spot, a sacred ground. It goes without saying that such spots cannot be erected just anywhere.

Sanitizing the past and hiding the disruptive memories, amounts to a lie

Finally, memories of crises and death are painful. There is no way around that. No matter how much we want to put the pain behind us, our potential for honoring the dead and learning from history is so much greater when memories are re-told rightly and honestly. Will that mean that some people will have painful memories imposed on them? Yes, indeed. This is true of the neighbors of Treblinka, Sachsenhausen, and Auschwitz, as well. But the alternative, sanitizing the past and hiding the disruptive memories, amounts to a lie. It is true that the memorial will be a burden for those living there. But the mere fact that we need this memorial is essentially a burden for all, and not least for those whose lives were most directly affected.

Any process that properly takes into account the feelings and opinions of the local population at Utøya should be encouraged and supported. Hopefully, we are closer to that now than what we have been. Not everyone will be happy with the outcome. But we can make sure that everyone feels that it represents the truth. This is after all not a memorial that celebrates happiness. It is a memory that reminds us of the truth of death and hatred. It should do so, however, while also honoring the joyful happiness that was taken away on that fateful day in July 2011, and while celebrating the ideas and forces that can prevent such a tragedy from happening again.