Da’esh has stunned the world with its gross human rights abuses, gendered violence, and practices of sexual slavery, and yet, the organization has attracted a large amount of female recruits. Women who have joined Da’esh have been met with a storm of disbelief and gendered commentary, and have even been designated their own term – ‘jihadi brides’. 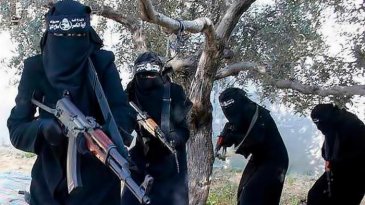 A screen shot of an Islamic State propaganda showing the Al-Khansa, an all-female police squad.

A recent policy brief explores agency and women in Da’esh: why women join, their roles, and how women are treated if they return to the West. The brief illuminates how gendered understandings of Western female foreign fighters are affecting judicial processes and potentially creating gaps in our security structure.

Read more in the recent Policy Brief from PRIO Centre on Gender, Peace and Security.