Despite major strides, women in many countries continue to face huge constraints in personal security, social and political inclusion, and legal protections that harm their wellbeing and hold back economies.

Several global indices endeavor to capture women’s status in countries around the world, distilling an array of complex information about their lives into a single number. However, most are limited to indicators of inclusion, such as whether women complete secondary school or are represented in parliament or paid work. These aspects of inclusion are important, but incomplete in the absence of aspects of justice and security. For example, to get a full measure of a girl’s well being, data on schooling alone is insufficient, if she is not safe in her community.

Georgetown University’s Institute for Women, Peace and Security and the Peace Research Institute Oslo (PRIO) have taken a new approach to measuring women’s wellbeing. Recent research has shown how this “scorecard diplomacy” can be a powerful agent for change. Highly comparative and easy to understand numbers call out low performers and help to reinforce good performance.

The new index on Women, Peace and Security has drawn on recognized international data sources to rank 153 countries on the status of women’s inclusion, justice—and security. The Index includes intimate partner violence, the most common form of violence experienced by women globally, in both conflict and non-conflict settings. The Index also captures safety in one’s community, which is another basic indicator of security. Security at the national level is included through existing battle-death data for organized violence from the Uppsala Conflict Data Program.

The Index reflects a shared vision that countries are more peaceful and prosperous when women are accorded full and equal rights and opportunity.

What does the WPS Index tell us? The results reveal extensive unevenness in performance around the world – only about 30 countries score in the top third for inclusion, justice, and security metrics.

The United States, for example, ranks 22 overall and is on par with other countries in the top tercile on inclusion and justice metrics. Yet the US ranks 66th on the security dimension — depressing its overall score — due primarily to rates of intimate partner violence that are more than 10 percentage points above the mean for developed countries.

US society faces a serious crisis of violence against women. The risk of homicide for women in a domestic violence situation increases five-fold when a gun is present (Everytown for Gun Safety 2014).

Iceland leads the world in this first edition of the WPS Index, which covers more than 98% of the world’s population, while war-torn Afghanistan and Syria are tied for last place. 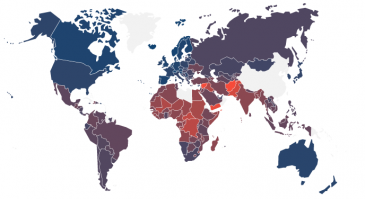 The findings also show that while money matters, many countries do far better on the WPS Index—or far worse—than their per capita income rank. Saudi Arabia drops 89 places on the WPS Index relative to its income ranking and Iran drops 57 places.

While there are clear regional patterns in performance, there are also major differences among countries within each region, illustrating that improvements are feasible in order to reach the standards of neighbors.

The index results reveal the potential for improvements, as well as more generalized deficits that require attention.

“I firmly believe that data not only measures progress, it inspires it,” said Hillary Rodham Clinton, who serves as the Honorary Founding Chair of the Georgetown Institute for Women, Peace and Security. “That’s why I welcome this new global index on women, peace, and security as an important tool to shine a light on key achievements, as well as the work that remains to confront the violence, injustice, and exclusion that still hold back too many women and girls around the world.”