The recent #MeToo campaign was a watershed moment that has brought global attention to the issue of violence against women and has shown us how women continue to be objects of exploitation. 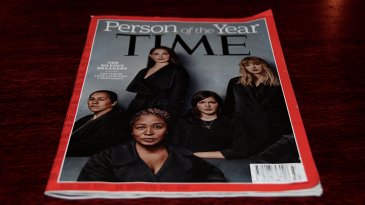 Time Magazine names ‘The Silence Breakers’ 2017 person of the year

Violence is manifested in so many different ways, from intimate partner violence, domestic violence, rape, honour killing to dowry and to sexual harassment and exploitation – the topic at the centre of this campaign.

The #MeToo campaign has taken us toward reducing the stigma of sexual violence survivors, which exists in all corners of the world and to addressing the impunity of perpetrators. But what it has also done is to forcefully spotlight attention on gender issues.

On this International Women’s Day as we reflect on gender issues, women’s rights and equal access to opportunities we must not only reflect on the progress that has been made but also on how much more needs to be done and how to achieve gender equality in societal life and in all sectors.

It has been more than 17 years since the international community passed the first landmark resolution on Women, Peace and Security (WPS), which came to be known as the United Nations Security Council Resolution (SCR) 1325.

One of the most important outcomes of this and subsequent resolutions has been the growing global recognition and increased understanding of the different ways in which conflict affects women and men, their potential to build recovery and peace and how they can complement each other in peacebuilding efforts. In addition, these resolutions spotlighted attention on women as multi-faceted actors in conflict and post-conflict situations, while promoting women’s participation at all stages.

Peacebuilding efforts however continue to ignore the potential role of women even though past experiences have shown that the real sustainability of interventions is heavily dependent on the equal involvement of women alongside men. For example, earlier empirical studies and analysis of peace processes have revealed that peace agreements reached with strong involvement of women have a higher probability of lasting longer. Despite this, there is still an alarming lack of female participation in formal peace processes around the world. Although women have participated in peacebuilding, their role is often at an informal level and rarely visible to formal peacemakers (UN Women 2015c).

Women’s effective participation in conflict prevention and peacebuilding is also at the heart of the 2030 Agenda and the Sustainable Development Goals (SDGs) and in particular Goal 16 on building peaceful, just and inclusive societies. SDG 16 reinforces this importance of participation. In particular target 16.7, calls for “responsive, inclusive, participatory and representative decision-making at all levels.”

It goes some way to addressing the participation pillar of the WPS agenda. The indicators for that target count positions held in public institutions, disaggregated by age, sex, disability and population group; as well as perceptions of inclusive decision making. However, it doesn’t count participation in security institutions such as the police and the military, and data on this remains difficult to attain.

across all regions, women’s representation falls greatly behind the global 30 percent target established in the Beijing Platform for Action

Women’s employment in the public administration remains also highly variable – from 15 percent in some countries to over 70 percent in others. More revealing and consistent, however, is women’s representation in decision-making positions – across all regions, women’s representation falls greatly behind the global 30 percent target established in the Beijing Platform for Action. Preliminary data shows that less than 10 percent of countries have reached gender parity in decision-making positions of the public administration. In four out of five conflict-affected countries studied, women held 18 percent or less of the decision-making roles (UNDP GEPA). The global average of women in parliament remains below 25 percent (as of June 2016) and women comprise only 18.3 percent of government ministers (as of January 2017). Women’s political participation is nowhere near where it needs to be. Hence a lot more needs to be done.

In many developing countries, women are denied equal access to resources, rights and services, including basic healthcare, education and justice. The UN World Food Programme estimated that 60 percent of chronically hungry people are women and girls. Also, UN Women reveals that while women make up about 43 percent of the agricultural labour force in developing countries they constitute less than 20 percent of the world’s landholders. Of this, women represent fewer than 5 percent of all agricultural landholders in North Africa and West Asia, while in sub-Saharan Africa they make up an average of 15 percent.

In societies affected by violence, women and girls are often the most vulnerable. While conflict affects all sections of society including men and children, women in particular are at risk of violence (including sexual), forced displacement, trafficking and conscription into combatant roles. Interestingly, even in the face of this dismal reality, conflict affected contexts can open up spaces for women’s empowerment.

Recognising that we need to understand better what works in this field, UNDP’s Oslo Governance Centre (OGC) and the Peace Research Institute Oslo (PRIO) are currently hosting a Fellowship Programme for highly experienced gender and peacebuilding practitioners. The Fellows are engaging with the Oslo based research community to better understand complex gender and peacebuilding related issues and contributing field perspectives to research.

This article originally appeared in Dagsavisen. You can read it in Norwegian here.

I believe we are looking at this whole scenario from a completely wrong perspective ( for the lack of better word..). The part of the world that is busy making weapons and then has the need to create a battlefield in order to test their weapons in actual warfare and then passes a resolution 1325 by which creates more divide between men and women in these parts of the world and then wants to implement 1325 by creating gender equality while the whole time not knowing from where to start and where to end it, in my mind is not a solution and will never be. We need inclusion and by that I mean of men and women together at the same table, putting everything on the table, discussing maybe coming up with simple examples pertaining to both women and men’s lives, talking about how they got there in the first place, very honest and very open, what are their shared heartaches, their needs and fears. I know it sounds very simplistic, but maybe it’s time to give it a try. As for a lasting result, we need to start working with young boys and girls at the village level.