Donald Trump is the unknown factor in the South Korean president’s peace diplomacy. 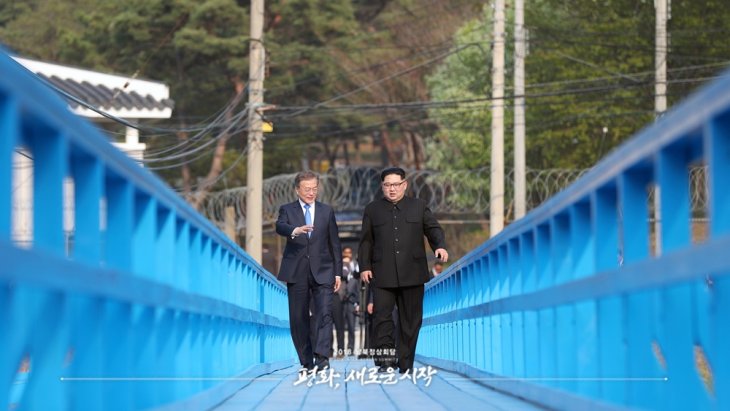 President Moon and Chairman Kim share conversation during the walk on the Footbridge (Dobodari) on April 27. Official photo / Korea.net

Friday 27 April 2018 was a new historic day for Korea. Even before he had completed the first year of his five-year term as president of South Korea, the 65-year-old human rights lawyer Moon Jae-in succeeded in holding a summit with the young North Korean dictator Kim Jong-un. During their meeting in the “Peace House” in the demilitarized zone between North and South Korea, Kim promised that Moon would no longer have his sleep disturbed by nuclear weapons tests and missile tests.

According to Kim, the meeting would usher in a peaceful era. The two leaders issued a declaration with the same objectives that several of their predecessors had agreed on: a commitment to achieving a nuclear-free, peaceful, and reunified Korea. They also decided to hold bilateral military talks to remove the risk of armed confrontation. They wanted to have more contact at many levels. And they agreed to meet again in the autumn.

Last year, Kim cold-shouldered Moon’s advances concerning peace. He ignored an invitation to participate at the Winter Olympics. First Kim wanted to complete his show of strength. He detonated a hydrogen bomb on 3 September and launched an intercontinental missile into space on 28 November. It attained such a high altitude that it could have reached any part of the continental United States if it had been launched at a standard trajectory.

The reversal came in Kim’s New Year speech on 1 January. He announced that he was accepting Moon’s invitation. North Korean athletes participated in the Winter Olympics, and high-level representatives of North Korea, including Kim’s own sister, met Moon Jae-in and his advisers. They agreed to hold a summit, which took place on 27 April.

This was the fifth time that North and South Korea have approached each other and agreed to work towards a peace settlement and national reunification. The first four attempts failed. Could the fifth succeed?

The first attempt was made in 1972

The first attempt was made in 1972. The dictators Park Chung-hee and Kim Il-sung feared betrayal by their respective allies when the then-president of the United States, Richard Nixon, travelled to China to visit Mao Zedong. Park and Kim made contact with each other with the help of the heads of their intelligence services. They did not meet in person, but on 4 July 1972 they issued a Joint Communiqué on three principles for reunification: no foreign interference; no use of force; and no preventing of the unity of the Korean people through ideological differences. The two dictators also established a hotline between themselves.

The communiqué had little effect. In August 1974, Kim most likely stood behind an attempt to assassinate Park.

The second attempt was made in 1991-92.The Cold War had ended

The second attempt was made in 1991-92. The Cold War had ended. China and the Soviet Union established diplomatic relations with South Korea and each Korean state became a member of the United Nations. President George H. W. Bush unilaterally withdrew all U.S. tactical nuclear weapons deployed abroad, including from South Korea. South Korean president Roh Tae-woo (1998-93) launched a Nordpolitik aimed at forming a joint “Korean community”. A new common flag was used when a unified Korean table tennis team competed at the World Table Tennis Championships in Japan. High-level talks were conducted in Seoul between the two Korean states and resulted in a 20 January 1992 agreement on reconciliation, non-aggression, cultural exchange, and a joint obligation to denuclearize the Korean peninsula.

In 1993, the rapprochement ended in an acute crisis when the world discovered that North Korea had a secret nuclear weapons programme, and North Korea announced its imminent withdrawal from the Non Proliferation Treaty (NPT).

The third attempt came in 2000

The third attempt came in 2000. In 1997, Kim Dae-jung was elected president of South Korea on a manifesto that included a “sunshine policy” towards North Korea. A South Korean sun was to emit so much warmth to North Korea that the latter would want to take off its heavy, military overcoats. In June 1999, however, a naval skirmish occurred close to the Northern Limit Line in the sea between the two Koreas, so it was not until June 2000 that Kim Dae-jung managed to meet Kim Jong-il in Pyongyang – with the help of huge bribes.

The intention was that the American president, Bill Clinton, would also visit Pyongyang before stepping down in January 2001. That plan had to be abandoned when George W. Bush was elected president of the United States, instead of Clinton’s preferred successor Al Gore. Even so, the sunshine policy bore results: the reunification of families split by the Korean War; a joint Korean team at the Sydney Olympics; an industrial zone in North Korea funded by South Korean investments; and a tourist zone.

But in 2002, the sunshine policy received a blow from across the Pacific when President Bush declared that North Korea was a member of “the Axis of Evil”, along with Iraq and Iran.

The fourth attempt was made in 2007

The fourth attempt was made in 2007. Kim Dae-jung’s successor, Roh Moo-hyun (2003–07), attempted to continue the sunshine policy. China hosted the so-called six-party talks (between China, the United States, Russia, Japan, North Korea and South Korea), but the agreements made were not adhered to.

In 2006, North Korea conducted its first nuclear test. Then, in 2007, during a brief period when it seemed that things might go better, President Roh held a summit with Kim Jong-il in Pyongyang. This had no lasting effect. Soon afterwards, the South Koreans elected the conservative Lee Myung-bak as president (2008–12). Under Lee and his conservative successor, Park Geun-hye (2013–16), there were serious armed clashes between the North and South and all the achievements of the sunshine policy were abandoned. Once again, North Korea became a pariah state.

When Kim Jong-un took over as leader of North Korea after his father’s death in 2011, he massively stepped up North Korea’s nuclear programme, with many, frequent tests.

Moon Jae-in has some advantages over his predecessors as South Korean president:

In contrast to his predecessors, Moon Jae-in has succeeded in coordinating his peace efforts with the United States. This has not been easy. President Trump has created uncertainty by threatening war, by insulting Kim Jong-un, by accusing Moon Jae-in of appeasement, by demanding changes in the bilateral trade agreement between South Korea and the United States, and by sowing doubt on whether or not the United States will continue to base soldiers in South Korea. Trump has still not appointed an ambassador to Seoul. He mocked his former Secretary of State, Rex Tillerson, when Tillerson attempted to negotiate with North Korea. A chaotic White House and a deeply frustrated State Department, now led by former CIA Director Mike Pompeo, have had little chance to prepare for Trump’s upcoming summit with Kim, and may therefore have to rely on South Korean advice and support.

Moon Jae-in’s handling of Trump has been exemplary. He has praised, and never criticized, the self-obsessed president, and seems to have formed good personal chemistry with him.

What will happen if Trump, as planned, meets Kim this May or in June? The meeting will be a result of Moon’s initiative. After the Winter Olympics, he sent a delegation to Pyongyang. Kim informed them that he could be willing to meet Trump. The delegation travelled on to Washington and relayed this willingness to Trump. On the spur of the moment, Trump announced that he wanted to meet Kim soon.

Kim then suddenly secured an agreement to have an unofficial meeting with the Chinese president, Xi Jinping. Until then, relations between China and North Korea had been glacial. Kim Jong-un had still not met a single foreign head of state when he boarded a special train to Beijing. Now he got to meet the “Chinese Emperor” himself. They exchanged gifts, as has happened so many times before in East Asian history, and Kim gained Xi’s blessing as leader of North Korea. Inadvertently, Trump thus ensured Chinese support for Kim.

The young Kim Jong-un has cast himself into an intricate game of foreign policy, aimed at getting out of his isolation and become a fully recognized member of the international society. In this break-out attempt we can say that he is facing a good cop (Moon Jae-in), who is promising him cooperation and friendship if only he will give up his weapons; a bad cop (Xi Jinping), who will refuse him money, food and oil if he refuses to give up his weapons; and a very bad cop (Donald Trump), who is threatening to kill him if he refuses to give up his weapons. Now Kim has met two of them, and is preparing to meet the third, and the most dangerous.

Kim’s goal must be to reduce the risk of an American attack and to get China to lessen its economic sanctions, preferably without having to give up (all) his weapons. If Trump insists that Kim has to give up all his nuclear weapons immediately, Kim will refuse and the meeting with Trump will be a fiasco.

Moon Jae-in will probably try to persuade the United States to enter into an agreement with North Korea on gradual or incremental denuclearization. If Trump agrees to this, the peace diplomacy can continue, although there will be a risk that North Korea finds a pretext to keep its nuclear arsenal all the same. If Trump ignores Moon’s advice and makes impossible demands of Kim, so that the summit collapses, a crisis may ensue in the alliance between the United States and South Korea, which could also lead to an internal political crisis in South Korea. It will be difficult for Trump to use military force against North Korea if its South Korean ally does not agree.

No doubt Kim Jong-un is well aware of Trump’s weakness on this point, so when he cultivates contacts with Moon, part of his strategy is to reduce the risk of an American attack. If Trump fails to achieve an agreement, but even so cannot attack North Korea because of the opposition of good cop Moon Jae-in, then very bad cop Trump will need help from bad cop China to maintain and sharpen sanctions against North Korea. This would certainly have a price. Trump cannot have China’s support against North Korea while at the same time conducting a trade war against China.

The world will hold its breath when Kim meets Trump

The world will hold its breath when Kim meets Trump. If things go well, and the meeting ends with the announcement of an agreement to conduct a phased and fully verifiable dismantling of North Korea’s nuclear weapons, in return for a step-by-step lessening of international sanctions, then there may be room and time for South and North Korea to proceed with their sunshine policy: establish cooperation in all economic, social and cultural fields, remove offensive weapons, develop a peace treaty to be signed by all the parties to the Korean War, and even plan for re-unification.

there is only one person whose overarching goal is peace: Moon Jae-in

Since the 1980s, the East Asian region (Northeast as well as Southeast) has been remarkably peaceful with no wars between states and fewer and less intense civil wars. This has allowed East Asia to experience an astounding economic development, with substantially increased life expectancy in every single regional country. So far, North Korea has not been part of the regional peace trend. If the Korean crisis of 2017 gives way to an era of long-term rapprochement on the Korean peninsula, then this will be a substantial contribution to preserving East Asia’s developmental peace. In the game we are witnessing, however, there is only one person whose overarching goal is peace: Moon Jae-in. The fact that the South Korean people have elected a president like him, is one of the few beacons of hope in today’s world.