Two statisticians at the University of Oslo have blown a hole in Steven Pinker’s famous theory that the Long Peace dates from 1945 onwards. But Pinker is excited about the new calculations, which suggest that this more peaceful period instead began in 1965 – during the Vietnam War. 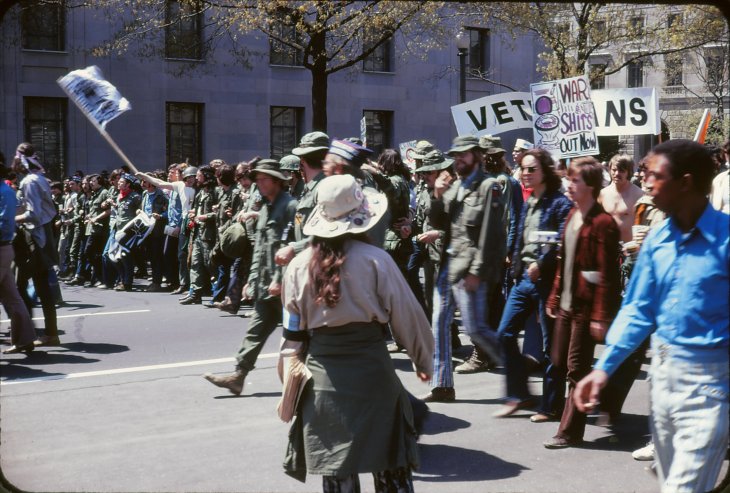 Washington 1971: The demonstrations against the Vietnam war may have made it more difficult to go to war. Foto: Leena A. Krohn / Wikimedia Commons / CC BY-SA 3.0

In his 2011 book, The Better Angels of Our Nature, the internationally famous psychologist and popular-science author Steven Pinker looks at history over several millennia and observes that the world has become gradually more peaceful. He has also described the period since World War II as “the Long Peace”, due to the decline in the number of interstate wars. But now Pinker seems to be having second thoughts, after reading a blog post written on January 15 by Professor Nils Lid Hjort of the Department of Mathematics at the University of Oslo (UiO), following a seminar at the Peace Research Institute Oslo (PRIO).

Céline Cunen, a PhD candidate at the Department of Mathematics, was responsible for some of the analytical work that forms the basis for Hjort’s blog post. But neither Cunen nor Hjort could have anticipated Pinker’s reaction: he was very excited about the blog and posted a brief tweet – to his 367,000-plus Twitter followers – praising the new analysis. He also sent an email describing the two researchers’ analysis as “fascinating and sophisticated” and their message as “beautifully presented”.

Steven Pinker thinks that it is interesting to consider 1965 as a possible starting point for the historical change he has identified, which has led to a reduction in the number of people killed in interstate wars.

Pinker’s 2011 book is about much more than just the period since World War II. He argues that there has been a continuous decline in the relative levels of virtually all types of violence, and he writes of a “humanitarian revolution”, driven by democracy, trade and information.

Professor Michael Spagat, a British economist who has published a number of scholarly articles on armed conflict and who authors the blog War, Numbers and Human Losses, is also very enthusiastic. “That’s such a good article. Really informative and spectacularly well written,” wrote Spagat in an email to his contacts at PRIO.

As well as the scholarly content of Hjort’s blog, both Pinker and Spagat are enthusiastic about the way it is presented, putting heavyweight academic argument alongside references from popular culture. Indeed, the very first link in the list of references takes one to YouTube and a recording by “Boys, B.”, which presents the highly relevant message “Wouldn’t it be nice if”.

Both Cunen and Hjort are flattered, and even a little starstruck, by this overwhelming international attention, and they are already at work on a paper for formal publication. But – what is it they’ve actually done?

“It began when one of Steven Pinker’s leading critics, the computer scientist Aaron Clauset from the University of Colorado in the United States, was due to visit Oslo to give a lecture at a seminar organized by PRIO and UiO,” explains Professor Hjort. “The two institutions had recently embarked on a partnership with the goal – as stated in the letter of intent – of furthering Oslo’s role as a global knowledge centre for the prevention and resolution of armed conflict.

Aaron Clauset has analyzed data concerning all interstate wars from around 1820 until today, and has concluded that the Long Peace has not endured long enough to be considered permanent. According to Clausen, this peaceful period needs to last perhaps another 100 or 150 years before it is possible to say that the world has undergone lasting change.

The clearest change is in 1965

Hjort’s original plan was for his lecture at the seminar to be of a rather general nature. He wanted to comment on various aspects of Clauset’s analysis and criticism of Pinker’s work, but without “getting into the data”. Nevertheless, some days before the seminar, he looked at the data and existing models and realized that there might be more to uncover.

He spoke to several of his PhD students, especially Céline Cunen, about the topic and the more detailed analysis. Cunen had previously used statistical methods to investigate several historical topics, including a comparison of the Wars of the Roses and the TV series Game of Thrones. In addition, Cunen and Hjort have developed a particular method for running a change-point analysis. In this they have been assisted by Gudmund Hermansen, one of Hjort’s postdoctoral fellows.

“I offered immediately to do this change-point analysis,” explains Cunen. “We got hold of PRIO’s data for all major interstate wars from 1823 until today. We saw fairly quickly that the clearest change-point occurred in 1965. The number of people killed in interstate wars is lower after 1965 than before 1965.”

The next thing that happened was that Hjort presented the new finding during the seminar on 11 January, and the on-the-spot feedback was so positive that he wrote a blog post. He then showed his post to Håvard Mokleiv Nygård, a senior researcher at PRIO who is also involved in the partnership with UiO. Nygård in turn alerted Nils Petter Gleditsch, a very senior figure at PRIO. Gleditsch immediately sent an email to Steven Pinker, with whom he is well acquainted.

“After that it wasn’t more than an hour-and-a-half before Pinker tweeted his complimentary comments about us,” says Hjort.

Cunen emphasizes that the change-point in 1965 is not so clear that it is “bomb-proof”, because what statisticians call the confidence level – the margin of error – is a shade too large. But it is undoubtedly the clearest change point that it is possible to find in the existing data.

“Aaron Clausen has also been interested in change-point analyses, but he has investigated only whether there is a change-point in 1945. He did not find any significant change there,” adds Cunen.

“We must clarify that both Steven Pinker’s theory about the Long Peace and our analysis are limited to interstate wars. In other words, other types of conflict, for example civil wars, are excluded. We have also focused our attention on wars above a certain size, because interstate wars follow what is called the Pareto principle (this concept is explained in a Titan article about the Long Peace [in Norwegian]). Accordingly, this analysis covers the 51 biggest wars from 1823 to 2003,” explains Hjort.
“Our analysis concludes in 2003 because PRIO has not registered any conflicts that satisfy PRIO’s definition of an interstate war after that date. The wars in Syria and Lebanon are defined instead as internal conflicts, that have escalated when one or more external states have got involved,” adds Cunen.

The world changed during the Vietnam War

Hjort and Cunen as mathematicians and statisticians are slightly cautious about straying into the field of social sciences, but they both think it is interesting to note that the clearest change-point occurs precisely in 1965. At that time the United States was waging a full-scale war in Vietnam, which became the first “TV war”, with gruesome pictures of warfare being transmitted to TV screens in millions of homes.

“This was also at the same time that the so-called Flower Power movement was born, with peace activists and radical movements gaining increased support due to the Vietnam War. It’s possible to think that it became more difficult, at least for the Americans and their allies, to start an interstate war afterwards,” says Hjort.

Håvard Mokleiv Nygård, a senior researcher at PRIO, also thinks that the two statisticians have discovered something very interesting.

“In addition to being a very sophisticated analysis, this also brings to light a very plausible change-point. It is correct that the Vietnam War was the first TV war, and this absolutely may have changed ‘public opinion’ in a way that has made it more difficult to go to war afterwards. In any case, the most interesting thing now will be to see how robust these results are when Nils and Céline explore them in greater depth in a scholarly paper. And then it will be especially interesting, from a social-sciences perspective, to start work on explaining and understanding exactly what underlies this change point,” says Nygård.

Hjort and Cunen have not yet received any criticisms of their new finding, but do not discount the likelihood that some will emerge.

“We know at least that certain historians are opposed to making statistical analyses of this research,” says Hjort.

“Some historians may think that all conflicts are unique and so it is pointless to analyze and “statistificate”past conflicts in order to make predictions about the future. But our response is that we are statisticians, and we have nothing against using data for these kinds of analysis,” says Hjort with a smile.

Cunen and Hjort, together with Gudmund Hermansen, have previously used change-point analyses on such diverse datasets as snow levels at Bjørnholt in the forest outside Oslo (a long-term decline in skiing conditions, probably due to climate change) and the literary style of the mediaeval novel Tirant Lo Blanch, which dates from the 1460s. This work is considered the world’s first novel, written 150 years before Don Quixote, but literary scholars have been frustrated because the author, Joanot Martorell, died long before the book was completed. After Martorell’s death, the book was completed by Martí Joan de Galba – but when did the transition occur?

“We analyzed sentence lengths and the proportion of words of different lengths and so on. The book has 487 chapters, and our analysis strongly indicated a change in style at around chapter 371. The reasonable explanation for this is that the style changed because a new author took over. This just goes to show that statistical methods can be used on a lot of interesting topics,” explains Cunen.

This article was published in Norwegian in Titan 30 January 2018: ‘Mest sannsynlig at Den lange freden begynte under Vietnamkrigen‘