The Norwegian Labour and Welfare Service, NAV, has been simultaneously complying with and breaking EEA rules. During 2015 and 2016, I gained detailed insight into how individual bureaucrats were handling exports of sickness benefits. I also heard stories about rules being applied inconsistently. 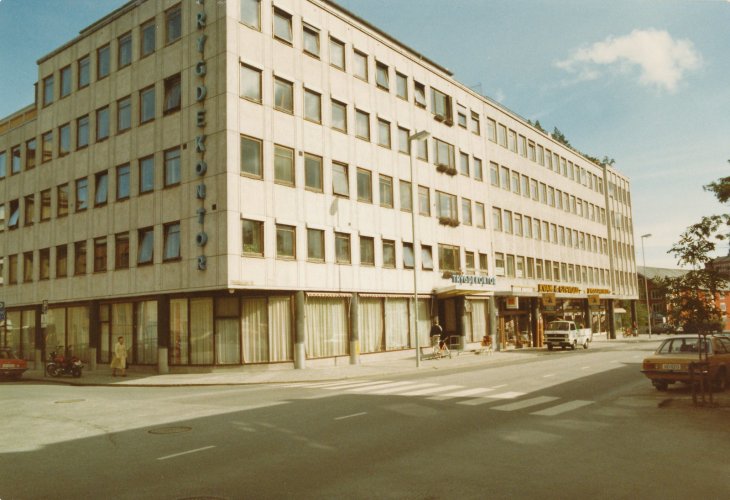 Trygdekontor in 1980 (the former name of NAV). Photo: Municipal Archives of Trondheim

A major social security scandal is currently unfolding in Norway. It is primarily a tragedy for the people who are affected, but also for the trust-based Norwegian welfare system. There are clear signs of a systemic failure, and many people are asking: How could this happen?

I’ve spent the past four years researching how NAV deals with users who live in more than one country. These users – known in the jargon as ‘transnationals’ – include people who export benefits out of Norway, as is the case with the victims of the social security scandal.

Following hours of conversations with case handlers working throughout what is known in NAV as the “international branch”, the scandal that is currently unfolding comes as no surprise.

I could not have envisaged the scale of the problem, but the fact that defects in the system resulted in inconsistent, unsatisfactory and erroneous case-handling corresponds well with my impression of the state of affairs.

In my experience, a particularly hard-pressed group of bureaucrats has primary responsibility for handling cases involving transnational users and exports of benefits. Norway’s welfare system was not designed to deal with people who live across national borders, and the case handlers come up against the consequences of this in their work.

Given the intricacy of the regulations governing different types of benefits, together with the complexity of the individual cases – in which several countries’ regulations and practices may come into play – the case handlers are often navigating difficult terrain between  national and international rules.

For 70 years, most cases with an international aspect have been processed by a special unit within the social security system. What in 1947 was the “Insurance Fund for Seamen Abroad”, became the “National Insurance Office for Social Insurance Abroad”, then “NAV Abroad”, and is now known to its users as “NAV International”.

For a long time, this was a kind of local office for users who were living abroad, or who wanted to take their benefits with them out of Norway. Increased immigration, emigration, the expansion of the EU, and easier and cheaper travel have brought about a situation where more and more people are able to live their lives in several countries simultaneously. This has put greater pressure on the special international unit, although this added pressure has not been reflected in any increase in the unit’s resources.

Lack of resources and low prioritization may be significant underlying causes of the scandal that is now unfolding.

Caseloads have increased repeatedly, for example when the EEA Agreement came into effect in 1994, and when new countries joined the EU in 2004 and 2007. Despite these increasing demands, it seems that the necessary resources have seldom been put in place. No additional resources were made available in the 1990s, the 2000s or in more recent years. Only when statistics for unprocessed cases reached alarming levels has the foreign section been granted resources and extra staff.

The Directorate of Labour and Welfare continues to be slow to respond. It is true that there was greater focus on these cases after the Office of the Auditor General intervened several times in the 2000s. Even so, the area still was not given particularly high priority.

For many years NAV’s international bureaucracy has performed more poorly than the domestic system, and recently this led to the closure of NAV International. In my opinion, lack of resources and low prioritization may be significant underlying causes of the scandal that is now unfolding.

Higher staffing levels over the long-term would have given NAV International the chance to improve its expertise. This would have allowed the blurred interfaces between different offices to have been clarified, and efforts could have been made to deal with the uncertainty surrounding the application of conflicting regulations.

This could have allowed the unit to function better as an expert body, not least to advise local NAV offices that also – albeit more rarely – handle cases with international aspects. NAV has case handlers working all over Norway, and many do not have a good working knowledge of how to apply international rules – for example those of the EEA Agreement.

A case that goes deeper

Accordingly, my impression is that the roots of this situation go deeper than a problem with poor communication between NAV, the courts and the ministry in the period between 2017 and 2019.

It is a fact that many people have been wrongly convicted for taking cash benefits abroad since 2012, but something that has not been discussed until now is that in this same period, many people have gained official approval for exports of the same benefits. This is clearly apparent in NAV’s statistics for payments to foreign countries.

In the years 2015–2016, I gained detailed insight into how individual bureaucrats processed and approved exports of sickness benefits for Norwegians and other EEA citizens. I rapidly gained an understanding of how difficult these assessments were. I also heard stories about how different practices were being implemented simultaneously.

While the special unit for sickness benefits in NAV International handled these cases in accordance with the EEA Agreement, they constantly received enquiries from local offices that had rejected similar claims on the basis of Norway’s National Insurance Act. These rejections were due to ignorance in NAV’s national offices.

Apparently, several offices also failed to conduct membership assessments, which are an important step in the case-handling procedure. Part of these assessments involves determining which country’s social security rules apply in each individual case.

In principle, anyone who has lived abroad in the past should be assessed to determine whether they are still members of Norway’s national insurance system. Because there is no register of members, every case must be processed individually.

Google Translate has sometimes been used to translate foreign documents when the necessary, and legally required, language resources have not been available.

This was standard procedure in NAV International, but it was not something that all local offices either did or realized that they needed to do. In other words, claims were assessed inconsistently, sometimes correctly and sometimes not. And this was an obvious problem that many people spoke openly about – even before the judgments in 2017.

Moreover, this is just one of several possible consequences of the way that international cases have fallen between the cracks in NAV. I have also seen how insecure software dating from the 1980s is still being used to a significant extent in some cases, and I have heard about difficult decisions being made in cases where sick notes and other documents from abroad have to be assessed, often without clear guidelines as to how to do this. In fact, Google Translate has sometimes been used to translate foreign documents when the necessary, and legally required, language resources have not been available.

People are quick to cast blame in a situation like this. Up to now, many people have pointed to the case handlers, NAV, the legal profession, the courts, the Labour and Welfare Directorate and the Office of the Auditor General as possible scapegoats. What such a list does not make apparent is the political backdrop.

In recent years, few political parties have been interested in getting involved in exports of social security benefits. In any event, few politicians have spoken on behalf of the whole diverse group of people who export benefits, including foreign workers, other immigrants and the recipients of 60 percent of social security exports – namely, Norwegians living abroad.

Moreover, the amounts sent out of Norway are relatively small. In 2018, only 1.7 percent of social security payments went to users abroad. Even so, the subject is a political minefield.

And if anyone should be seen as the least to blame for this situation, in my opinion it’s the case handlers in NAV. In the research project I described above, we have found that many bureaucrats, particularly those with specialist expertise, have gone out of their way to find satisfactory solutions and ensure that transnational users get what they are entitled to – including under the EEA Agreement.

These bureaucrats are part of a system that has failed, but they are simply the final link in a chain of actors that could have taken action much earlier, by focusing on the institutional challenges of cases with an international aspect.

An excellent article. However, on a more sinister note, one needs to ask why Norway (Toll og Avgifts Direktoratet) declared as resident in Norway “for tax purposes” (and thus forced by Skatteetaten to pay Trygdeavgift) EU citizens which were then denied residence permits (by UDI)? Without a residence permit, the EU citizen would not be able to a. live legally in Norway or b. be registered as living in Norway. On the grounds they were not registered as living in Norway these EU citizens were denied benefits (by NAV) including free healthcare (by HELFO) finding themselves summoned to court by debt collectors to recover the value of invoices they had received for the value of emergency medical care. The logical consequences of such procedures if the EU citizen falls into destitution finding they are not entitled to benefits anywhere. This is, of course (amongst other articles of the ECHR), a failure by Norway to uphold Article 1 Protocol 1 of the European Convention of Human Rights in conjunction with Article 14. The NAVSkandalen is all the more remarkable in that the Stig Arne Jonsson case (2013) and case law from gaygusuz vs Austrian 1996 has not resulted in changes to Norwegian law. The EU citizens defined by Norway as resident in Norway for tax purposes ONLY also cease to be able to define where they live for the purposes of producing accounts, applying for work permits needed to accept offers of work outside of the EOS/EEA or settle outside of their native land. That Norway does not consult with individuals or consider the implications of forcing them to be tax liable to a nation whose language they don’t speak, where they have no address or permission to “live” is likely abusive. I foresee EU and human rights law seeking to protect an individual’s right to determine their own residency status and imposing obligations on states, when declaring an individual resident for tax purposes, to bestow upon the individual permanent permission to reside or even citizenship