The fight against racism and discrimination cannot be won without the silent, non-targeted, majorities’ active contribution and participation – recognizing one another as equal human beings, but significantly also going beyond this, to call out and change the structures and practices that prevent real equality. This is true whether we look to the US, in Norway, or Denmark and Sweden, France or the UK, or anywhere around the world 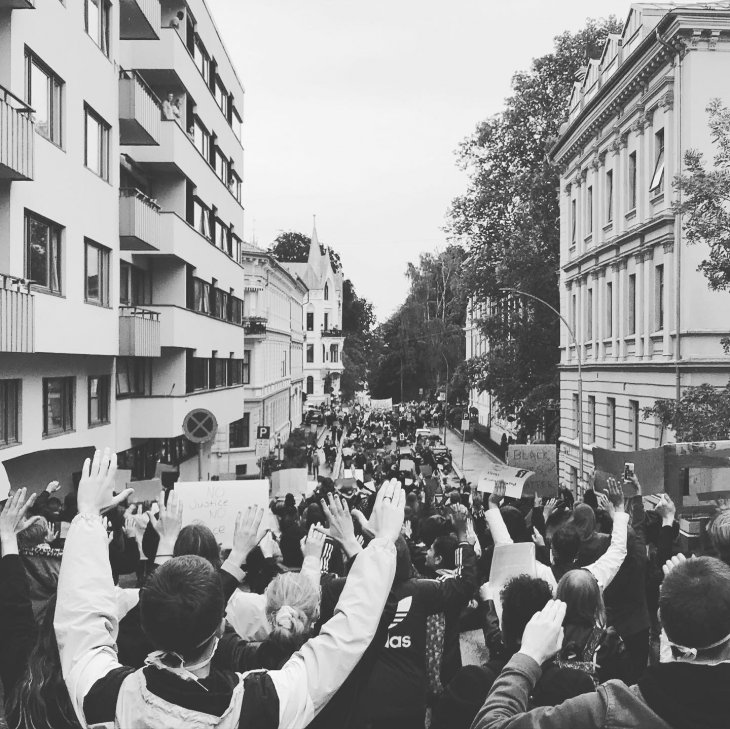 Youth march in a Black Lives Matter demonstration in June 2020 in Oslo. although recent demonstrations have made this research newly relevant, these findings are from 2015 and still resonate today. Photo: Teuta Kukleci

Opening any newspaper in Norway over the past week, as well as on social media, the stories of experiences of discrimination and racism, often intertwined in an everyday life which was not completely defined by such experiences, are courageously and with a sense of purpose being shared. Our research about migration-related diversity in Norway at PRIO, has time and time again confirmed what everyone should know by now: people of colour living in Norway, not least those born in Norway, experience unwarranted attention and questions, experience co-citizens implicit bias and overt racism. Mostly, these experiences are also mixed-in with other impressions – of inclusion, of opportunities which are made equal, of individual humans who see, who try to understand, who go that extra mile, who act justly.

In 2015-2016 we had the great fortune to engage with 300 pupils in high-schools, aged 16-18, in four locations in Norway, including Bergen and Oslo, as part of a project on how migration-related diversity impacts national identities. Our approach was to listen to find out what young people thought about these matters. In this blog post, we’d like to share some of the words our young interlocutors shared with us. The extracts are taken from our published articles, where there are also further extracts and analysis.

Meeting someone with dark skin color, I will most likely think that he or she is from abroad and is not Norwegian, but even so they can be Norwegian. I know a lot of people with dark skin who are born in Norway and who are just like me really, just with a different physical appearance. This just shows so well how we humans judge based on first impressions, instead of opening ourselves up to opportunities.

We deliberately choose to not describe the young people with regard to the family’s migration background, if any, so as to let their words speak for themselves. Sometimes it is clear from their statements, other times it is not. This underscores our basic point – these are young people in Norway with a legitimate right to hold views on Norwegianness, inclusion and exclusion. They were all pupils in Norwegian high schools, and 90% of our participants where born in Norway whereas 96% of them had Norwegian citizenship. 2/3 of the pupils had two parents born in Norway. Of the 1/3 that had not: 23% had two parents born outside Norway, while 12% had one Norwegian-born and one foreign-born parent. Among those with two parents born abroad, 15% had parents born in two different countries, other than Norway. This reflects the super-diversity among young pupils in Norway, though because we included schools in Oslo and Bergen, which are more diverse than the national average, this diversity is slightly higher than the national average.

An extract from a group discussion in a highly diverse school in Oslo, illustrating the power of first impressions:

– Let me tell you one thing, if you see me on the metro, and if you hadn’t known who I was, then you would never had said, him over there, he’s Norwegian, for instance. If you’d seen him [another participant], you’d either have called him a Somali, an African, or something else.

– I actually agree with what he’s saying.

– How people see me, that’s kind of how I see myself, I don’t go around and kind of say that I am something, like, different than what I am.

– Here I’d present myself as a Pakistani. In my home country, I’d present myself as a Norwegian. I don’t know how it is really, if I’m taking the metro, then I sit there and think: “Oh and this person is from there and that person is from there,” regardless of whether they’re born here and stuff, so we don’t think they are Norwegian at once because (. . .)

– Your background means so much.

– Your physical appearance and where it looks like you come from then, no one would guess that I’m sort of Pakistani, because people sit there and think that I am from somewhere, they would never call me Norwegian either.

– It’s first impressions, then, that’s how I think that you’re not Norwegian, but then the way you act and how you speak, so then one thinks that you’re Norwegian.

– I think first impressions are important.

– It’s the first impression that makes you think that you’re a foreigner.

An extract from a group discussion where young people of diverse backgrounds and different appearances share reflections on whether – and how – skin colour might matter:

– I think it is irrelevant, but still, it does matter, for what others. . .

– It may be easier to be seen as Norwegian if you don’t have a different skin color.

– With first impressions and stuff, it matters a lot for what other people think of you, but for what you think of yourself, it is. . .

The term ethnic Norwegian has grown in use over the past few decades, and essentially denotes ‘white Norwegian without immigrant background’. It is a term which is both much used by all sections of society, and simultaneously quite contested because it appears to uphold extremely rigid boundaries based on race, and it furthermore gives the suggestion that there are Norwegians and then there are real, ethnic Norwegians, thus clearly drawing on an understanding of nations as based on strict lineage, ancestry and blood-ties. Most people who use the term are likely to use it as a short-hand for white-majority Norwegian, without reflecting further.

In youths’ everyday life, skin color, whiteness, and race are highly visible and important for the manner in which they may experience belonging to the nation in Norway. There is a clear difference between the onlookers’ perspectives and the perspective of those being ‘observed’. One of the pupils above says: ‘It may be easier to be seen as Norwegian if you don’t have a different skin color’. She does not need to say, ‘different skin color than white’ in this group discussion; white is the automatically perceived skin color associated with Norwegianness, also among youth who themselves both self-define as Norwegian and are not white.

– [Does] Skin color [matter with regard to Norwegianness]?

– Or to feel Norwegian?

– To feel and be seen as Norwegian.

– Yes, but what about those who are adopted then?

– Exactly, it is a lot easier to become part of the Norwegian society if you have a Western appearance. If you have the wrong appearance, then you can easily become excluded.

– But it isn’t impossible to be Norwegian if you have a different skin color.

– But how irrelevant is it?

– I will say it’s pretty irrelevant, in my opinion at least.

– I have a different appearance and I experience that it does matter.

– Yes, but it shouldn’t be like that. We don’t want to admit that it is like that.

— But we cannot start with what we want it to be.

– No exactly, but unfortunately, it’s [like that]. It should change.

The extract reveals dissonance. There is the experienced Norwegianness, where physical appearance in the form of skin color is a boundary: ‘I have a different appearance and I experience that it does matter.’ And then there is a Norwegianness – in normative terms – which the pupils wish for. In relation to the ways in which visible difference, not being white, is experienced as a boundary to the everyday nation, pupils in this group stress that: ‘it shouldn’t be like that. We don’t want to admit that it is like that’ and ‘it should change’. The pupils wish for a Norwegianness that does not question their classmates’ natural and unquestioned right to belong.

The two below quotes from two pupils from different parts of Norway, underscore the same set of reflections:

Without there being anything racist in my way of thinking, when I see a person who is obviously not ethnic Norwegian, my first impression screams: ‘not Norwegian’. [. . .] at the same time, this first impression is something that I automatically get, but when I get to know this person, and get a proper impression, I make up my mind whether or not this person is Norwegian or not [. . .]. Of course, this is not something that I think about all the time, but when I do, this is my honest way of thinking.

People of all ages, when they look at a person and see something that is different, then you think there is a reason for it. And the reason is often that they come from a different country. This happens completely automatically, and I notice myself that it happens inside my head without me doing anything about it. I guess I should stop and think about it, and there are probably many people in Norway who should do the same.

So visible differences are shown to be relational – once you get to know someone your first impressions may very well change. This ‘relationality’ can potentially lead to both recognition and exclusion. There is the possibility that first impressions can be superseded through interpersonal relationships, but also the opposite alternative, that they are not, but rather contribute to upholding boundaries which are perceived as quite fixed. Experiences of race through first impressions become boundaries to the nation, and these are normatively questioned by youth. This in turn can allow space for the natural and unquestioned belonging of young Norwegians of color, as a normative ideal among peers (albeit it is recognized that this is not an everyday reality, yet).

Despite prevailing power hierarchies, there is scope for agency and reflexivity among the boundary-makers – ordinary young people – who all contribute to the (re)production of the nation as it is experienced. The collectively negotiated reality of youths’ interactions, included contrasting views, agreements, and accommodations of difference. On the one hand, feelings and experiences of powerlessness and frustration rose in the face of the hard-to-grasp notion of Norwegianness. On the other hand, there were feelings and experiences of togetherness, friendship, and co-producing the nation on youths’ own terms, as well as hopefulness that change is possible.

Analyzing our data, we found what we refer to as a ‘plural nation’ which has an inclusive approach to migration-related diversity. But also, the plural nation includes a plurality of experiences of nation-ness and of perceptions of nationhood, that echoes the approach to nations and nationalism taken by Frantz Fanon in the context of anti-colonial struggle. In a sense, the nation is an empty vessel, to be mobilized in exclusionary or in unifying ways. However, this presupposes awareness of, and willingness to confront, racialized power hierarchies as well as outright racism, within nations, also in Norway.

Societies such as Norway’s are diverse and diversifying when it comes to national, ethnic, and racial backgrounds. This is an empirical reality which is well worth being curious about. It is also the only everyday reality young people today know, and it is a reality wherein a struggle against racism and discrimination, is not only necessary, legitimate and urgent, but one that is unavoidable. Based on what we learnt from young people’s experiences and views, and their willingness to share and to listen, the struggle against racism and discrimination, for equality for people of all colours, is one there is reason to be cautiously optimistic about.

Erdal, Marta Bivand (2019) Negotiation dynamics and their limits: Young people in Norway deal with diversity in the nation, Political Geography 73: 38–47.