On August 5, 2020, over 11 million voters cast their votes to elect the 225 members in the Sri Lankan Lower House. With a two-thirds majority of the Sri Lankan People’s Democratic Alliance in this election, the Rajapaksa brothers, who were front and center in Sri Lankan politics from 2005 until 2015, have now made a full political comeback. Gotabaya Rajapaksa, secretary of the ministry of defense, who led the Sri Lankan armed forces against the Liberation Tigers of Tamil Eelam (LTTE), won the presidential election in November 2019. After the parliamentary elections earlier this month, the sitting president’s brother and former president and prime minister of Sri Lanka, Mahinda Rajapaksa, was sworn-in as the Prime Minister. While they were democratically elected, the Rajapaksas’ stranglehold on political power puts Sri Lanka on a path towards a profound degradation of the country’s quality of peace as they seek to institutionalize the 2009 military victory over LTTE. 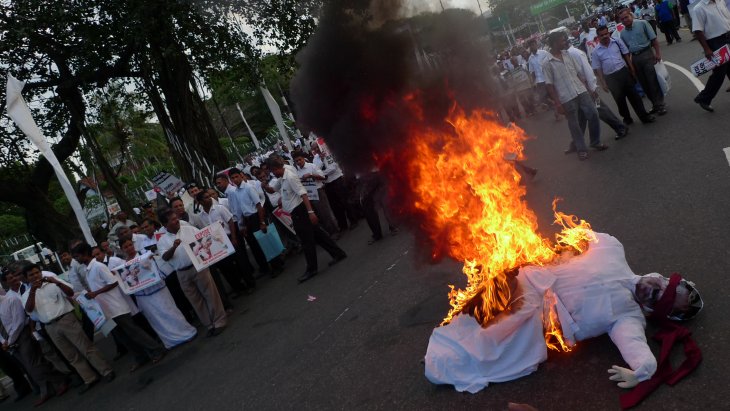 Beginning in 1983, the LTTE conflict caused over 100,000 deaths, and an estimated 300,000 Tamils were uprooted or forcefully evicted from their homes whilst almost a million sought refugee status in foreign countries. Throughout the conflict, the LTTE terrorized civilians across Sri Lanka with suicide and roadside bombings and, alongside the Sri Lankan state, inflicted significant misery and suffering on its people. The 2005 presidential election saw the victory of Mahinda Rajapaksa, who expressed his intention to crush the LTTE separatist conflict. After defeating the LTTE in 2009, the Rajapaksas established themselves as the saviors of the country, which helped them to secure another win in the 2010 presidential and parliamentary elections.

The consolidation of victory over the LTTE came to a sudden halt in 2015 when opposition parties banded together and won the presidential and the parliamentary elections. The most recent electoral victories, therefore, provide the Rajapaksas a second opportunity to further consolidate the 2009 victory. For the majority of people in Sri Lanka, the political return of Rajapaksas may assure political stability and continued domination of Sinhalese Buddhist nationalism, but it comes at the cost of quality peace.

No Armed Conflict, but not Quality Peace

My co-edited book with Peter Wallensteen, Understanding Quality Peace focuses on post-war countries and offers a practical approach to explore the quality of the changes in security, governance, economic reconstruction, reconciliation and transitional justice, and civil society. How does the post-LTTE Sri Lanka fare in these five quality peace dimensions?

With respect to security dimensions, there are no active armed groups after the defeat of LTTE. However, this victory has militarized the politics. The non-partisan military is now being turned into “the de facto praetorian guard of the Rajapaksa family.” Unlike in the past, the president has been appointing ex-service personnel in key bureaucratic positions. Since 2009, the military’s influence grips many facets of civilian life and directly contributed to the further securitization of the Sri Lankan state. In 2009, when the fighting with the LTTE was at its peak, the Sri Lankan state had only 223,100 armed personnel. According to World Bank data, by 2017, total armed personnel increased to 317,000, a 42 percent increase. Ethnic and marginalized groups do not feel secure even with this surge in security personnel. Since the Easter Sunday bombings in April 2019, Sri Lankan Muslims have faced abuses and targeted violence from Buddhist nationalists. The Tamil communities in the North and East remain heavily militarized, and civil institutions are yet to be fully rebuilt. The consequence is that Tamil women and girls are dependent on the military for everyday needs, which has put them at a higher risk of gender-based violence. Because of a lack of civil institutions, they also cannot report domestic violence.

With the Rajapaksas in control of the executive and the legislative branches, Sri Lanka is on the verge of turning into a family dictatorship. Early indications of this are the appointments of two other Rajapaksa family members among the 25 full cabinet members. The Rajapaksas are in a process to repeal the 19th amendment (2015) that curbs the presidential powers. The 13th amendment to the constitution (1987) gives a sort of autonomy to Tamil in the North and East by creating and devolving power to provincial councils, and the Rajapaksas have already shown their intentions of amending or removing the 13th amendment. With a two-thirds majority in the parliament, the Rajapaksas could initiate and secure these changes.

The gender balance in the governance structure is also getting worse. The 225-member parliament has only ten women members, a drop from 13 members in the erstwhile parliament, and only 4.1% of the provincial council members are women. With a shift to a top-down governance approach, and with little to no political space for women and ethnic minorities, Sri Lanka is on a path towards institutionalizing the exclusion of women and minorities whose inclusion is essential for good governance.

After the end of the LTTE conflict in 2009, the Sri Lankan government, with donor support, continued with the economic reconstruction initiatives in war torn North and East. The Asian Development Bank helped implement the North East Community Restoration and Development Project that sought to restore basic social infrastructure, community services, and livelihoods. By 2015, the project had some impact on access to healthcare, access to schools, and improvement in agriculture outputs. Approved in 2004, the North and East Housing Reconstruction Program was completed in 2011, two years after the fighting ended. This program supported the reconstruction of 46,000 houses in the North and East. Between 2009 and 2013, the Sri Lankan government spent over 221 Billion Sri Lankan rupees in infrastructure development in the North and East. This investment significantly increased the GDP of Sri Lanka with an average of 6.5% annual growth rate between 2009 and 2013, according to World Bank data. This rate declined to an average of 3.95% between 2014 and 2019. The government did not have a plan to sustain economic activities in the East and North. The economic plights of Tamils living in the North and East have not been adequately addressed as many uprooted families still lack housing, jobs, and access to land. Much of the land in the North and East still remains under the military (government) control and has not been returned to the rightful civilian owners. Without access to land and land titles, economic opportunities for people who have already suffered through many years of war remain limited.

Between 2006 and 2009, some 22,000 LTTE fighters and 6,000 Sri Lankan armed personnel were killed. It was estimated that over 20,000 disappeared and over 40,000 Tamil civilians were dead in the final few days of the fighting. The LTTE and the Sri Lankan Armed forces both engaged in war crimes. Nevertheless, the atrocities carried out by the Sri Lankan armed forces were the most gruesome, with reports of forced encampments, summary executions, and sexual violence against Tamil women and girls as documented in the OHCHR report. The pattern of atrocities and abuses did not decline in the post-war period as the abductions, arbitrary detention, rape, and sexual violence were reported in testimonials. Against this backdrop, Pope Francis, during his January 2015 Sri Lanka visit, urged for “pursuit of truth” as necessary means “of promoting justice, healing and unity.” In March 2014, the OHCHR passed a resolution to “undertake a comprehensive investigation” of wartime atrocities in Sri Lanka.

Under pressure from the international community, the Sri Lankan government co-sponsored the Human Rights Council Resolution 30/1 in October 2015 and promised four institutional mechanisms: (1) Commission for Truth, Justice, Reconciliation, and Non-recurrence; (2) Office of Missing Persons; (3) Judicial Mechanism with a Special Counsel; and (4) Office for Reparations. While the Office of Missing Persons was established in 2016, the pace of the entire process has been disappointing. In January 2020, the newly-elected president admitted that the 20,000 disappeared Tamils are dead. In February 2020, Sri Lanka withdrew its commitments to “establish a judicial mechanism.” As a presidential candidate, Rajapaksa had promised to release “war heroes” jailed on “baseless” offenses. He pardoned and released a convicted war criminal in late March 2020. If the wait for the last 10 years is any indication, victims and survivors in Sri Lanka are being asked to trust a system that is betraying them. No closure is on sight for them anytime soon. Their yearning for transitional justice and reconciliation is going to be a long and treacherous one.

The prognosis of the current state of quality peace in Sri Lanka is bleak, but it is not simply a result of the last few months, when the Rajapaksa brothers came to power again. This is the result of efforts over the last 10 years, many of which were initiated, facilitated and promoted by the Rajapaksa brothers. Their new hold on power should be a wake-up call for all Sri Lankans and the international community looking at working towards quality peace.

Quality peace can only be secured through inclusive social, political, and economic reforms. Reforms that provide access to power and resources for marginalized communities, along with addressing underlying historical grievances and working towards reconciliation, are critical for building sustainable peace in Sri Lanka. By marginalizing minorities and war-torn communities, Sri Lanka only increases the risk of renewed violence. Putting Sri Lanka on a pathway to quality peace will require concentrated efforts on the part of the international community.

Plz. read the Draft of the 20th Amendment to the Constitution-released today..!

I am afraid this is the most exaggerated nonsense I have read about the real situation in Sri Lanka. Unfortunately, such nonsense, without a proper analysis of electoral outcomes and public opinion from within the population on the ground, even if we take such biased observations for granted, remains polemical nonsense. They serve, however, to give academic analysis of a complex situation a really bad name. Pls visit Sri Lanka at least and find out what people really think about the post war years, what living without the Tigers are like. Look at numbers on investment in the north, particularly of public infrastructure. Look at who the Tamils of the North and East are voting for. Look at the details of the devolution of powers. Look at what VDEM experts are saying, without dismissing those country experts. Imagine that of the 15,ooo captured rebels, a handful remain in prison. Top tiger leadership have been allowed despite mass murder to enter politics and even hold public office. Please at least consult 1 Tamil academic.

Further to my comment yesterday, I urge PRIO blogs to publish the following by Dr. Michael Roberts, a well respected anthropologist and historian of Sri Lanka of Tamil origin, who has been a keen follower of the war and carefully rubbishes similar nonsense to Joshi´s.
https://www.colombotelegraph.com/index.php/moral-crusader-journeys-into-duplicity/