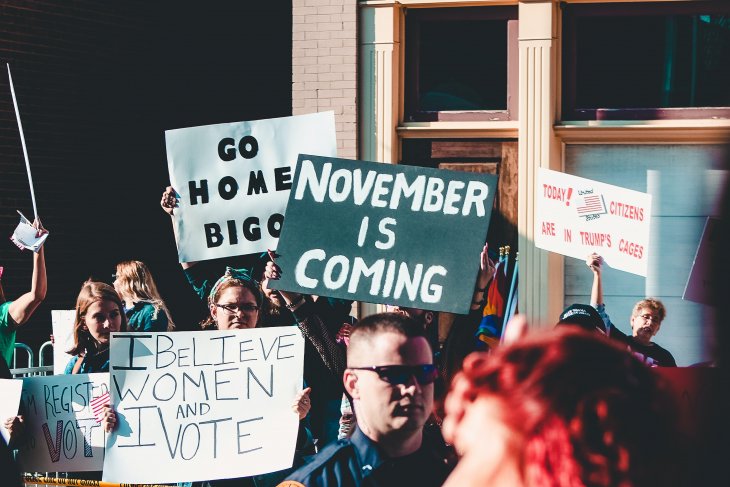 The PRIO – GWPS Women Peace and Security Index is now available as a US edition, with scores for each of the 50 individual states and the District of Colombia.[1] With the US election today, highlighting ongoing struggles and gender-related conflicts, we ask; what does gender have to do with it? It turns out, quite a lot.

The new and comprehensive measure of women’s well-being, rights and opportunities is structured around three basic dimensions: inclusion (economic, social and political), justice (formal laws and informal discrimination) and security (at the individual and community levels). The index ranges from 0 to 1, in which 1 indicates a high level of women’s well-being, rights and opportunities, and 0 an equally poor level. Yet, no state possesses a top or bottom score.  At the bottom of the list we find Louisiana and Mississippi with scores as low as 0.167 and 0.182, respectively. At the top of the index we find Connecticut and Massachusetts with scores of 0.696 and 0.709.

Figure 1 illustrates the WPS scores for the 51 units and reveals large differences across the country. It is notable that the map seems to mirror traditional party lines. Figure 2 shows the percentage voting for Trump in the 2016 election. While the maps are not identical, it is clear that the two seem to be linked.

Figure 2: Percentage voting for Trump in 2016

Just as in many other places across the world, US women are more likely to vote for candidates further to the left than men are. In 2016 Trump won 52% of the votes cast by men, but only 41% those cast by women. The gender gap of 11 percentage points tied the biggest recorded in the four decades it’s been tracked. Surveys show that this year’s gender gap is likely to become the largest in history. Biden’s average lead among women in recent interview polls is about 25 points; neither party’s nominee has ever led by that much among women in a final pre-election survey, not even in the landslide years of 1964 and 1984.[2]

With the gender gap being larger than ever, and this election featuring gender issues, we examine how the WPS scores coincide with the forthcoming 2020 election. In other words, is women’s well-being in the state linked to the election outcome? 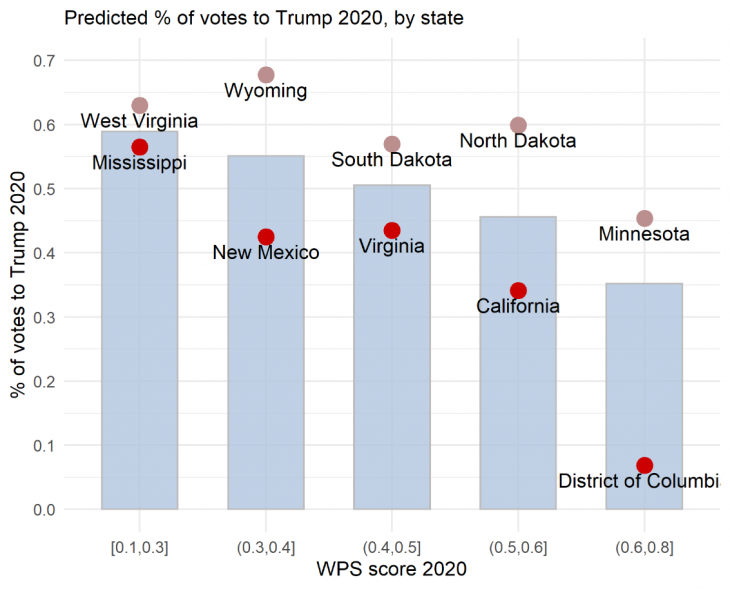 Figure 3: The WPS index and the predicted 2020 outcome

To examine this, we start by looking at the most recent election forecast offered by FiveThirtyEight.[3] In Figure 3 we have divided the 51 states into five groups based on their respective WPS scores. The groups with the lowest scores are ranged to the left and the highest WPS scores are ranged to the right. The bars for each group show the average percentage of votes within the state won by Trump.

When looking closer at the WPS ranking, the divide between “Republican” states and “Democratic” states becomes even more evident. All the 15 top-ranked states in the WPS index are states where the majority of votes went to the Democratic party in the 2016 election. Looking at the current election, amongst the states where Trump has a lead, Nebraska does the best on the WPS index, at number 19. When exploring the other end of the scale, the bottom ranked states, all the ten lowest ranked states are states where the Republican party got the majority of the votes in 2016. Effectively, interpreting the index as a measure of where it is best and worst to be a woman in the US today, women are often worse off in states where the Republican party governs.

Can we predict election outcomes with well-being?

To further investigate this relationship, we ran three simple regression models to see how well the WPS index predicts the upcoming election as well as the outcome of the 2016 election. Doing this we can control for variables known to be linked to whether the state is red or blue; urbanization and the income level (Gelman: 2016). We also control for population size. 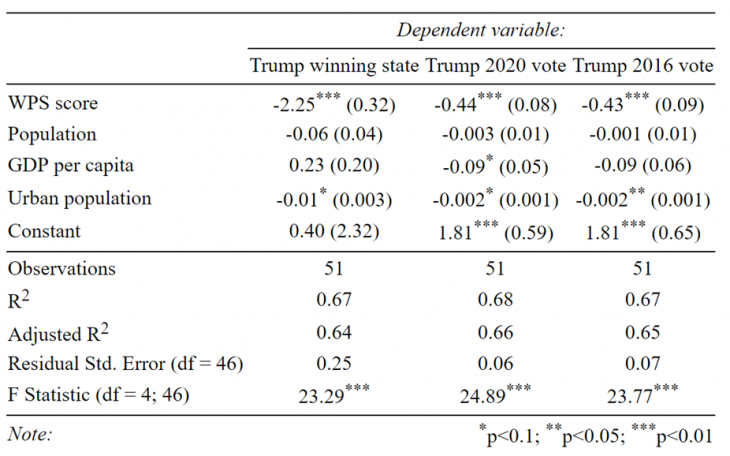 Model 2 shows the effect on the expected share of votes won by Trump, and model 3 on the share of votes won by Trump in 2016. As we can see the effect is negative indicating that Biden is more likely to win in states with a high score on the WPS index. This model predicts that Biden is likely to gain 24 percentage points more votes in the highest ranked states on the WPS index, than the lowest ranked states, all other variables set to the mean.

Model 3 estimates the effect on the election in 2016 and shows that he did better in the low ranked states. It is notable that the effect is about the same for the expected 2020 outcome as it was in the 2016 election. This all sums up to Trump doing well in states faring poorly on issues related to women’s well-being, rights and opportunities.

The fact that the states’ WPS score and party preferences are linked to each other should not be all surprising. Three out of the twelve indicators that make up the index are measures where traditional Republican policies tend to score worse than policies in Democratic-governed states. This is particularly the case in the justice-dimension of the index where ratification of the Equal Rights Amendment (ERA), reproductive healthcare access, paid parental leave and the possibility of having an abortion without in-person counselling, are important variables. To this date there are 12 states which have not yet ratified the ERA and in all of these states the majority voted for Trump in the 2016 election. When it comes to reproductive healthcare access, there has been an ongoing campaign by Republicans to defund reproductive healthcare centers such as Planned Parenthood. There are only nine states where parental leave is mandated, but none of these states are traditionally red states. 14 states have made it impossible to have an abortion without in-person counselling, and these are all states where Trump won in the last election.

However, most of these measures are not as directly linked to the party preference of the state. The fact that the level of women’s well-being, rights and opportunities are so systematically linked to the election forecast is interesting. The women’s rights – party preference nexus is a complex one and these processes are likely to reinforce each other.

[1] The WPS US edition is produced by Georgetown Institute for Women, Peace and Security and is available here: https://giwps.georgetown.edu/usa-index/.

[3] Very simplified, their forecasts rely on polls average combined with a modeled estimate of the votes based on demographics and past voting patterns. This is further joined with the incumbent party’s performance and economic conditions to create a forecast of the election day. The finished model runs 40,000 simulations every time it is updated