On the occasion of the 10th anniversary for the terror attacks in in Oslo and at Utøya on 22 July 2011, there is a renewed debate in Norway. The main focus is on the political motivations for the attack, as well as on how Norway has dealt with (or failed to confront) a growth in radical right-wing political activism. It was with considerable apprehension that I revisited my own reflections, first published in Aftenposten on 26 July 2011. I republish this today, unaltered. The text expressed my hopes for how Norway would respond, and I believe today that many things have been done right. Had I written this today, on the basis of what we now know, in the context of the current debate, it would have read differently. Yet, I find that the main message is one that I still stand for. 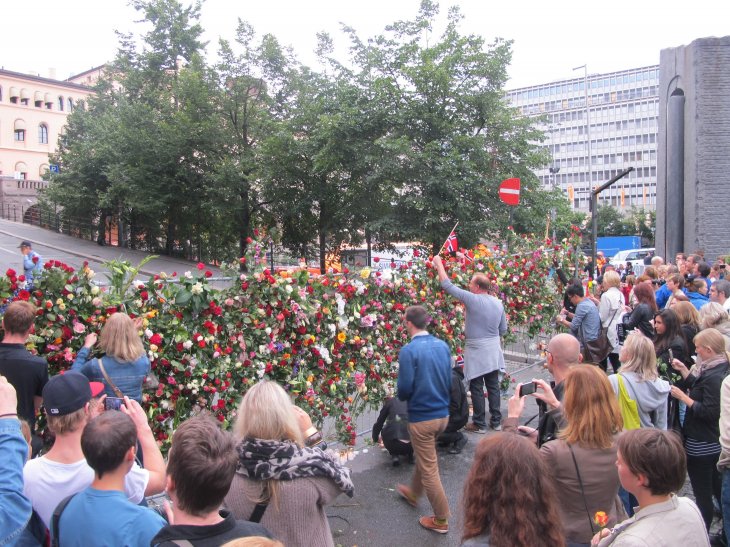 Norway After the Terror (written in July 2011)

The debate about new measures against terror, in the aftermath of the attacks in Oslo and at Utøya, is important. We need to stand by the very values that the terror aims to demolish. Inherent to our existence as humans, as a society, is the ability to live with risk.

The horrific events that shook both Norway and the rest of the world last Friday represent an extremely brutal and heavy-handed attempt to influence Norwegian politics and society. There is still much that we do not know about the attacks, and there will undoubtedly be intense debate over what could or should have been done to prevent them in the days, weeks, and months to come. But, it is beyond doubt that the attacks demonstrated our vulnerability – both as individuals and as a society. On the other hand, the very nature of life itself involves being at risk and living with risk – something that the international security measures instituted in the wake of 9/11 did not always take into account. Those measures have entailed huge social and financial costs, encompassing wide-ranging control and surveillance practices, as well as breaches of fundamental legal principle, ultimately perhaps resulting in deepening ethnic and religious divides.

The perpetrator of last Friday’s atrocities, Anders Behring Breivik, has described his political motivations in detail in a 1500-page ‘manifesto’ released on the Internet. Breivik is a self-declared anti-democrat, vehemently opposed to the development of a more multicultural society in Norway and the rest of Europe, and driven by considerable sense of hatred towards the Norwegian political establishment. As his actions reveal all too well, he has been prepared to retort to extreme violence to get his message across, viewing himself as an instrument and a martyr to his cause, willing to make sacrifices for what he believes in.

Unlike many of his fellow partisans on the extreme right, Breivik chose neither immigrants nor religious symbols as targets for his acts of terrorism. Instead, he directed his rage directly at the heart of political power in Norway, first by attacking the main government building in Oslo and then by unleashing a wave of deadly violence at the annual summer camp of the Norwegian Labour Party’s youth wing on the island Utøya, some 24 miles north of the Norwegian capital. Through this second attack, Breivik delivered a lethal blow to a rising generation of politicians from the party that has been in government more often than any other political party in Norway since World War II.

It is not possible to describe the Oslo and Utøya attacks as anything but pure terrorism. The political motivation is crystal clear. The victims were civilian. And the aim has clearly been to create widespread anxiety and distress, effecting a change within Norwegian society by forcing dramatic political counteractions. Breivik has participated in far-right extremist networks, but claims to have been acting on his own in these attacks. It is both incredible and terrifying to think that one man alone has been able to carry through attacks with such horrendous consequences.

How has Norwegian society responded to these events?

Over the last few days, there has been a tremendous mobilization of solidarity and compassion. Perhaps the most powerful symbolic act occurred when Siv Jensen – the leader of Norway’s Progress Party and perhaps the Labour Party’s most vocal opponent – declared: ‘Today, we are all members of AUF’ (the Labour Party’s youth wing). The leadership of the Labour Party, hurt so badly by Friday’s attacks at both the personal and the political level, has repeatedly urged people to stand together and remain faithful to principles of political openness and trust. ‘We are still shocked by what has hit us, but we will never give up on our values,’ declared Prime Minister Jens Stoltenberg during a memorial ceremony held in Oslo Cathedral on Sunday. More than 100 000 took part in a flower-parade on Oslo on Tuesday, four days after the attacks, reclaiming the city’s public spaces.

So far, there have been no calls for a strengthening of counterterrorism measures. Criticism of both the government and the country’s police and security forces has been very hushed. Islam-skeptics were silenced when it became clear that the malefactor was an ‘ethnic Norwegian’. Voices have been raised, however, in relation to what punishment Breivik should or could receive, as the maximum term of imprisonment that can be granted under the current penal code will be 30 years (presuming he is charged with ‘crimes against humanity’; for murder the maximum is 21 years). There has even been talk of reintroducing the death penalty, which Norway abolished in 1902. Yet, almost three-quarters of the 60,000 people who voted in a Facebook poll on the issue were opposed to these terror attacks resulting in a reintroduction of the death penalty. The first reactions of people in Norway thus seem to involve an expression of wholehearted support for the established mainstream values of Norwegian society.

Will Norway have to rethink terrorism prevention and preparedness?

Still, critical voices will be raised, and the introduction of new counterterrorist measures will be debated in depth. Will Norway have to rethink terrorism prevention and preparedness? Much of the debates that will take place will naturally center on whether militant right-wing radicalism has been taken sufficiently seriously. There is no doubt that a strong focus on militant Islamism in recent years has overshadowed other potential sources of terrorism.

In March 2011, Norway’s Police Security Service (PST) issued its annual threat assessment for 2011, in which it claimed that neither the extreme right nor the extreme left constituted a serious threat to Norwegian society, as a lack of strong leaders hindered recruitment in these circles. Concern, however, was expressed about possible links between extremists and criminals, as well as the increasing influence of extremist groups from outside Norway. The PST also expressed concern that a certain fascination with violence was increasingly becoming an ideology in itself. Anders Behring Breivik, however, does not fit these patterns. For him, political ideology is clearly a strong driving force. And, though he may have relied on the Internet for knowledge and information, he does not appear to have needed any form of external organization in order to carry out his acts of terrorism. A key question is thus whether Breivik is the exception to the rule – or whether new forms of ‘virtual society’ are breeding a new kind of terrorist?

Another question that will need to be addressed is why Breivik did not find sufficient outlet for his views through elections, party politics, and public debate. Why did he feel the need to resort to terrorism? Earlier in life, he seems to have tried out a number of different channels for his views, including membership of the right-wing Progress Party’s own youth wing. He does not appear to be obviously insane. The political – albeit extremist – views that he sets out in his ‘manifesto’ are to a certain extent logical and consistent. Given such views, the resort to extreme violence can be judged as rational. Breivik’s gradual radicalization seems to have resulted from his lack of success in being heard and accepted through traditional channels. We still do not know why this process culminated in the extreme violence we witnessed last Friday, but it is very hard to see how anyone could have spotted his intentions through what he had published previously.

Norwegians will likely no longer meet government ministers skiing in the woods or pass them on the sidewalks of Oslo’s streets.

New security measures will surely be implemented. Norwegians will likely no longer meet government ministers skiing in the woods or pass them on the sidewalks of Oslo’s streets. There will be a strong temptation to close off streets, to erect walls and fences, and to establish airport-like security measures at the entrances of public buildings. We know the costs of such measures, which fit uneasily with the Norway’s existing culture of openness and trust. A political summer camp for teenagers will not be the same with screening, searches, and mandatory entrance permits.

Preparedness will be another obvious topic. The very first people to respond and provide help to the victims of the shootings at Utøya were ordinary people – tourists and people living nearby. We should not be unduly concerned over this, as this is what happens in most crisis situations. Professional preparedness within firefighting, medical care, and security will still be very important. The terrified local residents from the area around the lake at Tyrifjord could help the teenagers swimming for their lives, but they could not tackle the assassin on the island. Only special police forces could stop him. A better staffed and equipped police force could perhaps have done little to prevent the attacks of last Friday, but the scope of the destruction and loss of lives might have been lessened.

The terrorist attacks in the United States on 11 September 2001 were followed by the institution of a range of measures intended to prevent similar episodes in future. Surveillance of public spaces, as well as cell-phones and other forms of electronic communication, became widely accepted. Security became the mantra intoned throughout US society. The strengthened cooperation between governing and security bodies both within the USA and internationally has certainly produced results, and planned acts of terrorism have no doubt been averted. However, the costs involved in all the security measures at airports and public buildings have been tremendous, in terms of both time and resources, while freedom of movement has been seriously reduced and established principles of rule of law are under strain. In addition, many of the security measures create a false sense of safety, and can even be counterproductive.

The very best protection against future acts of terrorism in Norway will involve maintaining the openness and trust that characterizes Norwegian society and government, leaving room for the expression of political views of many different kinds. We cannot remove dangers through regulations and control. Such measures will not save us from the dangers of violent extremism and terrorism. Though it may be very demanding, we have to learn to live with risk. This is part of being human, part of being a society. The upcoming debate will be very important. We will need to debate in ways that show due respect and compassion for the victims and survivors of the terrorist attacks. We also need to keep a firm grasp on the core values that the terrorist violence aimed to demolish. The vision of total security is not just an impossible vision: it may also be one that undermines the very nature of the type of society we seek to defend.