The recruitment and use of children as soldiers is one of the United Nations Security Council’s ‘six grave violations’ against children in times of war, as well as one of the most significant consequences of armed conflict in terms of children’s wellbeing. On 30 November, Save the Children launched its new report Stop the War on Children: A crisis of recruitment. The report is based on a new mapping of children at risk of being recruited or used in armed conflict conducted at the Peace Research Institute Oslo (PRIO). 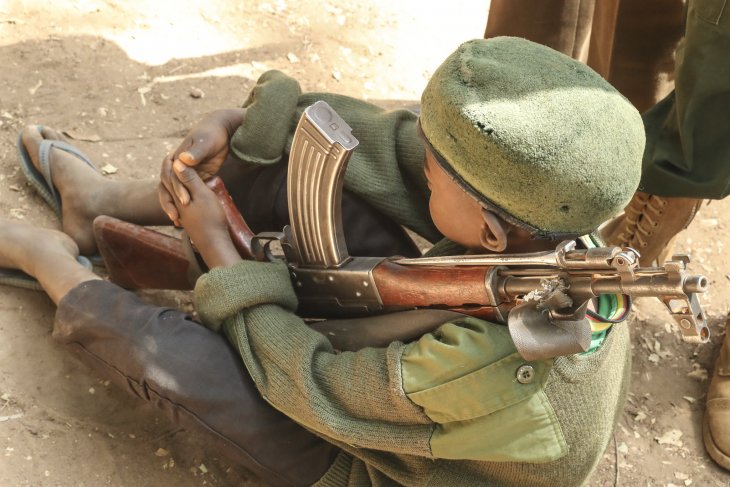 Our findings are quite alarming: We find that, in 2020, approximately 337 million children (more than 1 in 8) were living in a conflict zone in which one or more actors recruited children. We also find a worrisome upward trend. Our estimates suggest that the risk of recruitment has steadily increased over the past 30 years, with the highest recorded number of children at risk in 2020.

Identifying children at risk of recruitment

The Paris Principles (2007) define a child associated with armed forces or armed groups as: Any person below 18 years of age who is, or who has been, recruited or used by an armed force or armed group in any capacity, including but not limited to children, boys and girls, used as fighters, cooks, porters, messengers, spies or for sexual purposes. For the coding of reports of child recruitment, we have updated and supplemented existing data collected by the Dallaire Institute for Children, Peace and Security and Haer & Böhmelt’s dataset on child recruitment.

The annual United Nations (UN) Impact of Armed Conflict on Children reports identify incidents of six grave violations against children including the recruitment and use of children. Although this data collection is very valuable, the UN does not cover all conflict-affected countries in their efforts. Furthermore, their information varies greatly in specificity and accuracy. In other words, we do not know exactly how many children have been recruited as child soldiers.

However, we do know which conflict actors have been reported to recruit minors and we know the location and timing of specific conflict events where these groups were active. Combining this information with geographical data on population density, we estimated how many children live in areas with recruitment of children by conflict actors. More specifically, we define children at risk of recruitment as:

Children (under 18) who live within 50 km of one or more conflict events with at least one conflict actor reported to have recruited children in a particular year. 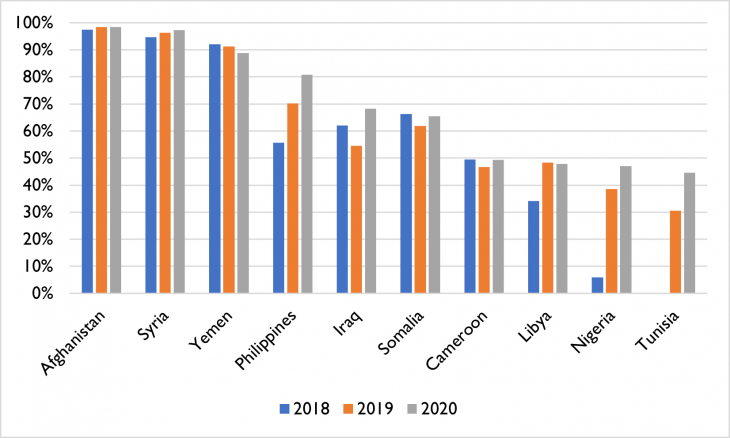 What can be done?

First of all, in order to reduce the problem of recruiting children for armed conflict, we need more systematic knowledge on the root causes of child recruitment, as well as more systematic and nuanced data on who is recruited where, when, and by whom. In general, more resources should be invested into generating and managing data related to children and armed conflict across time and space. At the same time, there is an urgent need to protect the more than 337 million children that were at risk of being recruited in their home communities in 2020.

Policymakers should work towards:

As the child population at risk of recruitment for armed conflict seems to be increasing, the imperative to take action is more urgent than ever. As a member of the UN Security Council, as well as chairing the working group on Children in Armed Conflict, Norway now has a particular responsibility to contribute to this end.

You have omitted Columbia, S.A., where children are armed and trained, forcibly recruited to kill it’s government officers, drug cartels, government military, and NGOs illegally stealing constitutional deeded farm lands of former Black African slaves, altogether fraught with corruption with the cooperation and present blind eye of the US CIA; going back 35 years to present right under your nose. Wake up!

We have not omitted any country from our analysis. According to our estimates, in Colombia in 2020 app. 3,415,443 children (or app 21 % of the total child population) were living close to conflict actors recruiting children.

Colombia is ranked as number 18 of the countries with the highest share of child population at risk of recruitment.

This poses a security threat not only to the nation housing the radicalized former child soldiers, but to the entire international community. 1 The UN, with its internationally recognized standards for ethics of armed conflict, states that a child soldier is any person under the age of 18 belonging to or being utilized by an armed group. The UN also states that child soldiers may be fighters, but also may be used as cooks, sex workers, spies, or in other roles on behalf of an armed group.