Political scientists have long assumed that a strong state is a prerequisite for a well-functioning democracy. Recent research suggests that this assumption is wrong. 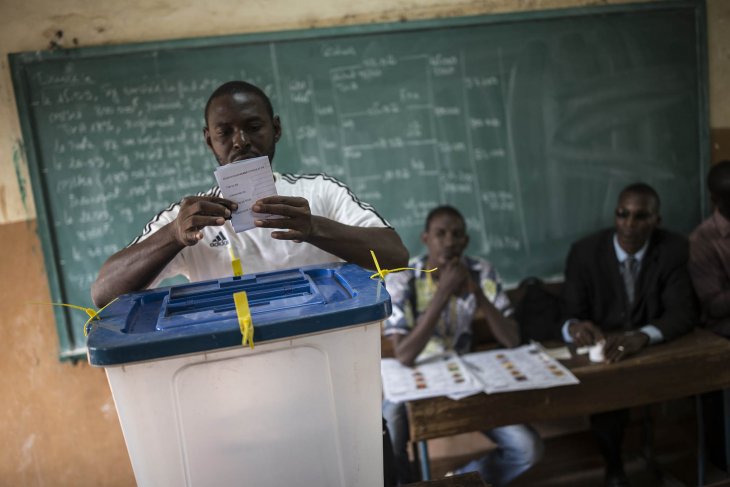 Scene from a polling station in Bamako during Mali’s presidential election on 29 July. Photo MINUSMA/Marco Dormino

“Building a modern democratic state in Afghanistan where the government’s writ runs uniformly throughout the country implies a timeframe of many years, indeed decades,” wrote the former American Secretary of State Henry Kissinger. “It was precisely Afghanistan’s fractiousness, inaccessibility and absence of central authority that made it an attractive base for terrorist networks in the first place.”

Kissinger’s analysis of Afghanistan hints at what appears to be a widespread belief: without strong state institutions, run by a competent and law-abiding bureaucracy capable of performing a broad spectrum of tasks, it will be impossible to achieve a well-functioning democratic government.

Could even the introduction of democracy in these kinds of weak states merely exacerbate an already bad situation, for example with regard to the possibilities for achieving stability and economic development?

State-first argument: State institutions must be in place first, then democracy.

State institutions must be in place first, then democracy. Only in this way can we ensure economic development and a well-functioning society. This is the so-called “state-first” argument, which comes in many varieties. A familiar formulation of the argument came from Samuel Huntington, while a later variation was developed by Francis Fukuyama in his modern classic The Origins of Political Order.

Briefly, the argument goes like this: if a country is to have any hope of being like “Denmark” – Fukuyama’s metaphor for a wealthy, stable and democratic society – it must engage in state-building before democratization. If poor countries democratize “too early”, i.e. before state-building is complete, economic development will fail to materialize.

According to the “state-first” argument, if democracy is introduced in such countries, politicians seeking re-election will have incentives to implement poor and short-sighted economic policies in order to appeal to their supporters. In addition, the absence of strong state institutions provides fertile ground for corrupt government.

In other words, democracy is seen as an unsuitable form of government if the state is weak, and putting democratization before state-building is seen as a cause of poor economic policy and governance. We believe that this is incorrect.

… the argument rests on a number of powerful yet problematic assumptions.

In a short new book we scrutinize the “state-first” argument. Among other things, we discuss how the argument rests on a number of powerful yet problematic assumptions. For example, we are critical of the exaggerated belief in the success of dictatorships at state-building and, conversely, of the idea that professional, impersonal bureacracies cannot be established within democracies.

In our book, we show how there is only scant evidence to support the state-first argument.

Previous studies have often drawn persuasive conclusions from less relevant cross-country comparisons, and used variable and often vague critieria to measure democracy and state-building. They have committed a classic fallacy in the methodology of political science, namely they have based general conclusions on a limited number of countries – and countries that were selected in potentially problematic ways.

For example, researchers have taken prosperous European countries that built their state institutions prior to democratization as the starting point for comparisons with poor countries with weak state institutions. But these prosperous countries also have many other underlying characteristics that may have contributed to their growth, apart from the order in which state-building and democratization took place. Accordingly, we do not have any sound basis for knowing whether the state-first argument is correct.

In our book, we conduct a thorough review of the different variants of the state-first argument and infer many testable hypotheses that we test against empirical evidence. We also clarify several of the assumptions on which the argument rests, and assess whether these are compatible with what we can observe in the data. To assess these assumptions and the hypotheses, we use a large data set that covers approximately 180 countries in the period 1789 to 2019 and conduct a broad spectrum of tests. In brief, we find no support for the state-first argument when economic growth is the outcome that is studied.

… democratization appears to be favourable for economic development, including in weak states.

Since we are focusing on economic growth, our research does not tell us anything about the extent to which the state-first sequence contributes to other desirable outcomes such as an absence of civil war or democratic stability. What we can say clearly, however, is that democratizing before building state capacity does not appear to damage economic development. If anything, it is rather that democratization appears to be favourable for economic development, including in weak states.

Seen in light of the popular state-first argument, this finding is surprising.

This finding may also be relevant for how countries such as Norway direct their international development aid policies. If democratization had had a high economic cost in countries with weak state institutions, one could have had a legitimate debate about the extent to which one should abstain from assisting with democratization or supporting opposition movements in countries with authoritarian regimes.

Perhaps one should be patient and allow the authoritarian regime to build up state capacity first, in order to avoid “premature democratization” exacerbating the economic situation of people living in poverty?

According to our analysis, this kind of trade-off between democratization in weak states and economic growth does not exist. Accordingly, we can safely support forces that are working for democratization in such states, without fearing that we are undermining these countries’ economic development.