Migrant smuggling: moving people across borders for profit, is reported to be one of the fastest-growing and most lucrative forms of organized criminal activity.

Smugglers crowd their human cargo into shipping containers and onto boats and trucks. Many migrants arrive safely and consider the investment well spent. But migrant smuggling is a dirty business: excessive profiteering and exploitation routinely place the lives and wellbeing of smuggled migrants at serious risk. 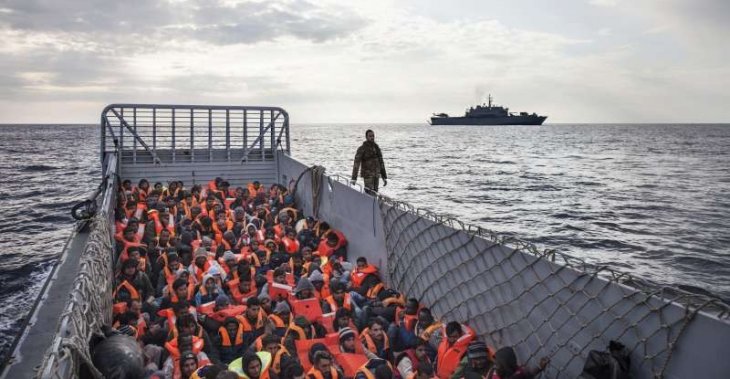 The current international narrative around migrant smuggling, most clearly spelled out in the ongoing negotiations around a Global Compact for Migration, identifies smuggling as a criminal enterprise that must be stopped at all costs – and clearly asserts that it can be stopped with sufficient resources and cooperation between states.

This analysis reflects a distorted view of reality. It makes the challenge seem straightforward, but it is fundamentally misguided. Smugglers are winning and they will continue to do so for the following reasons.

A near perfect business model

About 3% of the world’s population live outside their country of birth, but nearly three times as many people wish that they did. Some are hoping for safety from violence and human rights abuses, some want a way out of poverty, and others simply seek to take advantage of opportunities for economic or social advancement that are not available at home. Yet, for the vast majority of aspiring migrants, restrictive immigration policies block the pathway to the benefits of living elsewhere.

the straightforward business of bridging desire and opportunity

Migrants smugglers are therefore implementing a business model that other entrepreneurs can only dream of: they are in the straightforward business of bridging desire and opportunity. Put simply: migrant smuggling will inevitably be found where pressures to migrate are not matched by opportunities to do so safely and legally. It is only if borders were truly open that the market for smugglers would cease to exist.

In the face of clumsy, oppressive law enforcement, smugglers have become increasingly sophisticated: professionalising their operations and developing the intelligence and connections necessary to withstand well-funded counter-smuggling operations. Recently, smugglers have demonstrated a breathtaking level of flexibility and creativity in taking advantage of the presence of humanitarian organisations seeking to rescue migrants in distress.

Migrant smugglers have also adapted to increased pressure by developing resilient organizational forms in which the lower tiers are flexible and expendable. In fact, at the bottom levels, the lines between smugglers and clients are frequently blurred, with individual migrants enticed or coerced into taking on responsibilities such as navigating boats. They might face arrest and prosecution upon arrival, while the smuggler who organized the journey and reaps the profits is shielded from risk.

States understand that battling migrant smugglers requires them to address demand for the services they provide. This explains the vast resources spent on awareness raising campaigns that seek to dissuade prospective migrants from procuring smuggling services. Such campaigns often employ stark imagery of suffering and death. They never acknowledge that it is the fight against migrant smuggling that typically makes the journey more dangerous.

The result is a fundamental mismatch between information pushed by governments and the reality for prospective migrants.

First, many clients of migrant smugglers know all too well that the journey is dangerous. Their decision to accept facilitated migration is based on a calculation of risk. Depending on the strength of the imperative to move, a decision that factors in risk of harm or even death may be eminently understandable.

Second, prospective migrants face a genuine challenge in separating the “good” smugglers from the bad ones. They must identify someone who will take them to the destination as safely as possible for an agreed price. They are well aware that while most will deliver the agreed service, others will not. In the context of this challenge, campaigns that portray all migrant smugglers as intrinsically ruthless and exploitative are neither credible nor useful to their target audience.

The limits of the liberal state

Ultimately, the modern, liberal, democratic state is simply not up to the task of stopping facilitated irregular migration. As the United States and Australia have already learned, and countries of southern Europe are coming to appreciate, ending unwanted migration in the face of strong counter-forces can only be effectively achieved through the continuous deployment of immense force and violation of individual rights on a massive scale that grossly offends liberal values.

Certainly, there is strong and growing public tolerance for increased militarization of migration control – and even for the criminalization and detention of migrants. Within liberal democracies, there is little sustained public appetite for these large scale, violent interdictions; mass incarcerations; and forced returns that would inevitably be required to disrupt migrant smuggling.

The irony is that the features of preferred destinations that prevent them from acting effectively against migrant smuggling, are the same qualities that attract many migrants in the first place: respect for the rule of law; in-principle commitment to human rights; acceptance of the right to asylum; and rejection of discrimination. Migrant smugglers understand and exploit this paradox.

Time for some honesty

The lies and obfuscation around migrant smuggling waste time, energy and good will. They also prevent us from facing a few stark truths. The first relates to refugees: without smugglers, most of those fleeing war and persecution would never stand a chance of reaching safety. Attacking smuggling without acknowledging – and at least attempting to deal with – the fatal flaws of the global asylum regime is deeply dishonest.

It also renders a single-minded law enforcement approach not only inefficient, but dangerous. When smuggling represents the only route to safety, cracking down on smugglers will simply make the journey more expensive, difficult or dangerous for the people who still need smugglers’ services. The smuggling of refugees is perhaps the most intractable part of the migrant smuggling challenge. Yet it falls between the cracks in the international community’s efforts to improve migration governance and refugee protection.

The second truth is even more uncomfortable. Without significant structural change to global migration regimes, there is really no solution to the organized, for-profit facilitation of irregular migration. Migrant smuggling is, in fact, the textbook example of the “wicked problem”: one that is hard to define, that keeps changing, and that fails to present a clear solution because of pre-existing factors that are themselves highly resistant to change.

It is only by accepting the complex, muddled reality of migrant smuggling that we take the first step towards anything representing progress. There will be no simple solution, but until this phenomenon is addressed with humility and honesty, the smugglers will keep winning.