Contrary to recent headlines, an internal crisis over the handling of the COVID-19 pandemic was not the cause behind the toppling of Kosovo’s government Wednesday evening. The crisis was only the trigger for the inevitable result of the recent pressure campaign against the small state by the Trump administration, which aims at securing a deal between Kosovo and Serbia this year. 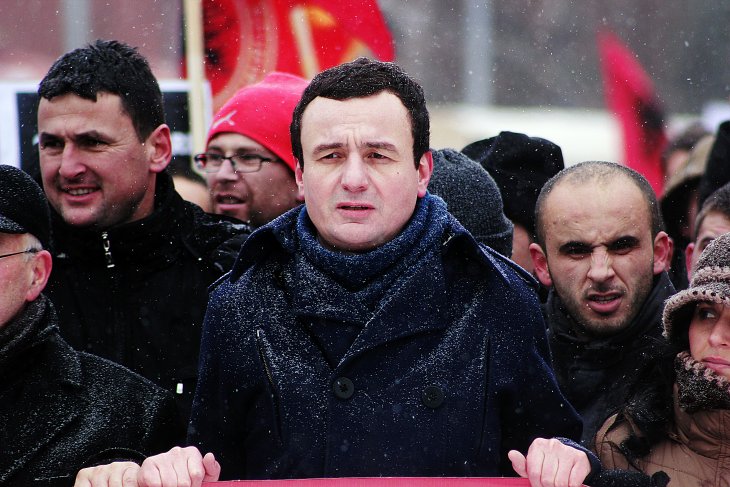 Albin Kurti at a protest in 2013. AgronBeqiri via Wikimedia Commons.

After a heated 12-hour debate in parliament, the coalition government of Prime Minister Albin Kurti lost a no-confidence vote, 82 to 32, with one abstention. The no-confidence motion was levelled by coalition partner Democratic League of Kosovo (LDK) against Kurti and his party Self-determination (LVV). The motion came after Kurti fired LDK’s interior minister last week for not being in line with the governments COVID-19 measures and calling for a state of emergency, which would expand the President’s powers.

Trump has yet to score a major diplomatic win and re-election season is already upon him. On top of that, his administration’s poor handling of the COVID-19 pandemic makes it even more important to score a symbolic win to boost his reelection chances.

But zoom out and this is merely the trigger for the fall of the government. The grand scheme of things makes it less surprising that Kurti’s government lasted only 52 days. In the weeks leading up to the motion of no-confidence, the Trump administration led an intense pressure campaign on Kosovo and its politicians. The meeting between Kosovo’s President Hashim Thaci and Serbian President Aleksandar Vucic in Washington earlier this month, and the developments in the weeks following the meeting, have made it clear that the Trump administration wants to move the dialogue between Prishtina and Belgrade from Brussels to Washington, in an effort to strike a deal between the two states. Such a deal would give Trump a much-needed diplomacy win. After the failed North Korea nuclear talks and the ridiculed ‘Deal of the Century’ for the Middle East, Trump has yet to score a major diplomatic win and re-election season is already upon him. On top of that, his administration’s poor handling of the COVID-19 pandemic makes it even more important to score a symbolic win to boost his reelection chances.

Eager for a foreign policy trophy to flaunt in front of the American public during election season, the Trump administration has made the US ‘enter the chat’ again.

That is why he has set his eyes on striking the deal that the EU has failed at mediating for the last decade. EU was essentially left to deal with problems in its own backyard, between Kosovo and Serbia, when the European Union Rule of Law Mission in Kosovo (EULEX) took over the state building activities and responsibilities in Kosovo from United Nations Mission in Kosovo (UNMIK) in the late 2000’s. In 2011, the Brussels Dialogue between Belgrade and Prishtina on the ‘normalization of relations’ was initiated, which led to the ‘Brussels Agreement’ in 2013. However, as soon as implementation of the Agreement was put on the agenda negotiations went into a stalemate, and they have remained there ever since.

Now, eager for a foreign policy trophy to flaunt in front of the American public during election season, the Trump administration has made the US ‘enter the chat’ again, albeit not in the way Kosovo would have hoped. Arguably the most pro-American state in the world, following the NATO bombing campaign during the Kosovo War, the one-sided pressure campaign of Trump’s administration is likely to have come as a surprise to the small ally. For the first time the US and the EU seem to be at odds with regards to a solution to the Kosovo-Serbia dispute. This became obvious in the days ahead of the vote of no-confidence, when the German and French ambassadors urged LDK to reconsider their motion of no-confidence and act responsibly during the challenging times that the country and the world is facing, while the US Ambassador tweeted that he was ‘pleased’ the vote would take place.

Trump has trusted Richard Grenell, acting Director of National Intelligence, US Ambassador to Germany, and Special Presidential Envoy for Serbia and Kosovo Peace Negotiations to seal the deal. Grenell for his part may not have expected to be met by stubborn resistance from PM Kurti. Right before presidents Thaci and Vucic were to meet in Washington, Kurti stated that he would partially lift the 100 percent tariff imposed on imports from Serbia, which was introduced by his predecessor as a retaliation against Serbia’s aggressive lobbying campaign against Kosovo. Kurti aimed to gradually remove the tariff based on the principle of reciprocity – Serbia would have to return the favor. Both the EU and the US have been against the tariff from the start, but as opposed to European politicians who welcomed the partial lifting of the tariff as a positive move from Kosovo, Grenell did not. Eager to fast-track negotiations between Belgrade and Prishtina, he demanded that Kosovo immediately lift the tariff in its entirety.

Kurti, wary that the deal the US is looking to push through might entail a land swap between Kosovo and Serbia along ethnic lines, which threatens to destabilize the whole Western Balkan region, refused to bow down to Grenell’s demands. This, in turn, led to new pressure and threats from Trump, Grenell and their supporters. US Senator David Perdue tweeted that the US should consider withdrawal of US troops stationed in Kosovo as a retaliation measure, should Kosovo not remove the tariff. More notably, the message was retweeted by Grenell, and even Donald Trump Jr. joined in on the conversation tweeting: “There are 650 US troops in Kosovo. Time to get them home.” The US threats made Kosovo politicians afraid of the consequences of losing US backing under the Trump administration. Understandable, given that it is a young state in need of the backing that a great power can provide.

By the time the negotiations resume, Kosovo might find itself in the optimal situation with a new US administration at the helm, aligned with the EU once again, in the efforts to mediate a deal between Kosovo and Serbia.

However, Trump and Grenell’s one-sided pressure on the weaker side in the Kosovo-Serbia dispute, and the lack of pressure on the historical aggressor, reveals an oversimplification of the situation at hand. Trump and Grenell thinking that the tariff is what stands in the way of a deal between Kosovo and Serbia, and therefore effectively driving the events that lead to the toppling of the legitimately elected government, exhibits a gross lack of knowledge about the issue at hand, not unlike the one exhibited in Trump’s other diplomatic endeavors. Why would Belgrade suddenly adhere to the US, when it has successfully managed to undermine EU for the last decade? All evidence point to the fact that Serbia will never be satisfied with any deal that confirms Kosovo’s statehood. ‘Kosovo je Srbija’ (Serbian for ‘Kosovo is Serbia’), is still the slogan which all top politicians in Serbia base their rhetoric, election campaigns, and actions towards Kosovo on. Serbia has played its cards right, stringing the West along and all the while cozying up to its number one ally in the East – Russia. Therefore, the EU has failed in their mediation and the Trump administration will follow suit. It might get a deal in place, but it will not be a sustainable one. But knowing Trump, the most important thing is securing that trophy no matter how shallow it may be.

There could actually be a silver lining for Kosovo in the bleak situation following the fall of the government.

Kosovo has  continuously been let down by the EU, which in an effort to avoid pushing Serbia toward Russia has played nice with Belgrade. Seeing that the US is now going one step further than the EU, in pushing for a hasty deal, there could actually be a silver lining for Kosovo in the bleak situation following the fall of the government. Without a government in Kosovo, reaching a deal between Kosovo and Serbia will be even more difficult. Kosovo’s constitution calls for election within 45 days, but with the current pandemic an election is unlikely to take place anytime soon. Another more likely option is that the fallen government continues to work as a caretaker government. However, a caretaker government does not have the power to sign a deal between Kosovo and Serbia. These circumstances may just mean that Kosovo, by default, has one-upped Trump & co., postponing negotiations and avoiding a deal that would have been damaging for Kosovo’s statehood and stability in the region. By the time the negotiations resume, Kosovo might find itself in the optimal situation with a new US administration at the helm, aligned with the EU once again, in the efforts to mediate a deal between Kosovo and Serbia.

[…] troops in Kosovo that have been essential to Balkan security since 1999. This was a major factor causing the Kosovo government of Prime Minister Albin Kurti to fall as the COVID-19 virus spread through the region. Kosovo is now ruled by a weak caretaker […]